As children across the country head back to school, WalletHub — a personal finance website — has released data comparing the quality of education in the 50 states and the District of Columbia in its annual report “States with the Best & Worst School Systems.” 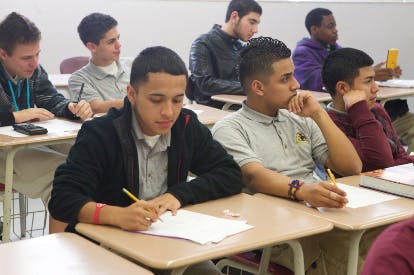 At the top of the list for best-performing public schools in the country is the state of Massachusetts, followed by New Jersey, Connecticut, Vermont and Wisconsin, respectively. Louisiana is at the bottom of the list, but the District of Columbia is ranked at 47, followed by Arizona, Alaska and New Mexico.

“This is really not new news,” says Jill Gonzalez, an analyst with WalletHub, who has been publishing the list for the past three years. “I think it comes down to property taxes and which states are paying for quality education.”

That reality is troubling to Dr. James L. Moore, the EHE Distinguished Professor of Urban Education and executive director of the Todd Anthony Bell National Resource Center on the African American Male at The Ohio State University.

“Across the United States, neighborhoods, schools and poverty are inseparably interconnected. It is well-documented in the social and behavior science literature that children who reside in communities with high levels of poverty and racial segregation are more likely to experience a lesser quality of life than those who live in more affluent neighborhoods.

“The opportunity structures in high-poverty communities are uneven and unbalanced with more affluent communities,” says Moore, who is the co-editor of the newly released book Gifted Children of Color Around the World: Diverse Needs, Exemplary Practices, and Directions for the Future. “Too frequently, Black and Latino children live in these high-poverty communities and are forced to attend the schools zoned in these neighborhoods, where there are vast differences in school quality and neighborhood characteristics.

“Generally speaking, one’s ZIP code determines the quality of education children will receive in America. Although some states have made greater attempts to address the problems than others, we still have a long way to go in America to ensure that all kids are provided a quality education.”