If Dr. Bill Cosby’s greatest contribution to the Black community was his creation of The Cosby Show, then the spin-off  to the popular 1980s television sitcom about a fictitious historically Black college in Virginia named Hillman almost certainly comes in close behind.

Even as the 79-year-old actor and comedian faces mounting legal challenges, few — both Black and White — can deny the longevity and incredible success of his television creations, in terms of reshaping and redefining the lived experiences of Black people in America. 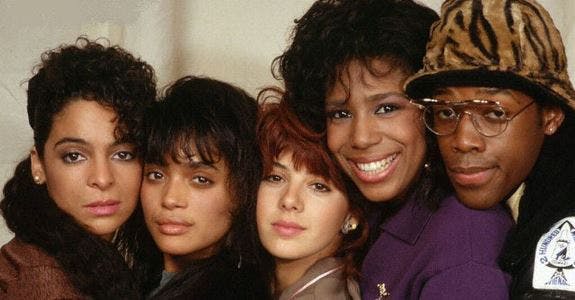 The original cast of A Different World in its first season.

And while The Cosby Show has been yanked from syndication amid the ongoing allegations that Cosby sexually assaulted dozens of women dating back to the 1960s, A Different World — which launched on NBC almost 30 years ago — continues to be popular, even among current high school and college-age students who were born long after the show ended.

“My desire to have the Black college experience and attend an HBCU has definitely been shaped by A Different World,” says Khadijah Wells, 17, a high school senior who lives in Philadelphia and watches reruns of episodes on channel TV One nearly every day. “My mom and I still laugh at the same jokes. It’s a show that I think really helps to bridge the generations. It shows the positive side of Black life and I think that’s very important right now.”

As Wells begins the process of applying to colleges this fall, she’s already made up her mind that she only wants to attend an HBCU. Spelman College, Claflin, Howard and Hampton universities are all on her list.

Wells’ admiration for the sitcom that ran from 1987 to 1993 and brought fame to its cast members such as Jasmine Guy, Kadeem Hardison and Darryl Bell is hardly surprising to Dr. Walter Kimbrough, president of Dillard University, a Black college in New Orleans.

“I think A Different World is powerful even in syndication today, especially over the past year where we’ve seen so much tension on college campuses,” says Kimbrough, who points out that, from the debut of The Cosby Show in 1984 until the end of A Different World in 1993, American higher education grew by 16.8 percent. During the same time period, HBCUs grew by 24.3 percent.

This spike in enrollment at HBCUs isn’t a coincidence, says Dr. Marybeth Gasman, director of the Center for Minority Serving Institutions at the University of Pennsylvania and an expert on HBCUs.

“A Different World brought HBCUs into the mainstream and presented them in very positive ways on a regular basis,” says Gasman, who is also a professor of higher education in Penn’s Graduate School of Education. “­The show was made with care and demonstrated the ethos of HBCUs. Viewers got a chance to see the diversity among African-Americans.”

Cosby, who along with his wife Camille, donated $20 million to Spelman College, was intentional with the message that he wanted to send, consciously hiring an all-Black cast and Black writers to craft the scripts. Actress and choreographer Debbie Allen — who graduated from Howard University along with her sister Phylicia Rashad, who played Cosby’s wife — served as the show’s primary director.

For Kimbrough, who enrolled at the University of Georgia in 1985 and later earned graduate degrees from Miami University and Georgia State University, he initially questioned his college experience after watching the weekly show.

“Since I attended PWIs, my friends and I often wondered aloud what we were missing,” says Kimbrough. “­That was probably why I went to many ­Thursday night parties at Fort Valley State and on road trips going to Alpha [Phi Alpha] regional conventions we hung out at HBCUs.”

For Dr. Bryant T. Marks, director of the Program for Research on Black Male Achievement and an associate professor of psychology at Morehouse College, he says that the show was critical in his decision to attend Morehouse as an undergraduate.

“­The show exposed me to the day-to-day life experiences and activities of college life both inside and outside of the classroom,” says Marks, who is also a presidential advisor to the White House Initiative on Educational Excellence for African-Americans. “In addition to the humor, it dealt with serious topics such as racism, fatherhood absence, interracial dating, Black history and culture, and having the courage to pursue one’s passion.”

Michael H. Seaberry, a recent graduate of Xavier University, says that he’s watched every episode of the sitcom. Although he was born in 1992 as the show was winding down, he’s ordered the whole series on DVD and just began watching the first season again.

“I think, for me, what I liked most was the camaraderie between the characters,” says Seaberry. “­They were like a family at this school. ­The show featured every aspect of college you can think of, from relationships to classes, to the hardships. It gave me a 360-degree view of HBCUs.”

Dr. Eddie S. Glaude, chairman of the Department of African American Studies at Princeton University, says that the show was a visual representation of the experience that he was feeling as a student at Morehouse at the time.

“We felt an intimate part of that show because we knew it was based on Morehouse and Spelman,” says Glaude. “And the show tried its best to capture the beauty, cultural power and politics of an HBCU experience. It affirmed who I was as a man of Morehouse. It was a precious movement.”

But like others, Glaude is concerned by the steady decline of HBCU enrollment. “HBCUs were flourishing in the 1970s and 1980s. Now, only 9 to 11 percent of Black students attend them.”

Seaberry and others, like Kevin Lee, a junior at Paul Quinn College in Dallas, worry that, as the years pass and the show is shown less on the television screen, a whole new generation of youth won’t understand how radical it was to have a weekly television show focused squarely on Black colleges nearly three decades ago.

“­The show was very realistic,” says Lee. “A lot of what I’ve experienced since I’ve been at Paul Quinn are situations that actually happened on the show. It’s a show that I’ve been able to relate to in a meaningful way.”