In India, teachers are highly respected. Growing up in a town about a hundred miles from New Delhi, Dr. Sardar Yousufzai was surrounded by educators, many of whom worked in the sciences. With influences from both his society and relatives, Yousufzai set forth on a path that has led to his position as an assistant professor in the Division of Natural Sciences at Paine College in Augusta, Georgia. 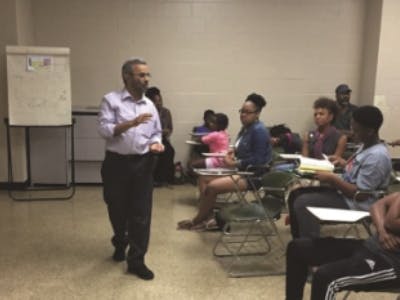 As a professor, Yousufzai not only educates students who attend the historically Black institution, but he introduces science to younger students in the Central Savannah River Area. This summer, he is celebrating a decade of hosting a free summer chemistry camp for middle school and high school youth.

Yousufzai was introduced to science at an early age by his brother-in-law, who had a “compassionate and loving style of teaching,” he says. In response, he “became fascinated to learn.”

During the summer camp, Yousufzai mimics this approach by providing a mix of basic instruction and demonstrations. “I make chemistry like a pie, so easy to eat, so easy,” he says. The program began in 2006 with three or four students and has grown to about 100 participants each year, courtesy of Yousufzai’s simple formula.

In 2008, Yousufzai joined the American Chemical Society, where he is a local chapter chairperson with the responsibility of organizing programs to promote chemistry in minority communities.

Along with Paine College, the ACS has been a resource to ensure that the summer program is free for students. And while he asks parents for donations, they are not mandatory, “so it’s not a burden for anyone,” he says. Garnering a love of plants and animals in his youth, Yousufzai went to study science at Agra University, where he earned a bachelor’s in chemistry in 1967. In order to become a professor in India, Yousufzai furthered his education, receiving a master’s in microbiology and organic chemistry from Pantnagar University in 1971; a master’s of philosophy in biochemistry from Aligarh Muslim University in 1975; and a doctorate in biochemistry from Aligarh Muslim University in 1977.

After working as a lecturer in India, Yousufzai received a scholarship to become a research associate at the University of Wisconsin–Madison. He worked in the Departments of Physiological Chemistry and Nutritional Sciences from 1978 until 1982.

He then transitioned to an assistant research scientist and assistant professor at the Medical College of Georgia.

As an immigrant living in America, Yousufzai set a goal to educate minority students. This has made his past 16 years at Paine College especially rewarding, he says. After teaching at the college level for several years, Yousufzai took a life-changing trip to a classroom in the Richmond County Public School System in Virginia. While explaining his profession to fifth-grade students, he learned that few of them wanted careers in chemistry, engineering or technology.

This prompted Yousufzai to begin his summer camp series with the goal of teaching the basics of chemistry — everything from the periodic table and properties of matter to formulas and conversions — in an approachable manner. “No subject is a hard subject — the teacher has to make it easy in such a way the student starts to like it,” he says.

Those who stick with the course, though, feel very comfortable with chemistry in the end, he says. “I’m really pleased that students are interested, students do not feel bored, and they feel as if they are learning.”

One of Yousufzai’s greatest achievements is having former program participants come back to his classroom. Years later, many of his protégées are in medical and dental school. “I introduce my younger students to them and say, ‘He was here five years ago, he was like you. And you will be the same,’” Yousufzai says.

The summer camp is not only a learning experience for youth, but for Yousufzai. “It helps me to teach the college students,” he says.

Because some of them “are not in the stage to understand the college level” of science, Yousufzai sets aside extra hours during the week for his college students to learn by demonstration, a technique that he uses during the summer.

In the realm of education, Yousufzai says that his goal is to teach students from diverse backgrounds who are willing to learn. “And it is paying me back,” he continues. “I feel really satisfied and really good inside that at least I’m giving something which will help in the future.”