The University of Oregon’s board of trustees has voted to remove the name of a classics professor from a student dormitory on campus because of his affiliation with the Ku Klux Klan. 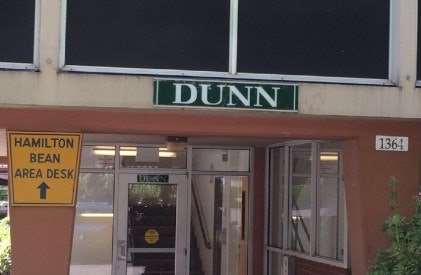 The unanimous vote, which took place late last week, was in direct response to a steady wave of student protests calling for the removal of Frederic Dunn’s name from the building. The trustees decided to temporarily rename the building Cedar Hall.

“Frederic Dunn was the head of an organization that supported racism and violence against African-Americans, Catholics and Jews,” said Dr. Michael Schill, president of the university. “ … No student, particularly no student of color, should have to move into a residence hall named for a man affiliated with one of the most despicable organizations in American history.”

In a statement, Schill said that a process would be put into place to engage with the campus community to permanently rename the residence hall in honor of a “person whose life exemplifies the characteristics of racial diversity and inclusion that Dunn despised.”

Student activists, led by the Black Student Task Force, had been pressuring university officials to make the changes. They are also called for the renaming of another building — Deady Hall. Matthew Deady was one of the founders of the university, but also was a key supporter of slavery. Schill has commissioned a historical report on Deady’s involvement during slavery and a vote on whether to strip his name from the building.

The University of Oregon is the latest institution to publicly take steps to right historical wrongs. In an effort to improve campus climate, a number of other colleges and universities have taken efforts to rename buildings, remove statues or other symbols that represent America’s ugly past.

Georgetown University — the nation’s oldest Catholic University — announced earlier this month that it would begin offering admission preference to the ancestors who were used or sold as slaves by the university. The university also decided to rename two buildings on campus to Isaac Hall, named after one of the victims of the slave trade at the time, and Anne Marie Becraft Hall, named after a Black woman who opened a school for Black girls in Georgetown in 1827.

Rosemary Kilkenny, vice president for institutional diversity and equity at Georgetown, said that the process of bringing together the campus community to address these issues has proven useful.