WASHINGTON — For the past several years, the discussion on college match has focused on helping low-income, high-achieving students avoid “undermatching” and to get the information they need to pursue some of the more selective colleges they are academically qualified to attend. The idea is that by attending institutions with higher completion rates, such students enhance their own chances of graduation. 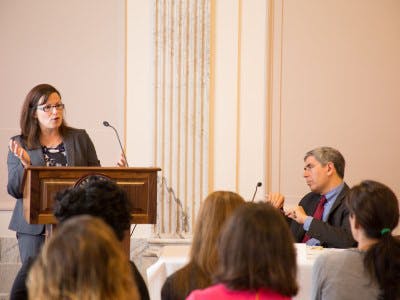 Jessica Howell, executive director of policy research at the College Board, explains the basis of Match 2.0

At a Capitol Hill briefing Tuesday, the College Board helped launch a new book that seeks to take the discussion on college match to the next level and bring about what one expert referred to as “Match 2.0.”

In Match 2.0, according to Jessica Howell, executive director of policy research at The College Board, the emphasis is less about providing students with the information they need to choose the best college and more about widespread institutional improvement so that students have a much broader selection of colleges that are considered good.

Improving college match will improve degree completion rates, but reforming institutions rather than just shifting students to the best ones is key, Howell said.

Howell made her remarks Tuesday on The Hill to help launch a new book titled “Matching Students to Opportunity: Expanding College Choice, Access, and Quality,” a book published by Harvard Education Press.

The book features nine chapters written by a bevy of heavy hitters in the college completion arena.

One of the major contributions of the book is that it seeks to shift the burden of choosing a good college from the student and put more of an onus on colleges to “share that burden” by improving their completion rates, according to Howell, who wrote a chapter titled “What Can We Learn from Stated Preferences, Student Actions, and Collegiate Outcomes.”

Such students, she said, tend to enroll in comprehensive regional colleges or community colleges, so considering their needs will bring a wider range of institutions into the discussion.

Panelist Matthew M. Chingos, senior fellow at the Urban Institute, said the need for institutional improvement is underscored by the fact that most students tend to enroll in universities that are close to home.

He said the federal government needs to “move beyond the mentality of ‘let’s put lots of information out there,’ and think ‘for whom can this information be helpful?’”

Even if students are given information to consider more college choices, Chingos said, a large number of those choices are “constrained by academic preparation and geography in ways that limit the scope of how that information can be helpful.”

“I have been thinking this way for a long time,” she said of the emphasis her institution places on finding the right students.

She said at Eastern — which the Education Trust ranked in 2012 as the college with the most improved graduation rate for Hispanic students — on an academic scale of one to ten, she seeks students who are sevens and eights. While faculty desires the nines and tens, she said, they are apt to transfer to nearby, higher-performing UCONN if they can.

“They are good students and they do well at Eastern, but they are not our best bet. The sevens and eights are,” she said, adding that the sevens and eights may need “some form of academic support but not a lot, so they don’t cost us a lot in terms of support needed.”

“We don’t go lower than six,”Núñez said, because the cost of helping them is “enormous” and her first commitment as a state-funded university is to “keep the dream alive for students from Connecticut.”

Jacqueline Thomas, health and education legislative assistant for U.S. Senator Christopher A. Coons (D-Delaware), said it’s important for the federal government to try to “lift up all schools.”

“There are a lot of discussions going on about what the appropriate role from the federal government to states to universities,” Thomas said. “The Higher Education Reauthorization Act will present a good opportunity to address a lot of these, but we need frank discussions.”

The concept of undermatch, she said, can be a “tricky” one because “every institution presents an opportunity for a certain type of student.”

“What we at the federal level need to be doing is lifting up all institutions to they’re able to serve those students,” Thomas said. Harvard may represent an opportunity for a low-income student, but so does Morehouse, she said.

“The whole reason we invest is we want to promote a window of opportunities,” Thomas said. “We need to ask ourselves at the federal level is the way that we’re targeting those resources promoting opportunity?”