WASHINGTON — After campus protests that followed an incident in which a banana was thrown at a Black female student, officials at American University announced plans to take action this week to develop a “roadmap” that will “radically impact the campus climate in positive ways.”

“Though the development of this roadmap is the responsibility of the university’s leadership, students made clear that they want a greater voice in any decisions that affect them,” Scott A. Bass, provost, and Gail Hanson, vice president of campus life, said in a memo to the American University community that was shared with Diverse. 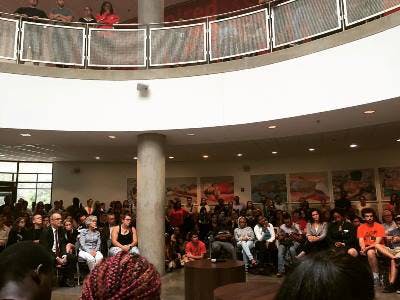 “We will find ways to engage students in the formation of our plans,” the memo states. It also states that AU President Cornelius Kerwin’s Council on Diversity and Inclusion will be invited to “play a role in gathering ideas from the community that will expedite our progress.”

Among other things, the memo outlines plans to increase faculty diversity and revamp the way incidents of racism and bias are reported and dealt with on campus.

“Bias related incidents seldom have identified perpetrators,” the memo states. “We will seek community recommendations to increase reporting and accountability.”

Ma’at Sargeant, a sophomore at American University and president of the Black Student Alliance, said the university’s plans represent a “step in the right direction.”

“But, we have been asking for things like more Black faculty and punishments for racist acts for years,” Sargeant said. “So this email is nice because they use the right language and do a step-by-step process, but we want action.

The situation at American comes at a time when racist incidents have roiled campuses and led to student protests throughout the nation.

For instance, two students at Albright College in Pennsylvania were suspended after posting a video of one of the students in Blackface, twerking and mocking the Black Lives Matter movement.

Also last week, members of the Legion of Black Collegians at Mizzou — where student protests last year led to the ouster of the chancellor and the president — reported being verbally assaulted by White students.

And, if history is prologue, expect to see more such incidents this Halloween, when — historically, at least — some college students and groups have been known to host racially themed parties in which they dress up in the cultural attire of ethnic minorities.

The banana assault incident at American University took place in the wee hours of Sept. 8, and took place the same night that a different Black student on the same floor of the dorm found a rotten banana outside her room and an obscene drawing on the whiteboard attached to her door, according to a news report.

Students protested to demand the administration suspend the students who perpetrated the banana assault.

“We requested the students be suspended, attend a structural racism training, and volunteer at least 10 hours of service for a cultural organization on campus,” Sargeant said. “However, the process has already been completed and the boys were not suspended.

“This sets a precedent that nothing happens when you commit a hate crime and assault toward a minority group on campus,” Sargeant said. “Being that it is finalized, there is no adding to the consequence.

Diverse has reached out to the administration twice in recent days for comment but was only provided with the memo regarding the university’s plans this week to respond to the “concerns” that students raised on campus.

While the memo does not detail or mention the banana incident, it does indicate several “action steps” that the university plans to take.

A significant portion of the memo deals with reviewing the university’s “conduct process and outcomes as they relate to acts of racism and bias.”

“Revisions to the Code will be considered and recommendations will be vetted with the Student Conduct Advisory Committee, which has student members,” the memo states. “Wider student engagement in the Committee’s work will be sought.”

The memo mentions plans to “consider elements of restorative justice in sanctions for bias related incidents.”

The memo also cites plans to create a “worldlier curriculum, responsive to a diverse student body, including more study abroad destinations and more non-Western perspectives in approach to subject content.”

“This issue needs more attention,” the memo states. “Considerable talent exists on the subject of Africa, however, it is spread across a number of schools and colleges. This is true for other subjects that may be of interest to a more diverse student body.”