Two summers ago, shortly after the fatal shooting of unarmed Black teen Michael Brown by a White police officer in Ferguson, Missouri, Dr. Marcia Chatelain’s sadness deepened when she learned that the first day of school for most K-12 students in that area was being delayed. The decision by officials to change the schedule was based on street protests that they feared could jeopardize the safety of youths going to and from school.

So Chatelain took to Twitter. She encouraged college educators whom she already knew to devote part of the first day of the new school year to discussing with students the events in Ferguson and their broader social, political and economic context. Rather than fixate on the individuals involved with Brown’s death, Chatelain saw a chance to help young people better understand the complexities surrounding the tragedy. 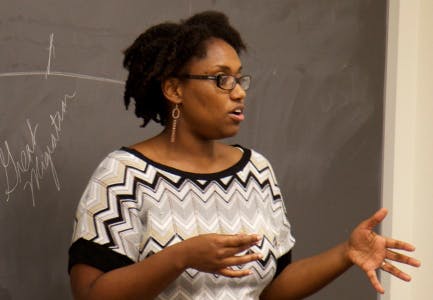 Quite unexpectedly, countless other educators from colleges and from K-12 systems jumped into the Twitter discussion, seeking resources as well as advice on how to facilitate race-based conversations that some of them had never tackled before.

In a matter of days, what emerged was a no-cost, crowdsourced catalog that Chatelain created and curated, titled “Ferguson Syllabus.” It focused on race, African-American history, civil rights and policing, based on suggestions not only from Chatelain but from people representing a spectrum of academic disciplines, geographic regions and educational settings. The catalog continues to be supplemented by Chatelain’s ongoing #FergusonSyllabus campaign, a platform where members of the general public offer and obtain additional tips for classrooms of all age groups.

If not for social media, Chatelain doubts the Ferguson Syllabus would have been assembled so quickly.

“In the old days, there might be little more than a statement from an academic organization, or a panel discussion at the annual meeting of such an association,” says Chatelain, a Georgetown University associate professor of history. “Social media can be a blessing. Perspectives emerge quickly, and plans can be made and be more responsive than if social media didn’t exist. The digital landscape has given us a much more expansive media landscape, which makes us better in these moments.”

The original Ferguson Syllabus features works from urban history, White flight, school desegregation and unrest in the 1960s. The catalog lists books such as Alex Haley’s The Autobiography of Malcolm X and Dr. Carter G. Woodson’s The Miseducation of the Negro as well as titles for elementary-age children such as Brad Meltzer’s I am Rosa Parks and Michael Tyler’s The Skin You Live In. There are also films, poems, newspaper and magazine op-eds, and commentaries from bloggers and hashtags like #IfTheyGunnedMeDown.

Since the Ferguson Syllabus took root, Chatelain has urged educators outside of African-American history and the social sciences to feel confident about tapping into their subject expertise in order to engage students into talking about race. For instance, a chemistry professor could explain how and why tear gas hurts people, its long-term effects on the human body and subsequently lead a discussion about law officers using it in minority communities.

The feedback has been impressive, Chatelain says, whether it has come from parents or high school guidance counselors. A math professor, for example, assigned his students to examine Twitter analytics for how the hashtag was used by people other than Chatelain and on what dates the hashtag’s usage spiked, such as during the aftermath of other incidents of police brutality against people of color.

Chatelain took a page out of her own digital playbook two years ago by weaving Ferguson-related lessons into class discussions at Georgetown.

For an African-American food and culture course, she introduced the subject of the delayed school year for Ferguson’s youth by explaining that the postponement meant students could not access free- and reduced-lunch and breakfast programs that they normally did. That led to talks about the history of such meal programs in this country, and how poverty is — and isn’t — addressed in communities.

For an African-American women’s history course, Chatelain engaged students in talks about female leaders who emerged after Brown’s death and in certain aspects, the absence of women from the response to what happened in Ferguson.

This academic year, Chatelain is teaching a course on race and history along with an introductory course in African-American studies. With U.S. presidential campaigns in full swing, she is facilitating class talks about how the the Black Lives Matter movement is shaping the political landscape this election cycle.

“I want them to see the links between each major presidential candidate and what’s going on,” she says of Black Lives Matter. “What happened two years ago (in Ferguson) still reverberates.”

Chatelain has discussed social movements and inclusive teaching as a guest speaker at other universities and academic gatherings. For instance, she is one of the keynote speakers at the annual meeting of the Association for the Advancement of Sustainability in Higher Education, which occurs Oct. 9-12.

“Our members are increasingly seeking to support social and environmental justice in the communities around their campuses,” says AASHE executive director Meghan Fay Zahniser. “Meeting sustainability challenges requires an understanding of issues that are impacting these communities and collaboration with community stakeholders. Dr. Chatelain truly exemplifies that in her work.”

Chatelain, in turn, has learned from her students.

“I try not to assume what millennials are thinking,” she says. “They are very much researched but not listened to very much. They have taught me that they want to be part of the transformation, but that it isn’t easy. Despite this being the Digital Age, a freedom struggle is still a struggle. Students are inspired by history and want to know what worked during the civil rights movement and what did not. It’s confirmation of how important it is to know our nation’s history.”

She points out that most of today’s college undergraduates “have only known of a Black president in this country during their formative years. I’m increasingly sensitive to the difference in reference points. We think of this generation as one who can solve problems but we as educators need to spend time learning the context of where young people are coming from because there’s a cognitive dissonance.”

Since the time that Chatelain curated and launched the original Ferguson Syllabus, separate hashtag campaigns have emerged in response to police-involved fatalities of unarmed African-Americans, such as #BaltimoreSyllabus and #ChicagoSyllabus. As classroom discourse continues, so do protests in cities, on college campuses and on playing fields against police oppression of people of color.

Chatelain is glad that students are exploring these topics in class — and that growing numbers of educators are willing to let them do so. She still recalls feeling overwhelmed in 1992 when, as a middle-school student, she watched TV news footage of the Los Angeles riots that erupted after four White police officers were acquitted in the beating of Black motorist Rodney King, an incident that was caught on video. With no digital platforms in existence at that time, scholars could only be interviewed for short TV or radio news sound bites.

“It would have helped if we had spent time in class talking about it at the time,” Chatelain says.