In the ongoing fight against sexual misconduct on college campuses, those who simply advocate a just and fair system can claim a victory this week in Delaware.

Wesley College in Dover, Delaware, is one of the first colleges in America to have been found in violation of the sexual violence and sexual harassment provisions of Title IX when it comes to protecting the rights of accused students. 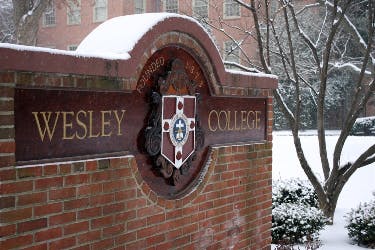 In an official release, the U.S. Department of Education’s Office for Civil Rights (OCR) found that a Wesley College student accused of sexual misconduct “was not provided a full opportunity to respond to the charges, rebut the allegations, or defend himself at his hearing.”

The investigation prompted the announced agreement between the OCR and the college.

“With this agreement, Wesley College undertakes a strong commitment to equitably address sexual violence and sexual harassment for all parties, including both accused students as well as accusers, consistent with the fairness mandate of Title IX,” said Catherine E. Lhamon, assistant secretary for civil rights. “I look forward to continuing to work with Wesley College to support its efforts to ensure student safety, including through promoting processes all students can believe in to protect their rights.”

The OCR’s investigation focused on a complaint by a student accused of sexual misconduct who claimed the college did not fully investigate the allegations against him. The student said he was wrongly charged and expelled within seven days in April 2015, prior to his graduation. The investigation found three other students were similarly accused and punished in connection to the case.

The OCR concluded Wesley failed to give the accused students “essential procedural protection” in violation of Title IX, as well as violated safeguards within the school’s own disciplinary policies.

The case reportedly involves a male student who had consensual sex with a woman that was streamed live to fraternity members. The filming, however, was not agreed to by the woman. The live streaming was alleged to have been set up by three other male students.

The four men involved were all found guilty by the school and expelled within a week of being accused. But, as the OCR investigation found, the cases were disposed of far too quickly for the accused to be afforded the proper protections of Title IX.

Wesley, a school of 2,500 students, will now by the agreement reinvestigate the original male student involved, as well as the three other male students. The college will also provide training for students and staff, and assure the OCR of its compliance with Title IX.

It’s become a more common realization that, aside from the factual disputes of any “he said-she said” battle, the bigger concern is a school’s compliance with Title IX’s fairness provisions.

The Wesley College case may begin to show that due process for all is no trifling matter. As complicated as Title IX has become (and some say it’s unworkable), one must continue to believe that, at its core, it is still the protection of rights of both the victim and the accused.

Emil Guillermo is a veteran journalist and commentator who writes at www.aaldef.org/blog.