A highly motivated group of Rutgers University seniors are hard at work on their final year of college and preparing for life after graduation. These students are attending Rutgers, the State University of New Jersey, on full scholarships, an opportunity presented to them in middle school when they were selected for the Rutgers Future Scholars program. 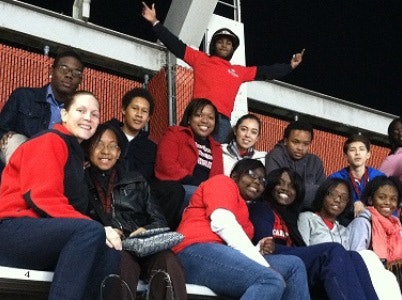 Rutgers University identifies 200 seventh graders from low-income families in New Jersey and assures them full scholarships if they meet admission criteria when eligible.

“Rutgers does a lot to build pathways for low-income students,” says Courtney McAnuff, vice president for enrollment management at Rutgers, who helped create the Future Scholars program in 2008. “We take 200 seventh graders whose families are low income or on welfare in New Jersey and we offer them full scholarships to Rutgers in seventh grade provided they can gain regular admission.

“We bring them to campus every summer right through high school for four to six weeks for academic work that gets more rigorous as they get older,” he adds. “Each of our schools contributes. We’re trying to show these kids there are so many opportunities in postsecondary education. … They take everything from history to expository writing.”

McAnuff grew up in Queens, New York, and attended the highly competitive Brooklyn Technical High School. Although he says he doesn’t remember an advisor ever speaking to him about college and his parents hadn’t attended college, McAnuff says his friends were going so he decided he should also go. With good grades at a highly competitive high school, McAnuff was admitted to City College, part of the CUNY system, where he majored in math and psychology.

After college, McAnuff landed a job at the State University of New York at Farmingdale as a math instructor, but the position didn’t have any job security. When the school offered him a full-time job with benefits in the financial aid office, McAnuff took it, beginning his career in administration.

Then he accepted an offer at Eastern Michigan University to be director of financial aid. He only intended to stay three years but remained there for 25 years and rose to vice president of enrollment management. It was a great place to raise a family and the high quality of the public schools enabled his children to excel, McAnuff relates.

The student body at Rutgers is incredibly diverse, McAnuff says, maybe the most diverse school in the country.

“We work at diversity; it doesn’t just happen,” McAnuff says. “Diversity is rural, suburban, urban, domestic, international and gender. The honors college, which started last year, would be a great example of how Rutgers works diversity.” 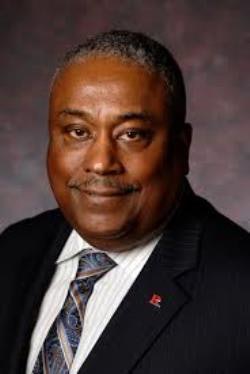 In the honor school, 10 percent of the students are African-American, 11 percent are Latino and 20 percent are Asian. He says it proves diversity and excellence are not mutually exclusive, but it does take significant institutional effort.

McAnuff says Rutgers’ first-year retention rate is approximately 93 percent and the hope is to raise it to 95 percent. There are writing and math centers, mental health counseling and other services. The institution is proactive in reaching out to students and helping alleviate potential problem areas.

“The federal government requires a 25 percent match for college work-study. We match 100 percent, so we can offer more low-income, first-year students the opportunity to work on campus,” he says. “An on-campus work experience tends to correlate to greater retention and graduation rates.”

This year, Rutgers is also introducing new software that is installed on students’ phones that allows them to ask for help. If a student is having trouble in a subject, he or she can request a tutor. Someone struggling with anxiety or depression can request counseling. If a student asks for a transcript, the software will prompt a question as to whether the student is having a problem he or she would like to discuss.

“Although Rutgers is a big school, we try and make it feel smaller by making sure that students are in smaller groups with affinities,” he says.

First-year students may take one-credit courses called Byrne Seminars, which are taught by tenured and tenure-track faculty. These introduce students to some of the extensive research that goes on at the university.

All of these programs, including an intensive six-week course for incoming freshmen who may have some academic challenges, require an investment from the university.

There has also been corporate support from companies such as AT&T and Merck.

“My role is to support access,” says McAnuff. “This is a demanding institution with very high credentials, so part of my job is to make sure that the university is invested in pipeline programs.

“There is a lot of fulfillment in helping young people and actually changing their lives,” he adds. “One of the things that we’re committed to is making sure that students, especially low-income students, have opportunities.”