If anthropology professor Julia King had her way, an old plantation in the quiet town of La Plata, Maryland, would receive a historic marker that pays homage to a runaway slave-turned-abolitionist minister who seldom gets his due. 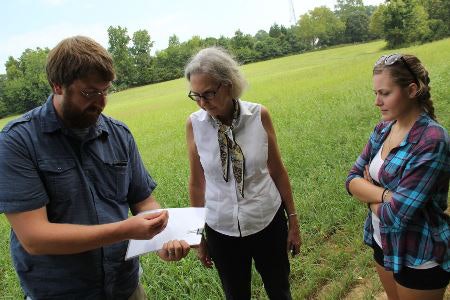 Anthropology professor Julia King, center, and her team concluded that the onetime plantation in La Plata, Maryland is the likely birthplace of Josiah Henson.

That’s because — through research and an archaeological dig this past summer — King and some of her current and former students concluded that the onetime plantation is the likely birthplace of Josiah Henson, a figure whose narrative is believed to have inspired Uncle Tom’s Cabin, the much-heralded anti-slavery novel by Harriet Beecher Stowe.

“Ultimately, we want ‘Henson’ to roll off everyone’s tongue much like ‘Tubman,’ ‘Washington,’ or ‘Lincoln’ do,” King, who teaches at St. Mary’s College of Maryland, told Diverse.

“Our goal is to see this property preserved and to hear more about Henson,” King said during an interview underneath a tree near the big house on the plantation. “There’s a huge community of people who don’t know who this man was.”

King is by no means alone in her effort, which has drawn support from the Charles County NAACP.

“­This is extremely important for African-Americans in Charles County, especially our young people,” said Janice Wilson, president of the Charles County branch of the NAACP. “History is vital to future success and the history of Josiah Henson must be told to students here in Charles County and beyond.”

Truth behind the tale

A sad irony is that, while Henson struggled to find freedom for himself and for his family and ultimately became a major figure on the Underground Railroad, the fictional character that his narrative inspired — Uncle Tom — has become a pejorative that African-Americans often use to brand their brethren who are seen as race traitors or too subservient to Whites.

­Thus, in order to embrace the cause for Henson, one has to look past the strange evolution of the term “Uncle Tom” and realize that Henson not only predates the term but led a remarkable life that would exempt him from the term’s contemporary application. Henson, after all, is credited with having led more than 200 slaves to Canada and set up a settlement for fugitive slaves, where they learned trades, raised their own crops and had lives of self-sufficiency, according to his biography on the African American Registry, a nonprofit education organization.

“I would love for his story to be shared for others to know of his resilience, faith and devotion to his family while living under deplorable conditions as a slave,” said Wilson, who adds that she would like to see Henson’s story featured more frequently and more prominently in schools both local and nationwide.

“Even under these extreme circumstances, he found the strength to help others along the way,” Wilson said. “His story is an inspiration for everyone.”

Professor King said one of the best ways to honor Henson’s contributions to the African-American struggle for freedom is to recognize his birthplace, much like the birthplaces of George Washington and other historic American figures are recognized.

­The lessons that Henson learned here in La Plata were unlike anything that Washington experienced in his birthplace in Virginia.

“As was true for so many enslaved children, Henson’s earliest conscious memories were of the most dreadful and bloodiest moments of slavery,” states one report on his early years.

It recounts how Henson was born in 1789 on the plantation here that at the time belonged to Francis Newman, and how his earliest memory was that of his father with “his head bloody and his back lacerated” — the result of his attempts to rescue his wife, Henson’s mother — from an “assault” from an overseer.

His father was later “sold south,” and Henson ultimately ended up in Montgomery County, where the plantation in which he lived has since been turned into The Josiah Henson Park, which is part of the National Park Service National Underground Railroad Network to Freedom program.

While Henson has been recognized in Montgomery County, King’s work to win Henson recognition in Charles County is still in its early stages.

The work that King and her team did on the former plantation where Henson is believed to have been born was in a wooded area about a stone’s throw from the big house.

Once there, they set out to do “ground truthing” in order to find artifacts from Henson’s era.

They found bricks indicative of a fireplace or remnants of slave quarters, as well as ceramics from the late 18th century.

“When we saw these patterns and what were ceramics dated to the late 1700s, and [realized] these are probably quarters, this is when we realized this is where Henson was born,” King said. “We didn’t find an artifact that says ‘Josiah Henson was born here,’ but we know this was a complex of quarters.”

When asked if her evidence was lacking that the plantation is actually where Henson was born, King said, “In my profession we like to say, ‘It’s strong enough.’”

“We know that Henson is enslaved on this plantation. If he’s not born there,” she said, gesturing to the presumed site of the former slave quarters, “then the challenge is to tell us where he’s born.”

The dig gave students the chance to receive practical experience in their field.

“I’m very interested in archaeology. I think it’s important that rich White men are not always the ones being studied,” King said. “I like finding out the stories that aren’t told in the textbooks.”

Even high school students such as Jakob Gammons got in the action and decided to focus on the application for a road marker. The Charles County Branch of the NAACP selected Gammons as one of two African-American archaeological interns to work on the project.

King said the historical marker application that Gammons is working on is essentially “ready to go” but that she is waiting on a final report on her findings before she submits the application for the marker to the Maryland Department of Planning.

“This is because, as you drill into the webpage, you will see that ‘accuracy is paramount,’” King said of the Department of Planning’s website on historical marker applications. “A completed site report will ensure that.”

King said it should be submitted in October, and Gammons will be listed as senior applicant on the proposal.

“Out of this experience I have gained knowledge about the importance and the history of Josiah Henson,” Gammons said. “This is important to me because I feel like Josiah Henson should have his spot in history recognized.”