The election is still to come, and who knows what will happen as polls tighten in the key battleground states.

But at least one major university has already taken a key theme of this campaign seriously. 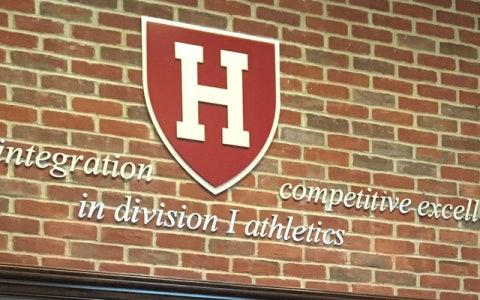 The scouting report, written in 2012, was until recently still searchable and shared on Google. But the school investigated and discovered that, even this year, the practice of ranking female players by sex appeal was still in place.

The team has apologized for its actions in the college newspaper.

But the incident shows how pervasive and deeply rooted sexism continues to be in society. Even as the country could elect its first female president, sexism at a prestigious school as Harvard remains as Trumpy as any other school in the land.

It’s not that different from the realization that racism didn’t end after an Obama election.

In fact, should Hillary Clinton win on Tuesday (and that’s still a big if), somehow I doubt we will all be talking about a new post-sexist society on Wednesday.

Still, the Harvard news is encouraging in a time when major universities (including Harvard) have been notoriously slow to act on actual rape and sexual assault, as in cases involving football players at Florida State University and, most recently, Baylor.

Those schools, however, had egregious instances that went far beyond mere sex-charged words.

In the Harvard situation, we have more of the old-fashioned “boys-will-be-boys” talk, heretofore deemed acceptable.

Harvard’s example of not tolerating the talk before it becomes an action may be the best way a school lets its students know it means business when it comes to sexual assault.

“Even at a college with very smart and generally very politically progressive students, you can still have this kind of really unexamined male entitlement,” Mary C. Waters, chair of Harvard’s sociology department, told The New York Times. “They are not bad people; they’re young men and they’re hyping themselves up,” she said. “They don’t show their vulnerabilities to each other. And when they’re together, they’re trying to be tough and show how strong they are, and part of that is still tied to ideas—that are troubling to me at least—about men and sexual dominance over women.”

Others may want to continue to dismiss the whole incident as guy talk or maybe rail against Harvard as a school being overly PC, or even being anti-First Amendment. (If the KKK’s racist speech is protected, should athletes’ sexist speech be too?)

You might even dismiss the Harvard story because it was, after all, the men’s soccer team—and an Ivy League one to boot.

It wasn’t a major revenue sport like football in a school that has million-dollar coaches.

But that shouldn’t matter.

Harvard already knew it was no different from other schools on the issue of sexual assault after a survey of its class of 2015 found 31 percent reporting unwanted sexual contact.

By addressing outward signs like locker room talk in a stern but reasonable way, Harvard seems to have set a good example for other schools.

It’s also learned what could be one of the enduring lessons from campaign 2016.

President Obama was a key surrogate for Hillary Clinton last week. But beyond getting out the vote, he was frank about sexism.

“Hillary Clinton is consistently treated differently from just about any candidate I see out there,” Obama said during a stump speech in one of the key battleground states.

“To the guys out there,” the president continued, “I want to be honest. There is a reason we haven’t had a woman president before. And I think that, sometimes, we’re trying to get over the hump and we have to ask ourselves as men, because I hope my daughters can achieve anything they want to achieve, and I know my wife is not just my equal but my superior.”

The president was interrupted by loud cheering.

“I want every man who’s voting to look inside yourself,” the president said. “If you’re having problems with this, how much is it because we’re just not used to it. So that you know, when a guy’s ambitious and out in the public arena and working hard, that’s OK, but when a woman suddenly does it (we ask) why’s she doing that? I’m just being honest.”

“I want you to think about it because she is so much better qualified than the other guy,” the president said. “This notion it’s hard to choose. It shouldn’t be.”

Except for sexism, that is.

Emil Guillermo is a veteran journalist and commentator who writes at http://www.aaldef.org/blog