Having free time is increasingly rare, Dr. Judy K. Sakaki explains, as she ticks off an increasingly demanding list of tasks as a higher education leader—a job that she embraces with pride and enthusiasm. Taking one of those infrequent breaks, she pauses to put her story in context. 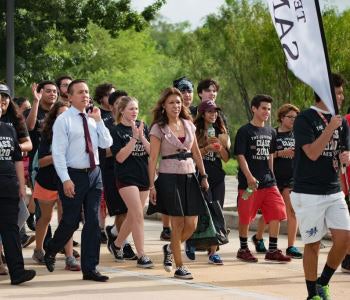 Dr. Cynthia Teniente-Matson, president of Texas A&M University-San Antonio, leads the Jaguar March on campus, celebrating the start of the year for the university’s first roster of freshmen.

In her hometown of Oakland, Calif., her school counselor “told me I would be good in retail sales,” Sakaki recalls, looking at her future if she followed the counselor’s advice and stayed at her job as a youth.

Today, Sakaki, 63, is president of Sonoma State University, a post she started this past July after a steady track of service and achievements in the California State University System. She is the first Japanese American woman to head a four-year institution of higher education in the United States.

Sakaki says those teachable moments she experienced as a child have since propelled her to achieve her pursuits and share the possibilities with the generations she now leads at Sonoma State, with more than 9,000 students, 500-plus full- and part-time teachers and a $110 million annual operating budget.

“It has been good, fun, exciting,” says Sakaki of her new responsibilities.

“I got my start because someone reached out to me,” says Sakaki, recalling encountering someone beyond her counselor who told her she had the potential to do better. She plans to use her job to extend a helping hand.

Sakaki is one of more than a handful of presidents who are replacing relatively new presidents who were not in sync with the institution governing boards that hired them. This group also includes recruits for new posts at expanding institutions.

The new chiefs and their peers are inheriting a myriad of challenges, many of them new to this generation of presidents, including the political retreat from steady support of higher education to the impact of a minute-by-minute, 24-hour social media landscape.

In Texas, like California, the higher education landscape forecasts more and more academic and financial hurdles for students. Dr. Cynthia Teniente-Matson, a San Antonio native who grew up and received her college education in Alaska, says she’s ready for the challenge.

“Texas A&M-San Antonio is five miles from where I grew up,” says Teniente-Matson, a first-generation college student. Much to her disappointment, her South Side neighborhood in San Antonio “hasn’t changed very much.”

That fact, among others, might be discouraging to some. To Teniente-Matson, it reinforces her desire to make a positive difference, as the second president of the new, full-scaled Texas A&M University-San Antonio campus.

Since starting her job in early 2015, Teniente-Matson has helped to build the A&M center into a four-year institution. This fall, she welcomed her first freshman class of 505 first-time college students, 82 percent of them Hispanic or Latino.

“My priority is student-centered, so we can build a system toward completion in four years,” says Teniente-Matson.

To start, Teniente-Matson received fiscal resources from the state needed to “build a model to scale,” she says.

Teniente-Matson drew upon 20 years of managing under tight budgets, most recently in the California State University System.

She notes that her finance background will be an asset, as she further focuses attention on academics. She also touts her “Finish in 4 Graduation Pledge,” a focused initiative to help students complete their four-year degree in four years through a balance of student responsibilities and structured advising and student roadmaps.

Getting students on “Jaguar Tracks”—a study course plan named for the university’s mascot—and hiring additional academic coaches are all part of the expanded enrollment, development and retention plan, she says.

The racial, social and economic diversity “within this very diverse community we serve is not a challenge,” says Teniente-Matson. “It’s an opportunity” to boost service to a community historically underserved, she says.

Dr. Ronald Crutcher doesn’t count himself among rookie presidents. He is among a growing team of presidents who won’t retire from a responsibility they love, despite having worked as a higher education leader in less stressful times.

At age 69, having retired from a decade as president of Wheaton College in Massachusetts, Crutcher is now putting his knowledge and energies to work as president of the historic University of Richmond, the private liberal arts college founded in 1830.

While he was presented with a variety of opportunities to work in the arts community and to possibly run another university, Crutcher says that the University of Richmond opportunity intrigued him.

With such an opportunity, Crutcher, a distinguished classical musician, took the helm at Richmond, becoming the first Black president of the institution.

In many respects, his challenges may be different than those of most presidential peers, Crutcher admits. The institution has a more than $2 billion endowment, with income to help it meet its annual budget and expenses. Most students come to the university ready and able to pay most, if not all, of its costs. His challenge is to protect that standing while expanding the university’s culture and outreach.

That demographic change necessitates the university “use that rich diversity to change the culture of the university” in ways that help it increasingly embrace and sustain its future, says Crutcher.

Under Crutcher’s leadership, the university has hired a communications officer with rank to “market the whole university,” he says, noting past marketing efforts have successfully focused on particular segments of the institution, such as its 500-student law school program. In addition to the enhanced marketing efforts, more communication with “our constituents” is planned, he says.

He also wants to continue inroads in providing educational opportunities to underrepresented groups, including its fully funded annual Richmond’s Promise to Virginia scholarships. Those are offered to Virginians who demonstrate financial need.

On the personal side, Crutcher says being a university president may be considered a status symbol to some, signaling responsibility and some influence. But it should also be couched in perspective by those who have such a job, he adds.

“Being president is not who I am,” says Crutcher, explaining how he’s balanced his job with reality. “It’s a position I am honored to fill. I know the difference.”

It did not take Dr. Maria Thompson, 54, much time to grasp the magnitude of the challenges she would face as the new president of Baltimore’s Coppin State University. With the average age of its 3,000 students being 28 and simply completing college being an essential part of many students’ agendas, her plan for helping students is different from many of her peers.

The Nashville native earned a bachelor’s degree in textiles and apparel from Tennessee State University and a Ph.D. in textile science and textile economics from The University of Tennessee.

“We’re a very strong institution when it comes to community engagement,” says Thompson, who says she’s working hard to make sure Coppin is able to serve as a “cradle-to-career university.”

From the university’s new child care center that accepts children at 6 weeks old to the “Bridge EdU” program that partners with Baltimore City high schools, Thompson says her “top priority” is to make sure enrollment is as strong as possible, “working with my team to control the internal factors, data, fine-tuning the marketing, scholarships and partnerships.”

“It’s a target-rich region for serving working adults,” Thompson says, noting 25 percent of her students are focusing on careers in health care. “We have to think outside the box.”