Overshadowed by the presidential race has been another set of polls this campaign season. 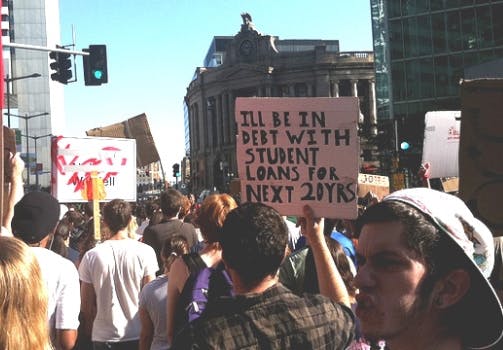 In this case, though, that’s not just how people feel about the country or the candidates. It’s what Americans increasingly think about higher education.

A series of surveys conducted or released during the primary and general election campaigns show widespread skepticism about how universities and colleges are run, how much they cost, and whether they’re worth the money.

Nearly half of people surveyed in August by Public Agenda, for example, said a higher education is no longer necessarily a good investment, because so many students go so far into debt to get one.

That’s about the same proportion of university and college graduates who are less than certain their degrees were worth the money, according to the Gallup Purdue Index, released in February.

The escalating cost of college is why seven out of 10 respondents to that Public Agenda poll said that even applicants who are qualified to go no longer have the chance. Nearly 60 percent said colleges mainly care about the bottom line, and 44 percent that they’re wasteful and inefficient. And in a particularly ominous trend for higher-education institutions, nearly 60 percent said having a college education is no longer really necessary for a person to be successful. Eighty-six percent want colleges to provide more college counseling for students who do go.

Nor are undergraduates who have just begun their educations necessarily more optimistic. Among low-income students who got into their first-choice colleges, only half ended up enrolling in them, according to an annual survey of 141,000 freshmen nationwide released in February by the Higher Education Research Institute at the University of California, Los Angeles. A third said they could not afford their first choice, and almost 90 percent said they picked a college based on cost and not on other attributes.

Students are also less likely than in the past to go to college just to learn, the survey found. A record 60 percent said they were pursuing degrees because they want to get good jobs.

Yes, graduates said, their educations had an impact on them—but not always in good ways, the Gallup Purdue Index found. About half who borrowed to pay for college said the debt had forced them to put graduate school on hold, a third say they had delayed buying a house, and a quarter say they had postponed starting businesses.

Other polls have found the mood on campus to be equally grim.

Half of college students and others aged 18 to 29 think the nation is on the wrong track, according to a survey conducted last month by the Harvard Institute of Politics.

Eighty-five percent of people in that age range who are Black said they feel under attack, and fewer than a third of students and other 20-somethings think they will be better off financially than their parents.

A separate poll of 1,605 people between 18 and 34, and conducted in the last week of September by the Center for Information and Research on Civic Learning and Engagement at Tufts University, wound up with similar findings, though the millennials it questioned who identified themselves as Donald Trump supporters were much more dissatisfied with the direction of the country than people backing Hillary Clinton.