The colleague had chaperoned another study-abroad group while employed at another institution, prior to joining Kent State University, where Merryman is a longtime associate professor in sociology. Furthermore, the man is openly gay. 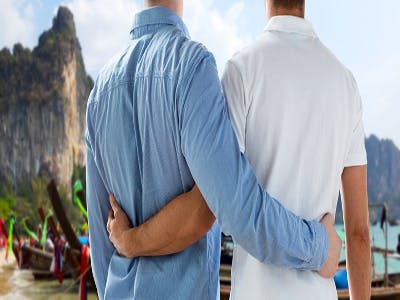 So Merryman was surprised — and appalled — every time the colleague blew off his responsibilities and left students, many of whom had never ventured outside the United States before, to fend for themselves.

“He was nowhere to be found,” she said dryly, referring to her colleague and fellow traveler.

For instance, the students relied on Merryman and another Kent State faculty chaperone for support and reassurance during airport security checks that all passengers must undergo, which included patdowns. Because the student travelers were separated into two lines, Merryman looked around for her male colleague — only to learn that once he had passed the security check, he strolled off.

Then, when they reached their sleeping quarters in Greece, the staff at the front desk issued only one key per room — even though each room was housing multiple Kent State students. When Merryman sought out her male colleague for suggestions — figuring his previous study-abroad travels included bridging different cultures — she discovered he had left the group again.

So, whenever educators organize a study-abroad group for LGBT constituents, “make sure to vet everyone carefully,” Merryman said, referring to chaperones and partnering organizations domestically and abroad. “There isn’t much literature about this subject among study-abroad programs overall, and not everyone will respect the sensitivities of LGBT students.”

Her anecdotes were shared during the weekend convening of “Expanding the Circle.” This annual meeting offers educators an opportunity to share best practices and initiatives across academic and student affairs, across various diversities and across various disciplines and LGBT subfields.

Merryman’s presentation was titled, “Lessons Learned Teaching Gender and Sexuality in Greek Culture.” She recounted aspects of the weeklong endeavor that took 15 Kent State students to Athens and the island of Lesbos to learn how and where contemporary culture emerged by examining the roles of gender and sexuality.

The travel difficulties and disappointments were partly offset by the fact that Merryman’s classes took place against one-of-a-kind backdrops: they wrote poetry on a beach, for instance, and another class session was held at the Acropolis.

“None of them felt they could safely do so without being in a group,” Merryman said of the five students.

She urged educators not to simply settle for whatever limitations their academic departments try to impose.

For instance, Merryman argued for additional chaperones until her bosses relented and let another faculty member join the group of travelers, raising the number of chaperones to three. This proved critical not only because of the male colleague’s exasperating habit of vanishing, but also because of the timing of one of their flights.

It turned out that the flight occurred the same day as the deadly terrorist bombings in Belgium, so security at airports around the world was, understandably, stepped up. Merryman and her faculty colleague each kept watch on security personnel who patted down each of their students.

As in previous years, the “Expanding the Circle” conference was held at the California Institute of Integral Studies, a stand-alone graduate school offering comparative and crosscultural studies in psychology, anthropology, community mental health, and other disciplines.

Another conference presenter described an honors course in gay and lesbian culture that he has periodically taught every four years since 1995.

Dr. Gary Luter, a University of Tampa professor of speech, theatre and dance, designed his course even though his academic degrees are in chemistry and theatre.

He juxtaposed studies of court rulings affecting gay and lesbian rights alongside guest speakers such as clinical psychologists who discussed with students the process of coming out. Many of Luter’s guest speakers have worked in the surrounding communities, so those who were active in the film and arts sectors often gave students free or discounted tickets to shows and events.

Luter said he is often moved and impressed by student motives. Once, a young, Black male in ROTC said he was taking the course in order to better understand the viewpoints and experiences of gay and lesbian soldiers whom he would eventually supervise.

During his conference presentation, Luter also traced his personal and professional journeys in coming out as a gay man.

As an 18-year-old, University of South Florida undergraduate in 1964, he was grappling with his sexual identity when he stumbled upon a letter from the dean of students to the president about a male student who had been expelled for “homosexual tendencies” the previous year. The student was allowed to return — until recurrence of “the homosexual tendencies.”

The student “understood his need for medical attention,” the dean’s letter stated, “and his re-admission has been cancelled.”

Social tolerance was still scant in 1977 when Luter began teaching at Tampa, he recounted. A colleague suggested Luter “better get a wife and bring her to the campus Christmas party.”

Luter credited an openly gay, male student with inspiring him to be more open on campus about his sexual orientation and to create the honors course. In the early 1990s, the student tried to join ROTC but was turned away, coinciding with the U.S. military’s “Don’t Ask, Don’t Tell” ban against openly LGBT individuals, which has since been repealed.

Eventually, the university created a separate ROTC program in order to accommodate the gay student, but he was the only one enrolled.

At the San Francisco conference, Luter said that gay, White men such as himself should take the lead in coming out because they don’t bear the burdens of gender and race that women and minorities do.

Dr. Ardel Thomas, chair of LGBT studies at the City College of San Francisco and who identifies as non-binary and queer, noted that “many of the boxes at my home have checkmarks.”

Thomas, who is White, has an African-American son with cerebral palsy.

Thomas suggested that new, cross-community coalitions of marginalized populations could prove helpful as the Trump presidency unfolds. For instance, LGBT individuals could form alliances with Muslims — even though, historically, some of the latter are homophobic.

Luter suggested that, as grim as the Trump presidency initially seems, “this is also an opportunity to start new courses on our campuses.”