Trump has Undocumented Students and Their Families Scrambling

By now a great majority of the country seems to have arrived at the stage of the worst political hangover any of us have ever experienced. Yet no one is feeling this hangover more so than the undocumented community. This election represents both the rise of fascism, and, literally, an existential threat to students and their families nationwide, including and especially the nearly 1 million college students that have been enrolled under the Deferred Action for Childhood Arrivals (DACA) program. 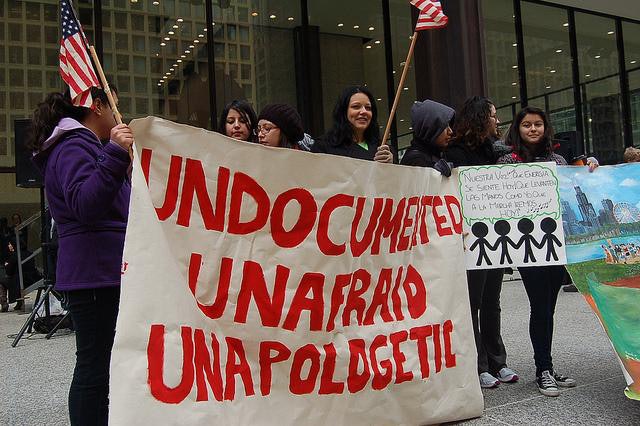 It is this program which has afforded them the opportunity to enroll in college without fear of deportation. While they and their families are scrambling, they are also fighting back and are doing so within the context that a colleague, Liliana Patricia Saldaña, an associate professor at the University of Texas at San Antonio, describes:

“The candidate who began his campaign with anti-Mexican hate, promising to deport 11 million undocumented immigrants. The candidate who has a disturbing record of sexually assaulting women and allegedly raping women. The candidate who promised to ban Muslims from entering this country. The man who mocks our disabled brothers and sisters. The candidate who is queerphobic with his support of right wing homophobic right wing extremists. And the man who hates the Black Lives Matter movement and Black people in general. This is the person who was elected president in 2016.”

Part of the political climate necessitates also challenging the mainstream narrative that the GOP nominee won handily and thus has a mandate, especially in regard to his immigration policies. It is projected that, when all the votes are counted, his opponent will have won by some 2 million votes. Donald Trump’s rise to power will have been the result the Electoral College, and not the will of the people.

Despite this, it is reassuring to hear the public pronouncements of strength and of courage among the leadership of the undocumented community. There indeed is resistance, and yet, at minimum, there is chaos, because every single person in this category is theoretically at risk, just like in the current administration, in which the priority was supposed to have been violent criminals. Instead, people who simply have come into the country to work, sometimes more than once, are considered felons. The web of who is considered a criminal has been greatly expanded by the current administration and that web can be expected to be cast even wider by the new administration.

While the current administration has deported close to 3 million people in 8 years, the GOP nominee campaigned on the promise to deport 11 million within 18 months with a special deportation force. He now says he will target 3 million criminals immediately. On top of that, he continues to insist on building a 2,000-mile wall, plus he also promises to expand the border patrol threefold. He also has promised to dismantle DACA upon being sworn in. This in large part is the reason for what can at best be described as “uncertainty.”

The specter of immigration raids conjures up Nazi Germany, of going door-to-door, including at schools, colleges and universities. This has also sparked a nationwide movement to create sanctuary colleges and universities as no-go areas for immigration and police authorities. This is but the beginning of many other resistance movements, which also includes calling upon faculty and administrations to provide both haven and continuing support for DACA students.

Part of the precautions is not due to an imagined threat, but rather, this country has a well-documented history of conducting massive immigration deportation campaigns going back to the first two decades of the 20th century, including the repatriation campaigns of the 1930s and Operation Wetback in the 1950s. This has also included massive dragnet raids in the 1970s and 1980s at schools, communities and workplaces, particularly in barrios nationwide. This has also included a rash of repressive anti-immigrant legislation during the past decade — with much the same anti-immigrant activity centered in Arizona, such as SB 1070 — that has been copied nationwide.

What other signals has the president-elect sent out? He is considering bringing on board to his administration Kris Kobach, the architect of SB 1070, former Arizona Gov. Jan Brewer and Maricopa Sheriff Joe Arpaio, all three of whom, over the past decade, have exhibited the worst anti-immigrant sentiments in this country. Those are his signals.

On top of the very real fear of vigilante violence, hate crimes, and racial profiling by people of color in general, undocumented students, both DACA and non-DACA, face the reality of a return to the days of living in the shadows. The best advice, as given by Lizbeth Mateo, a recent Santa Clara University Law School graduate, is to retain the services of an attorney. Though she also reassures that they will not be battling in this struggle alone.

Dr. Roberto Rodriguez is an associate professor in Mexican American studies at the University of Arizona. For further information on this topic, please go to: https://mydocumentedlife.org/2016/11/13/post-election-recommendations-for-school-administrators-educators-counselors-and-undocumented-students/.