The shock of the presidential election results is still sinking in across America, for both Trump supporters and anti-Trump voters. The thing that seemed outlandish and completely impossible just a year ago has now become the reality for Americans. The truth remains, however, that come January 20 the nation’s highest office will be helmed by Republican Donald Trump. 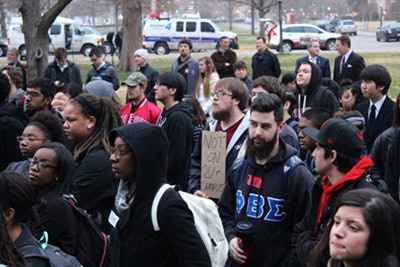 Based on his campaign rhetoric there is a lot of understandable fear regarding the state of diversity in the nation and what it all means for marginalized groups like minorities, LGBTQ+ individuals, and even women. What happens in the next four years remains to be seen, but colleges, our nation’s hotbeds for diversity progress, can take some actions to ensure that they are just as inclusive and progressive in four years as they are today.

Here’s how to keep college and university campuses moving forward for diversity in a Trump-led America:

Trump’s platform rose to popularity on issues like illegal immigration, tax-funded health insurance, and abortion rights. Facilitate conversations at the college-wide level about these issues, looking at the best outcomes for a more diverse America while truly examining the opposing views. This can take place in classrooms but should also happen at a college-wide level at forums or other university-hosted events. Don’t just dismiss xenophobia or White privilege as “bad” — talk about why people put their faith in those things and how to turn the tide from fear to understanding. Allow students to learn from each other in an organic way that doesn’t hand down a black-or-white decree on the issues. Colleges must lead the discussions on these issues so the next generation of educated graduates has a broader world view and deeper awareness.

Under the Obama administration, plans for two years of free community college for all students who maintained the right course load and grade-point average were under way. It’s reasonable to assume that Hillary Clinton would have furthered that plan and also reasonable to assume that Trump will not. Things like Pell grants and federally-funded aid are likely to tank or, at the very least, remain stagnant. Colleges and universities that want to keep increasing the diversity on their campuses must put actionable plans in place to make that happen. This includes more private scholarships, along with more reasonable costs for students and spending plans for attendance. Early high school recruiting will become more important than ever so colleges and universities can target a diverse population and get those students prepped for college costs and financial aid programs.

One of Vice President-elect Mike Pence’s claimed successes in his home state of Indiana was a fiscally stronger state (at least on paper). The reality of that was cuts to education, specifically public education, and the juvenile criminal justice system (among other areas). Public colleges and universities should expect to see less funding across the board in an attempt to “repair” national spending. Private colleges could feel the sting as well when it comes to federal funds for student aid and other eligible campus spending. Every college campus has different needs, but thinking ahead, right now, about ways to salvage diversity programs and support programs for disadvantaged students is vital to keeping those services afloat and thriving. How can your school continue to support the students that need diversity programs the most?

Most colleges and universities already have a robust alumni giving program in place, but the urgency now for outside funds is greater than it was before this election. If there are programs that will see funding cuts, let alumni know the specifics. Share information about what funding is going down and how they can help boost it back up. If graduates know about the specific need, they are more likely to give. Alumni who appreciate what a diverse campus and student support services did in their own lives will be more likely to give if they know a program is going to be cut or eliminated completely. Alumni are usually passionate about the place they earned their higher education and will help to keep it successful if they can.

Fear is understandable — but preparation is smart. Trying to control what we can right now when it comes to protecting diversity on college campuses can make the difference in what we see regarding it when these four years are up.