President Cauce Continues to Break Down Barriers to Diversity

“I hope that 10 years from now, when people close their eyes and they think about a university president, it will be a broader array of folks and that I’ll have had a part to do with that,” says Cauce, president at the University of Washington.

For the past three decades, Cauce has called the University of Washington home. 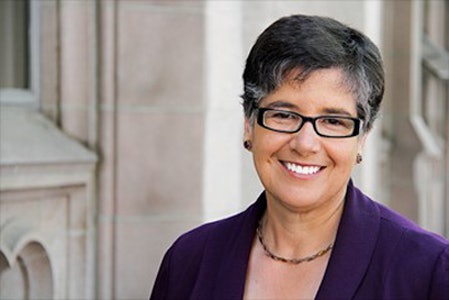 And during this time, she’s dedicated countless hours to mentoring students through higher learning because, as her father told her, “Education is the only thing that nobody can ever take away from you.”

Growing up in Miami, school had always been “a bit of a refuge — I really loved reading and being in school, and it was always a place where I felt very comfortable.”

As an undergraduate at the University of Miami, Cauce gravitated to psychology through an introductory course in which she had an “absolutely terrific instructor.” A couple of psych classes later, she ended up majoring in psychology as well as English.

In 1977, Cauce graduated a year ahead of schedule — “partly because I was anxious to get on to the next stage,” she says.

For the next seven years, Cauce furthered her education at Yale University. “It was both wonderful and a bit of a culture shock,” she recalls.

Cauce leaned on her professors; in particular, a Black instructor named Edmund Gordon. He “came up during a time that was about as difficult in this country in terms of race, etc., then one can possibly imagine,” Cauce explains.

As her mentor and dissertation adviser, “He really taught me to look for the best in people … and to not let what other people think hold you back.”

It’s because of Gordon, in addition to other mentors throughout her collegiate years, that Cauce is committed to supporting minority students through research, creating opportunities for access, and providing guidance far beyond the classroom.

What she loves most about the classroom are the discussions “when you find students actually teaching each other because they come to particular issues from different perspectives,” she says. But quite frankly, she adds, “I probably enjoy my connection with students outside of the classroom every bit as much.”

Over a little more than a decade, Cauce climbed the ranks in administration, becoming director of clinical training in the university’s psychology department, chair of the Department of American Ethnic Studies, and executive vice provost and dean of the College of Arts and Sciences, among other appointments.

In 2011, she became provost and executive vice president. In this position, she launched a committee where students became involved in important university decisions. “I really think that kind of empowerment of students, and faculty as well, [is a] very powerful way of actually getting things done. I hope that collaborative style is also something that will make a difference and live beyond me,” she says.

Cauce was appointed president in 2015 — the first woman to permanently hold that position.

“In some ways it kind of feels like it’s about time,” she says. “But there’s something kind of cool about breaking down barriers and so that was very nice.”

The achievement is personal as well.

“I can say with probably a great deal of certainty that I would never be a president at another university,” she says. “I care very deeply about this university — this university is my home.” And as an emigrant from Cuba, “I know what home means and home is very important to me.”

Cauce has made innovation through health initiatives a priority at the research university. In May 2016, the school launched its Population Health Initiative, a 25-year vision designed to address human health, sustainability, and social and economic equity. “For us, it’s about trying to create an environment where people are more apt to look at things in different ways,” Cauce says.

In October, the Bill & Melinda Gates Foundation awarded a $210 million gift to the initiative, which will go toward construction of a new building on campus.

Cauce also has made equity an administrative priority by hosting a series of conversations and events around race relations and “trying to get past some of the unconscious bias that goes into hiring.”

While there’s still lots of work to do, the efforts have already positively impacted enrollment, she says, pointing out that this year’s freshman class is the most diverse in the school’s history.

In cultivating her own legacy, Cauce says that, at day’s end, “it’s really about the students” — a fair number of whom now have careers in higher education, and others who are doing “fabulous things in research that come from ideas that may have started while they were students here. They’re doing much better than I ever would.”