ATLANTA — Chalk graffiti supporting Donald Trump for president started to appear on stone stairways and wooden benches at the Emory University campus just around the time the school’s admissions office was preparing to send acceptance letters to successful applicants for this fall’s freshman class.

Among those potential new students, according to a university official, were several dozen undocumented immigrants with temporary residency status that exempts them from deportation under the Obama administration’s Deferred Action for Childhood Arrivals program, or DACA. 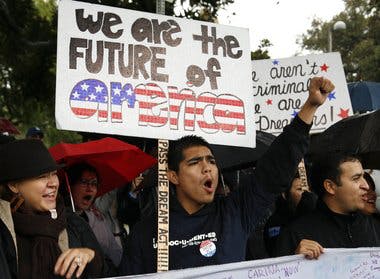 Six wound up enrolling at Emory, and the school began to publicize its new welcoming policy — including financial aid for students with DACA status — undocumented students aren’t eligible for federal loans or grants — and services to help them graduate.

Emory is among a small but growing number of private universities and colleges that have joined many public ones in accepting DACA and other undocumented students, in part because more private donors are providing scholarships for them. There’s even a new project by a group of philanthropists to give undocumented students private loans to be repaid as a percentage of their future incomes. And young DACA recipients themselves, using apps and websites, have created digital networks of information about which schools will take them, what sources of money are available and more.

Yet now, almost as abruptly as they began, these developments among schools, donors and students are threatened by the tightened immigration policies promised during the campaign by President-elect Donald Trump — including the possible reversal of President Barack Obama’s 2012 executive order establishing DACA in the first place.

Emory and other universities and colleges, some of which announced new policies on undocumented students only in the last few months, are now noisy with marches, protests and petitions demanding that these policies survive the Trump administration and that campuses be turned into “sanctuaries” for undocumented students.

More than 440 college and university presidents and chancellors, including Emory President Claire Sterk, recently signed a letter asking President-elect Trump to extend the DACA program. University and college leaders in California separately appealed to Mr. Trump to let undocumented students continue their educations without living in fear of being deported.

But the new administration will doubtless also be under pressure from its supporters and others who believe that the college students among the 740,000-plus people approved for DACA status to date, and the estimated 65,000 undocumented who graduate high school each year, do not deserve institutional financial aid or other support that, they say, could be given to American citizens.

“We are not in favor of paying illegal aliens to stay in this country,” said David North, a fellow at the Center for Immigration Studies, a nonprofit organization that favors restricting immigration. “We don’t advocate scholarships for DACA students either,” he said, adding that, under Trump, “I’m expecting DACA not to expand; or to pass out of existence.”

Many schools arrived at these new policies in response to pressure from student activists on and off campus and to the lack of movement in Congress on immigration reform. The schools say that helping undocumented students fits with their missions of expanding access to higher education. But some colleges and universities — in need of enrollment at a time when the number of high school graduates is relatively flat — are also responding to donors willing to give them money to pay for undocumented students.

“Private schools are tuition-driven,” said Susana Muñoz, an assistant professor of higher education at Colorado State University. “If they have donors or investors, it’s giving them a reason to care, because it’s financially viable for both the institution and the students.”

After surviving the recession, universities and colleges began “focusing on ‘What do I do next? How do I attract more students? There’s this whole pool of potential students, but they’re different from traditional students. How do I attract them?’” said Casey Jennings, a founder of 13th Avenue Funding, a Sacramento, California-based nonprofit that offers income-share agreements — essentially investments in students that are repaid from the students’ postgraduate earnings.

Jennings and his partners launched a pilot project in 2012 with 11 low-income students. It gave them loans of up to $15,000, repayable after graduation at up to 5 percent interest, over as many as 15 years, but only if the graduates earn more than $18,000 per year. The program’s proceeds will be reinvested in successive generations of students.

The organization now plans to focus on undocumented students. The goal, said Jennings: “We need a better-educated populace as a society.”

Even with outside funding, however, most private colleges are spending money from their own budgets on financial aid for undocumented students. That increasingly puts them at the center of a controversy that is escalating to such a degree that one college spokesperson at first declined to talk about the issue.

“The president-elect’s stated intentions regarding undocumented persons is causing some turmoil on many campuses and we are in the process of fact-finding regarding our options,” that spokesperson wrote in an email.

Some of the universities and colleges accepting DACA students, like Williams College, are treading cautiously. Its director of media relations, Mary Dettloff, said the school is consulting immigration law experts and “probably has more questions than answers.”

Williams will “do all we can to protect and support our undocumented students,” its president, Adam Falk, wrote in a statement to students, faculty and staff. But he expressed concerns about turning the school into a target for federal immigration enforcement by declaring itself a “sanctuary.” If the federal government seeks to enter campuses across the nation, Falk wrote, “private colleges and universities do not have the ability to offer such absolute protection, and it would be a disservice to our students to promise what we can’t actually provide.”

“They’re scared to death of what might happen,” he said. “They don’t want the federal government showing up at their door.”

According to DREAMer’s RoadMap founder Sarahi Espinoza Salamanca, who was undocumented when she began her college education and is now a permanent resident, DREAMer’s — with its database of 145 scholarships for which DACA students are eligible — surpassed her goal of 10,000 downloads for its first year in just seven months. Jin Park, founder of Higher Dreams and a junior at Harvard who has DACA status, said his website is receiving “several thousand” visits per week. And, according to founder Carolina Valdivia, My (Un)documented Life, launched in 2011, shot from 100,000 page views to more than 500,000 in the year leading up to the election; since then, it’s gotten 650,000-plus.

Valdivia said that undocumented students are now asking her, “How do I protect myself?” and “How can schools help?” Espinoza Salamanca said her email is “blowing up” with similar queries. She thinks that threats to undocumented immigrants will result in “more people willing to help.”

“Private donors, foundations and schools will be more likely to support undocumented students,” she said. “They know the value of these students.”

This story was produced by The Hechinger Report, a nonprofit, independent news organization focused on inequality and innovation in education.