In a move highlighting the uncertainty surrounding the future of undocumented students on college campuses across the country, Harvard University President Drew Gilpin Faust said on Tuesday afternoon that the institution would not be designated a sanctuary campus. 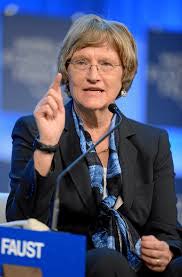 The term sanctuary campus has no precise legal definition but echoes the policies of “sanctuary cities” like San Francisco and New York City. Sanctuary cities are cities that have adopted policies designed to protect undocumented immigrants by forbidding police and municipal employees to inquire about immigration status, not allocating municipal funds to enforce national immigration laws, and other measures.

According to the Harvard Crimson, Faust said that designating Harvard as a sanctuary campus might only serve to put undocumented students at greater risk.

“It also risks drawing special attention to the students in ways that could put their status in greater jeopardy,” she said at a Faculty of Arts and Sciences meeting. “I believe it would endanger, rather than protect, our students, and that is not something I am willing for this institution to do.”

More than 500 university presidents, including Faust, have signed a statement pledging support to the Deferred Action for Childhood Arrivals (DACA) program and undocumented students on campus. The statement is being circulated by Pomona College.

DACA allows certain undocumented immigrants who arrived in the U.S. as minors to apply for a two-year program that defers deportation, provides eligibility for a work permit, and allows them to attend universities and colleges. In some states, DACA students are also eligible for in-state tuition at public universities and colleges. The program does not provide a path to citizenship.

Princeton President Christopher Eisgruber, who also signed the Pomona petition, reiterated in a statement to the Princeton community last week the lack of legal basis for making Princeton a sanctuary campus. “Immigration lawyers with whom we have consulted have told us that this concept has no basis in law, and that colleges and universities have no authority to exempt any part of their campuses from the nation’s immigration laws,” he wrote.

Yet university leaders are facing pressure from students and professors to call themselves “sanctuary campuses.” Fearing a threat to their undocumented peers once President-elect Donald Trump is in office, students at hundreds of schools, including Harvard, have enacted protests and walkouts demanding their institutions commit to protecting undocumented students and students participating in DACA.

During his campaign, Trump vowed to end sanctuary cities and expel undocumented immigrants from the country. He also vowed to end DACA on his first day in office.

In his recent TIME Person of the Year interview, Trump indicated that he had reversed his thinking on DACA. “I want Dreamers for our children also,” Trump said. “We’re going to work something out. On a humanitarian basis, it’s a very tough situation. We’re going to work something out that’s going to make people happy and proud. But that’s a very tough situation.”

“DACAmented” individuals are sometimes referred to as DREAMers, a reference to the 2010 DREAM Act (Development, Relief and Education for Alien Minors), which failed to pass in the House of Representatives. DACA is a modified and later version of that original vision.

Referring to DACA students, Trump told TIME, “They got brought here at a very young age, they’ve worked here, they’ve gone to school here. Some were good students. Some have wonderful jobs. And they’re in never-never land because they don’t know what’s going to happen.”