For nearly two decades, putting students of color in Los Angeles on a path to medical and health professions has taken a village—a legion of teachers, tutors and mentors as well as deep-pocketed donors and parents eager to propel their children further in life than they’ve ever been.

It has also taken the devotion of an individual who’s determined to immerse Black and Hispanic students in STEM and the belief that “they can do anything.” 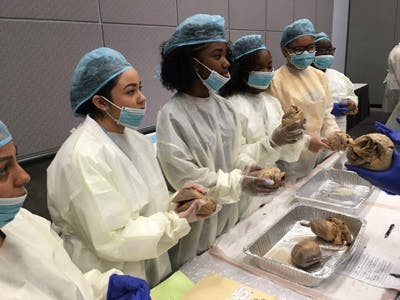 Since spearheading the Saturday Science Academy II in 2000, this has been her way of expanding her students’ world and equipping them for a journey that could lead to medical school and beyond. But these days, Lorraine Grey, director of the Saturday Science Academy II (SSAII), based at the historically Black Charles R. Drew University of Medicine and Science in Los Angeles, talks almost as much about being “ready to retire and pass the baton” as she does about ensuring that her students of color, no matter how young, know that a career in medicine is possible.

Nearly 20 years ago, when Grey, a former nurse, was tapped to run SSAII, it wasn’t long before this urgent call went out to the nation’s medical schools: they need to “bridge the appalling diversity gap that separates medicine from the society it professes to serve.”

It wasn’t just a call for equal access to the profession—it was a call to improve public health. Studies were clearly showing that diversity among physicians meant better health for patients of color, better access for the poor and underserved, and more.

But even as the long-running SSAII thrives and newer pipeline programs such as MedAchieve at Touro College of Osteopathic Medicine spring up to help move the needle on diversity in the physician pipeline, U.S. medical school classes are only slightly more racially and ethnically diverse than they were in 1997, according to new findings from a team of University of Michigan Medical School researchers who have studied these issues.

At about 12 percent, Black, Native American and Hispanic students are underrepresented in the nation’s medical schools. But long before they apply for medical school admissions, most face a steep climb, says Grey.

That’s because students of color disproportionately attend low-performing elementary and secondary schools, and few are directed into college prep and science, technology, engineering, and math (STEM) courses that would prepare them for pre-med studies. Maybe worse yet, Grey adds, many don’t know that medical school or being a physician is an option for them.

Starting from the bottom

Focus further up the so-called pipeline “on the very youngest college students who have an eye on medical school or another health-related graduate program” in terms of intervention, write the University of Michigan researchers in a new article in Academic Medicine. Based on evidence from other studies and from their own evaluation of a University of Michigan pre-med program, the researchers also conclude that the support and training a student receives in their earliest years of pre-med studies can factor into them pursuing medical school or other graduate health sciences.

“We will be able to improve diversity in medicine only if we are able to create and sustain these links,” said Dr. Adrianne Haggins, a co-author of the study.

In Drew’s Saturday Science Academy, organizers reach down far to fill that same pipeline with students of color. Capturing future physicians of color means sowing seeds as early as pre-kindergarten. Those early years provide a critical window of opportunity to dispel myths, suggests Grey, like the STEM fields “are too boring, too hard, or inaccessible to African-American and Latino youth.”

Each Saturday morning, cars like caravans pull up on campus and unload eager students dressed in their uniforms—bright yellow T-shirts bearing the Academy’s name.

Rasheed Ivey came kicking and screaming to the Academy. At age 9, he wanted to stay home and watch Saturday morning cartoons, not study science. But when he got the opportunity to dissect a pig, Ivey was all in.

He stayed in SSAII through high school. Today, Ivey is a third-year Charles Drew medical student and an Academy mentor. He’s one of many reminders Grey has that the popular pipeline program is making a difference to students and families in the community. There are currently 150 students in the program.

There is always a waiting list, Grey says. The Academy’s Junior White Coat ceremony is the culmination of the students’ hard work. When they complete the program, students receive certificates, badges, and crisp white coats, the universal symbol of the medical profession.

“We offer a rigorous program, but most of our kids don’t know they are learning. They are just having fun doing it,” Grey says.

Jordan McDonald was a freshman at A. Philip Randolph Campus High School in Harlem, New York, when he jumped at the chance to learn about medicine through the Touro College of Osteopathic Medicine’s MedAchieve. Participation in the two-year pipeline and mentoring program made the difference for McDonald, who was first inspired to pursue medicine by his family doctor and his mother, who works as a nurse.

Turning on that switch and helping deposit other students of color into the pipeline is the hope of Harlem’s Touro College, says Amber Pinson, the program’s co-director. Started four years ago, the once-a-week, after-school MedAchieve begins courting African-American and other high school students of color in ninth grade. First- and second-year Touro medical students are paired with high school students, serving as their teachers, mentors and guides. For those who complete MedAchieve and maintain at least a 3.0 average through their college years, Touro guarantees them an interview for the school’s osteopathic medical degree program.

McDonald, an “A” student, is now a high school senior. What concerns him now, McDonald says, is not whether he will get into his top college picks, but whether he can successfully make the leap from high school to college and then on to medical school. Those watching the diversity numbers want to see more young Black men like McDonald in the medical school pipeline.

But despite efforts by medical schools and professional organizations to increase racial and ethnic diversity among this demographic, the numbers for Black men applying to study medicine have remained stagnant for nearly four decades, according to an Association of American Medical Colleges (AAMC) report released in 2015 at the National Medical Association (NMA) Convention.

McDonald is determined to defy the odds and make it to medical school. By the time he completed MedAchieve, McDonald knew that he wanted a career as a neurosurgeon. What is yet to be discovered about the brain, he says, is what intrigues him most.

Meanwhile, the AAMC plans to partner with the NMA, the Black medical association, to launch a task force that will suggest new solutions to diversifying the medical school pipeline and charting the course of Black men in medicine.