Students at historically Black colleges and universities are saddled with debt and are borrowing twice as much in federal loans as their peers who are enrolled in non-HBCUs, according to a new report issued by the United Negro College Fund. 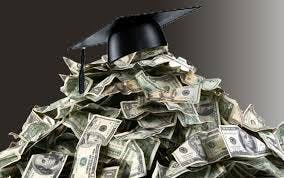 The findings outlined in “Fewer Resources, More Debt: Loan Debt Burdens Students at Historically Black Colleges and Universities,” reveal that the percentage of HBCU graduates who borrow large amounts ($40,000 or more) of federal loans to finance their degrees is four times that of non-HBCU graduates. Many of these same students, not only borrow federal subsidized loans, but also borrow the more costly federally unsubsidized loans and Parent PLUS Loans.

“There has been a lot of conversation in recent years about the financing of a college education,” said Dr. Brian Bridges, vice president of research and member engagement and the executive director of UNCF’s Frederick D. Patterson Research Institute. “We want more students to gain access to get to college and to get through college.”

Bridges said that the purpose of the report was to learn more about the borrowing habits of students who attend HBCUs and to develop sound policies to assist this demographic.

While the costs associated with attending a public or private HBCU is about 30 percent less than other four year institutions, HBCU students on average, borrow about $26,000 in federal loans compared to the $15,000 that non-HBCU students borrow.

Cheryl L. Smith, Senior Vice President for Public Policy and Government affairs at UNCF said that there is much that the federal government can due to reduce loan debt, such as revamping the FAFSA form, which determines financial aid eligibility.

Because of the complex nature of the FAFSA, many students don’t complete the form accurately, “leaving PELL Grants on the table,” Smith said. She said that the federal government currently has a “convoluted loan repayment” system and said that there needs to be an “effective, manageable and simple repayment process,” to ensure that students don’t default.

“UNCF-member institutions have devoted tremendous time, resources and effort to reduce student loan defaults, all while using scare funds to do their part, and these efforts are paying off,” Lomax said. “Now, federal policymakers must step up to the plate to provide debt relief and better student loan services to the 80 percent of HBCU students who must borrow to get to and through college.”