College and university enrollment fell during the semester just coming to an end, marking a fifth straight year of decline.

Students over 24 represented the bulk of the dropoff, with for-profit institutions suffering the most, the figures, from the National Student Clearinghouse Research Center, show. 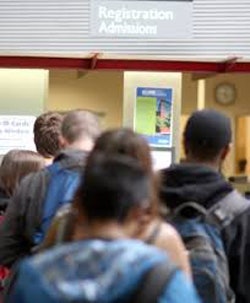 The trend threatens the national goal—already behind schedule—of increasing the proportion of the population with degrees. It also signals further problems for not only for-profit colleges and universities, but private nonprofit ones for which tuition is the principal source of revenue.

“These forces show no sign of slowing and will continue to challenge institutions in their planning,” said Doug Shapiro, the center’s executive research director.

Enrollment in all of higher education was down 1.4 percent from the previous fall. For-profit institutions saw a nearly 15 percent decline and community colleges 2.6 percent.

For-profits in particular have been affected by a slide in the number of students over 24, who now make up 40 percent of undergraduate and graduate enrollment.

Rather than expanding services for older students, many colleges and universities have been cutting back.

After rising slightly in the spring, enrollment at private nonprofit universities and colleges fell by just under a percentage point. At public four-year universities, it eked up by two-tenths of a percent.

That means a collective 270,000 fewer students were in college this semester than at the same time last year.

The news follows predictions that the number of high school graduates will decline for at least the next two decades, while the proportion of those grads who are lower-income and nonwhite will increase.

That means higher-education institutions will need to find new ways of educating a student body with less preparation and fewer financial resources.

The biggest declines in enrollment were in the Northeast and Midwest, the National Student Clearinghouse report said.