When 19-year-old Jesus Valdez reflects on how he got from Boyle Heights, one of the poorest areas of Los Angeles, to the University of California, Merced, a small but growing college surrounded by farmlands just north of Fresno, California — College Track is one of the first things that comes to mind.

The California-based nonprofit — which got its start in 1997 in East Palo Alto — provides college advising, academic and financial support to first-generation college students such as Valdez over a period of 10 years, starting the summer before ninth grade and continuing through college. 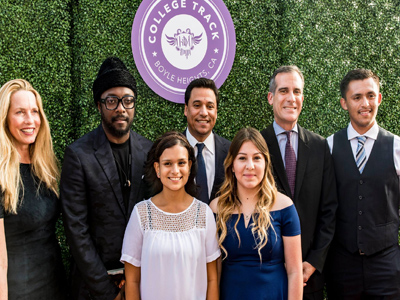 Among the many organizations that provide such services for first-generation and low-income students, College Track stands out because of the amount of time the organization invests, said Bill DeBaun, director of data and evaluation at the National College Access Network, a Washington, D.C.-based advocacy group.

“The 10-year commitment they make to students fosters deep, meaningful relationships that students can rely on through the duration of the completion pipeline,” DeBaun told Diverse.

Valdez — whose mother packages fake jewelry for minimum wage and whose father is a welder — is a living testament to that.

Nor would Valdez have secured as much scholarship money as he did to offset the cost of college, which at UC Merced can be close to $36,000 for students who live on campus.

“They’re always emphasizing the idea that you have to apply for scholarships to pay for college,” Valdez said of workers at College Track in Boyle Heights, where he attended the Roosevelt High School Math, Science and Technology Magnet school.

Valdez heeded the advice and, among other scholarships, won one of the newly established i.am ESRI Scholarships — a renewable scholarship that he said provides $4,000 over two semesters — and a Kayne Scholarship, which a program official said provides “critical programming for persistence and career development all the way to college graduation, as well as financial support and assistance with loan repayment.”

Valdez was also able to tap into the merit-based scholarship money that College Track sets aside to help students meet whatever costs their scholarships and financial aid do not.

Students can earn up to $5,600 in merit-based scholarship by meeting various program expectations. Valdez said he used his scholarship to pay for books and the like.

“I haven’t paid anything out of my pocket mainly because of the scholarships and College Track,” Valdez said.

That would be will.i.am — the Grammy Award-winning entertainer, philanthropist and technology enthusiast born as William Adams.

While will.i.am got bussed out of Boyle Heights as a youth to attend John Marshall High School in a more affluent area of Los Angeles, his heart never left his neighborhood, said Saskia Pallais, the regional Los Angeles executive director at College Track.

Which is why, she said, when will.i.am first learned about College Track several years ago and “fell in love with it,” he urged the organization’s board to set up shop in Boyle Heights.

“He believes strongly that we should be doing what we can to lift the schools in communities like Boyle Heights and other communities around the country,” Pallais said. “He realizes that it was the fact that he was bussed out of his community that he was able to get the kind of education that he got.”

Will.i.am also put his money where his mouth was — $1 million of it, to be precise — to support the work of College Track over four years, according to Pallais. That was five years ago. Since then, he has increased his financial commitment and — effective as of November — became a board member as well, Pallais said.

“In total he has committed to 10 years of support and is one of our main financial sponsors,” Pallais said.

Back in September, will.i.am — founder and frontman for the Black Eyed Peas — announced that proceeds from a remake of a Peas song — #WHERESTHELOVE — would go to benefit his i.am.angel Foundation, a nonprofit that provides support to College Track.

Efforts to determine how much money the song has generated for College Track were not successful.

Officials at College Track do not pretend the work they do is easy.

In press materials, the i.am.angel foundation stated that College Track in Boyle Heights was sending its “entire class of 2016” — 45 students — off to college.

Technically, that may be true. But the reality is there was some attrition along the way. The 45 figure represents about 79 percent of the 57 students who started out with College Track as high school freshmen.

Pallais said most of the students from the original cohort who left the program did so because “they feel like they can’t commit to the program.” A few had to be dismissed — but program officials say dismissal decisions aren’t made lightly.

“We don’t dismiss after one semester because they’re young. These are high school students who are going through a lot,” said Tina Kim, site director at Boyle Heights College Track.

“So they get time to make choices but the flipside is they’re nearing adulthood and they’re responsible for what they do at the end of the day.”

The commitments required of students are not easy, either.

“Kids have to spend about three to five hours a week with us,” Pallais said. “What we tell them is we expect them to maintain a 3.0 GPA.”

Those who fall below a 3.0 are given case management and one-on-one tutoring.

The most important thing is that the students “work hard to get themselves to a place where they’re going to be college eligible and actually take advantage of the resources we have around them,” Pallais said.

For those who stick with the program, they have access to a facility about a half mile from Roosevelt High School.

“Our physical space is an important part of our model,” Pallais said. “We want kids to leave school and enter into something that is a new space, a different space.

“It’s very apparent that college is the theme of the day when you walk in.”

The space provides access to technology, a quiet place to work, and a “culture that encourages working toward a goal of college,” Pallais said.

Part of that culture involves hitting a gong to announce whenever a student completes a task, such as submitting a college application, and posting a picture of the student on Instagram.

“There’s a lot of celebration that happens to recognize the milestones that students have met in this area,” Pallais said.

The students must craft “dream statements.” A sampling shows their dreams range from “attend an Ivy League college” to “travel abroad and study a variety of languages and cultures.” Career aspirations range from aerospace engineer to president.

“We help them connect their dreams and passion with service work they do so that it becomes more meaningful and it’s not like I just go to the soup kitchen to scratch out hours, but because I’m passionate about homelessness,” Pallais said.

The college advising is also connected to the students’ dreams.

“We ask: ‘What does this mean for you in college?’” Pallais said. “What kind of field can you explore or are their colleges that align to your dreams?”

The college advising fills a crucial void in California, where the ratio of students to counselors is as high as 812 to 1.

“The college advising is something they don’t get at their high schools and if they do get it, especially schools that are in underresourced communities, they focus their attention primarily on seniors,” Pallais said. “Our kids are getting exposed to college advising as early as the ninth grade.”

Seniors apply to UC and Cal State schools. All students apply to at least six colleges. Valdez says he applied to 11 or 12 colleges.

Valdez said his college adviser at College Track advised students to look at what college would be best for their current circumstances, but also encouraged students to apply out of state to “get out of the comfort zone.”

“I think that is something they don’t really get at their high schools is that very deep, one-on-one from staff and counselors around the application process,” Pallais said.

At College Track in Boyle Heights, activities include several “lock-ins” — special days on which students work strictly on college applications or filling out financial aid forms or scholarship applications.

“We believe, based on the research, what we’ve found is that first-generation, minority students are going to be more successful in gaining a college degree if they go into a four-year right away,” Pallais said. “When they go to community colleges, very often they don’t transition out.”

College Track also provides ACT test prep to help the students improve their college exam scores, assistance with financial aid forms, and advising that stresses — among other things — the need for students to do well on their “A to G” courses so that they get a high GPA on the courses that count in the University of California system.

For the 45 students from the original Boyle Heights cohort who stuck with the program, the results thus far have been impressive. To wit, figures provided by College Track in Los Angeles show:

• 93 percent were admitted to a four-year university

“But we know that getting them in is just one of many challenges that will be before them,” Pallais said. “Our ultimate goal is college completion.”

Valdez — who is leaning toward a major in mechanical engineering — said he feels good about his decision to come to UC Merced.

“I wanted to come to this school because I wanted to be part of this growing community,” Valdez said of UC Merced. “It’s getting more recognized. They’re expanding the school. Like right now they have this 2020 Project to be one of the top research schools in the country,” Valdez explained.

Valdez is also working on a goal of his own.

“Right now it’s just getting through college and focusing on doing well,” he said.