When 9-year-old Miles — a fourth-grader at Southwest Baltimore Charter School — visits his after-school tutor at Johns Hopkins University, he always asks what kind of math his tutor does in college.

“He thinks I do some higher level math. He’s attracted to the math that I’m doing,” explained Miles’ tutor, Soumy Haidara, a sophomore and public health major at Hopkins. 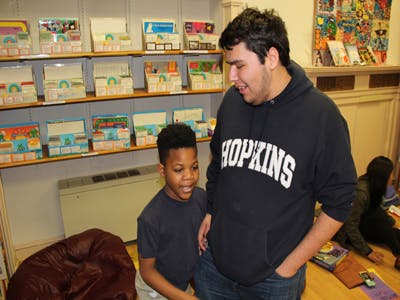 Similar interactions are a regular occurrence at the Johns Hopkins Tutorial Project, a longstanding after-school tutoring program in which elementary school students get one-on-one help in reading and math from Hopkins students who volunteer.

While there is no formal evaluation of the tutorial program, which currently serves about 63 first- through fifth-graders from three nearby elementary schools by pairing them with Hopkins students who volunteer, anecdotes — coupled with some of the more favorable research on the impacts of tutoring — suggest that the program is well positioned to have a positive effect on the students it serves each year.

Program officials say they tutor the schoolchildren because it’s the right thing to do, not to necessarily help the students score a certain amount of extra points on standardized tests.

“We don’t look at tutorial like a research thing,” said Young Song, director of the Tutorial Project.

The Tutorial Project — which takes place in a classroom and a colorful, mural-painted room on the second floor of Levering Hall — originated in 1958 out of the chaplain’s office in an effort to get Hopkins students off campus and into the community.

Over the years, the program evolved, and now — instead of Hopkins students going out into the community — the idea is to bring young Baltimore school students onto campus.

The benefits of that approach are not lost on tutors such as Haidara, a native of Bamako, Mali, who grew up in the United States and who says he wishes he had someone to tell him more about college back when he was in elementary school.

“The benefit of that is you start getting them thinking about college and that’s the amazing thing,” Haidara said. “Miles always asks me about how my college life is and all this and that.”

Miles found it curious when Haidara explained what it means to live in the dorms.

“He always asks me like, ‘I sleep at the school? That’s so weird.’” Haidara said. “They see the world a lot differently.”

Miles, whose personal goal in the program is to learn to add and subtract fractions with different denominators, says of the tutoring program: “It’s a good idea to come here because you learn more.”

He emerged from a test at the tutoring center the other day with a smile on his face. “It was too easy,” he said of the test, crediting Haidara with helping him learn the concepts on which he was tested.

Miles’ twin brother, Malik, who also attends the tutorial program, is learning to multiply two-digit numbers — a task his tutor, Matthew Rios, a freshman neuroscience and psychology major from Long Beach, California, was helping him do through a “decomposition” of the numbers.

“I would say it’s a good thing to come here because you get to learn, catch up when you’re not understanding,” Malik said, using a purple magic marker and a whiteboard to work on problems such as 35 times 47.

Malik says the program has made him feel like college is part of his future.

“I ain’t in college in the fourth grade. But I might be here,” Malik told a visitor recently. “I might go to a different college.”

Miles and Malik’s mother, Malaika Bailey, says she has been pleased with the Johns Hopkins tutoring program since her sons started attending it as first-graders back in 2012. She was impressed by the fact that a program official followed up with her a year after she first inquired about the program when her twin sons were kindergartners.

“That right there, I was impressed that he remembered from the year before,” Bailey said.

Bailey — a married, stay-at-home mom who is a cosmetologist by trade — said she continues to send her sons to the tutoring program in order to expose them to college life.

“We’re in the inner city. I just want them to have the best education, which I can’t afford private school at this time, so I’m open to all tutorials that are going to be helpful to them,” Bailey said.

“And it’s Johns Hopkins. You can’t go wrong with that,” she said, invoking the university’s reputation of prestige. “Anything with Johns Hopkins has to be of great quality.”

Bailey credits the program with helping her sons improve in reading.

“And they love it. They look forward to going to tutoring,” Bailey said.

She also credited the program with helping her sons do Common Core math, which is based on a newly adopted set of standards that involves problem-solving methods that parents and others have criticized as being convoluted.

“My biggest problem was the Common Core math. I’m 46 years old,” Bailey said. “To me, one plus one is two. How much explaining can you do with that?”

“They just simplified it,” Bailey said of the tutors helping her sons with the new math. “The kids, when they come home from tutoring, what they’ve been taught in tutoring they will show me is pretty much what the teacher is looking for, and it’s helped me as well.”

While it’s not uncommon for parents such as Bailey to have high regard for tutoring programs, the research on the effects of tutoring is mixed and, in some cases, not very encouraging.

For instance, a 2012 study — titled “Impacts of Title I Supplemental Educational Services on Student Achievement” — found “no statistically significant impact of participating in SES on student achievement in reading or mathematics.”

However, an earlier 2009 meta-analysis by researchers at the University of Arkansas and Arizona State University found that volunteer tutoring “has a positive effect on student achievement.”

“With respect to particular subskills, students who work with volunteer tutors are likely to earn higher scores on assessments related to letters and words, oral fluency, and writing as compared to their peers who are not tutored,” the study states.

A 2013 study by researchers at the Vanderbilt University and the University of Pittsburgh found “strong end of first grade effects” from tutoring, but “weak to moderate effects on measures administered by external evaluators.”

“By the end of second grade, no significant effects were found on any measures,” the study states.

Student directors of the program concede it can be challenging to achieve a measurable impact.

“Genuinely making a difference can be challenging because education must be holistic,” said student director Chelsea Zou, an English and international studies major who plans to become an elementary schoolteacher. “It’s impossible to make up for all the inequalities that our students often face, but we definitely try our best.”

Student director Daniel Perez, a neuroscience major who plans to pursue a career in medicine, recalled various anecdotes that lead him to believe the program is making a difference.

“I remember once calling a parent for a mid-semester check-in and she wanted to thank me and the program for the dramatic effect the program on her daughter’s reading level,” Perez said. “While it can be a challenge and sometimes you do not notice the change from session to session, looking at a child’s level at the beginning and end of the semester definitely shows improvement.”