An innovative partnership on the east side of Los Angeles, which brings together California State, Los Angeles; East Los Angeles Community College; and the Los Angeles Uni­fied School District, has been creating a “college-going culture” among students beginning with ­first-graders.

Since its launch in 2014, GO (Great Outcomes) East LA has been one of the California State University system’s initiatives aimed at increasing graduation rates and eliminating achievement gaps among its students by 2025. CSU Chancellor Timothy P. White has challenged the institutions in the system to reach an achievement gap of zero between underserved students and those with greater advantages. 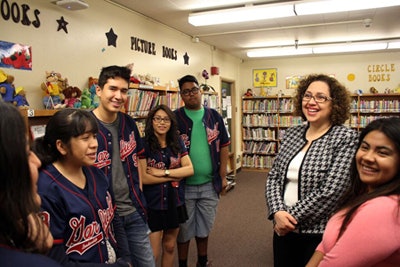 In September, the Board of Trustees approved Graduation Initiative 2025, which is designed to benefit CSU’s 475,000 students across the system’s 23 campuses by reducing barriers to completing their degrees while maintaining academic rigor and quality, according to a news release.

“If you are an underrepresented minority or if you are a Pell-eligible student, your chances of graduating from the California State University system should be no different from your peers, so we’re aiming to completely eliminate those gaps,” says Dr. James T. Minor, who was recently appointed CSU’s senior strategist for academic success and inclusive excellence.

Minor previously served as a deputy assistant secretary at the U.S. Department of Education.

He points out that part of his responsibility is assisting the chancellor in meeting “the very ambitious goals” of the Graduation Initiative 2025 and “establishing CSU as a leader for providing high-quality, affordable higher education — as first and best in class.”

Minor adds his role will include supporting the efforts on all 23 campuses and engaging the 3 million-plus alumni as partners in those efforts.

Now in its third year, GO East LA has already begun the work outlined in the chancellor’s challenge. White called for “establishing a continuous pipeline from preschool to a bachelor’s degree with state support for growth with quality at every level of a child’s education.”

Go East LA constructs that pipeline. It “creates the environment for developing a college-going culture; a culture where all students — starting in the first grade — will be on the path to college and to achieving success,” says East L.A. College President Marvin Martinez, at the launch of the program in May 2014.

University and community college faculty, students and administrators work directly with K-12 students to stress the importance of college and to prepare them academically for higher education.

One key feature of the program is that East L.A. Community College is offering college credit courses in schools.

The courses include subjects such as robotics, languages and theater, which appeal to younger students but also are academically challenging. “The students stay at their home schools and the faculty come to them at those schools,” GO East LA Faculty Director Bianca Guzman explains. “Those courses have been extremely popular because the parents understand there is no fee and students can accumulate credits that they can later transfer [to a college].”

Inspired by Harlem Children’s Zones, the program has exceeded expectations in its first two years, according to Guzman. “We have doubled the number of schools in the pipeline from about 20 schools to about 45,” she tells Diverse, adding that “we went from about 27,000 to about 60,000 kids in the East Los Angeles area.”

According to CSU’s systemwide statistics, more than half of all students are of color. Forty percent were Latino or Hispanic and 54 percent received need-based Pell Grants. The 6-year graduation rate for freshmen is 57 percent and the new target goal would increase that rate to 70 percent.

GO East LA involves what Guzman calls “kind of a roadshow approach” in which college faculty and administrators make group visits to schools and interact with students at all levels in ways that are culturally and developmentally appropriate for the various age groups.

Even the youngest children are involved. One of the activities that has garnered a great deal of local media attention is the awarding of “college diplomas” to kindergarteners to introduce them to the idea of higher education.

But that’s just a portion of the program.

There are also the parent academies. “We bring the parents to East Los Angeles College and to Cal State L.A. so they can see what the campus is like and understand that it is their university,” Guzman says, explaining that these trips are more than routine campus tours. “We explain that this is a public institution and their public dollars are paying for it.”

Guzman points out that many of the parents take an interest in registering for continuing education courses themselves.

One of the benefits of GO East LA is guaranteed admission for those who start in kindergarten into Cal State L.A. and East L.A. College for those who meet the minimum requirements. However, the institutions as well as the students stand to benefit.

“At East Los Angeles College, this program has the potential to increase transfer and graduation rates by wide margins,” Martinez suggests.

In addition to CSU’s initiatives, other measures are being taken on a statewide basis to promote attending and graduating from college. For example, officials announced in September that community colleges will offer one year of free tuition for Los Angeles Unified School District graduates beginning next fall.

“That’s added another layer of popularity to the community college pathway,” Guzman says, noting that the East Los Angeles community being served “is primarily Latino and first-generation college [students]; some of them are immigrants and some are dreamers and undocumented students.”

She says the concept is actually cradle-to-career rather than college, because the ultimate goal is for students to graduate and enter the workforce.

Once there, a variety of support mechanisms are available to help students earn a degree or certificate in preparation for careers.

Guzman says the success of the program is gratifying, and the media attention has spread the word. Plans are now underway for expansion to “GO Central CITY,” involving Los Angeles Community College and the Los Angeles Unified School District-Central.

“So the program will be quadrupling,” Guzman says, and “I think it’s great, but at some point we won’t be able to complete the visits in one year with the staffing we have. So it’s a problem, but it’s a good problem to have.”