New York Governor Andrew Cuomo unveiled a plan to offer free tuition to low and middle income college students attending public colleges and universities in the state. Cuomo spoke at LaGuardia Community College on Tuesday morning, accompanied by Sen. Bernie Sanders of Vermont, who made a similar free college tuition proposal one of the cornerstones of his recent presidential campaign. 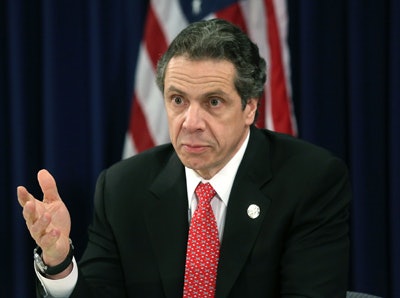 Under the proposal, any college student who has been accepted to one of New York’s two- or four-year colleges or universities will be eligible for free tuition, provided that they or their family earn $125,000 or less annually. The plan would be called the Excelsior Scholarship. If implemented, the scholarship would be the first of its kind in the nation.

In his address, Cuomo made issues of college affordability one of his key points, arguing that tuition prices and average student debt have grown too high for lower income families and individuals to afford. He said that college today is as necessary as a high school degree was in decades past, making college affordability one of the most important issues for New York and the nation alike to address.

“The rule of the game was everybody has a fair shot at success, that is America. And when you take that away, you take away the spirit and the values that made this country this country,” Cuomo said. “The truth is if you want to offer everybody a fair shot, then you have to get up to date and you have to say what high school was 75 years ago, college is today. College is a mandatory step if you really want to be a success.”

The plan requires state legislative approval but, under Cuomo’s vision, would start to be rolled out next fall and fully implemented by 2019, according to The New York Times, which first reported the plan. Currently, in-state tuition at State University of New York (SUNY) schools costs $6,470, and $4,350 in New York’s community college system. When fully implemented, it would be expected to cost $163 million. No details are available yet on how the plan would be paid for.

Sanders threw his support behind the proposal, expressing hope that the state legislature would act on the proposal and that the rest of the nation would follow New York’s lead. Over the course of his presidential campaign, Sanders put forward a proposal to make college tuition free at all public colleges and universities and to reform current federal student loan programs.

“If we are going to do justice to the working families of this country, to low income families, if we are going to have an economy that creates the kinds of jobs that we need for our people, we must have the best educated workforce in the world,” Sanders said.

The announcement also met with support from Education Secretary John King, who likened the plan to proposed federal legislation that would make community college free to qualified students. “While Congress hasn’t acted on legislation that has been introduced in both chambers, states like New York and various cities are taking important steps to make this a reality for students and families,” King said in a statement on Tuesday.

In a statement emailed to Diverse on Tuesday afternoon, SUNY College at Old Westbury President Calvin O. Butts expressed support for the concept of tuition assistance but indicated that further information was needed before he could comment more fully on its potential impact.

“The idea of free tuition is an interesting one. No educator wants to see his or her student saddled with debt,” he wrote. “Learning the details of the proposal will be critical to know exactly how it may benefit our students.”

According to the College Scorecard, just over half of SUNY Old Westbury students have a family income of less than $40,000 and receive federal Pell grants, suggesting that students attending the institution could potentially benefit from Cuomo’s proposal, if it were to be implemented.

Cuomo’s appearance at LaGuardia Community College was the first of six regional speeches that he has planned across the state and that are intended to take the place of the traditional annual State of the State address.