Programs Aim to Open Doors to Diversity in Cybersecurity

Of all the networking opportunities that Alejandra Diaz got as part of Cyber Scholars — a cybersecurity program at University of Maryland, Baltimore County (UMBC) — the one that proved most pivotal is when she got invited to lunch with university president Dr. Freeman Hrabowski and Wes Bush, CEO of aerospace and defense giant Northrop Grumman.

“It was surreal to meet such important people, and I am lucky enough to say that they are now part of my professional network,” says Diaz. 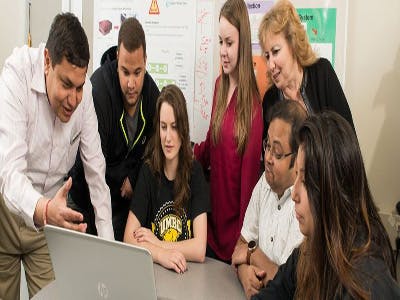 Professor Anupam Joshi, left, collaborates with his students at the University of Maryland, Baltimore County.

The meeting ended up being more than a chance to rub shoulders with the heads of the university and a global security firm.

Rather, the encounter afforded Diaz — who immigrated to the United States at age 5 from Peru with her parents with “virtually nothing” — the chance to speak about her experience and her quest for an internship.

“With that, I was given an interview later on and got an internship at Northrop Grumman,” Diaz recounted.

Since then, Diaz has interned twice at Northrop Grumman, where she was part of two internal research and development teams that worked on several cyber projects.

She plans to intern at the company next summer before she starts her full-time graduate work.

Similar experiences are not hard to find among students in Cyber Scholars at UMBC and Advanced Cybersecurity Experience for Students, or ACES, at the University of Maryland, College Park. Both programs — borne through a partnership with Northrop Grumman — are credited with transforming the way industry and higher education work to bring much-needed diversity to the field of cybersecurity.

“­The University of Maryland and UMBC are hallmark partnerships for us and have enabled us to change the way academia and industry collaborate to build the cyber workforce of tomorrow and ensure students are career ready,” says Marynoele Benson, a spokesperson for Northrop Grumman Mission Systems.

Benson says the partnerships aim to “help build a diverse, talented cyber workforce in response to a critical shortage of trained professionals needed to protect our economic and national security.”

­The field currently lacks diversity. According to the federal Bureau of Labor Statistics, Blacks, Asians and Hispanics collectively make up less than 12 percent of all information security analysts.

And women represent just under 20 percent of all information security analysts, according to the bureau.

Among actual scholars — who are different in that they get scholarships, whereas affiliates and associates do not — 59 percent are women and 18.5 percent are underrepresented minority students.

At UMD, the portion of women and students of color in the ACES program has been gradually inching up, thanks to special outreach efforts, according to Dr. Michel Cukier, director of the program.

Cukier says the boost in the number of women is due to specific outreach efforts at middle school and high schools, summer camps and various workshops.

He says women ambassadors from ACES do outreach to introduce more female students to cybersecurity. A similar effort to have students of color serve as ACES ambassadors may also be in the works.

Cukier says the ACES program is unique in that it is the first cybersecurity program housed within a university’s honors college.

It was launched in 2013 at UMD with a $1.1 million contribution from Northrop Grumman. The gift was renewed for another $2.76 million in 2015 that covers a period of three years. The money covers some scholarships as well as a lab and some staffing, program activities and student activities.

Whereas retention rates in ACES initially didn’t surpass 80 percent, retention rates now hover in the 90 to 100 percent range — in part because the program started connecting students to internship opportunities during freshman year instead of letting them be wooed away by opportunities on the West Coast, one Northrop Grumman official explained during a recent conference on aerospace and defense.

“Finding a niche in a campus as big as UMD can be challenging,” Fangmo says. “In the ACES living and learning program, I was surrounded by a diverse community of people who value cybersecurity. This made group projects easier, friendships easier to create and, most importantly, enabled me to learn a great deal from my friends and peers.”

Diaz received a job offer from Northrop Grumman but turned it down in order to work another internship at the company and complete her master’s next year. The reason it will only take one year is because Diaz is in the B.S./M.S. program, which enables students to take graduate courses while an undergraduate student, with the goal being to need only one extra year to finish a master’s degree.

“This helped me a lot because my family wouldn’t have been able to cover my tuition otherwise and I was able to focus on my studies without worrying about money,” says Diaz, who is also working as a teaching assistant while being a full-time student.

Dr. Anupam Joshi, a professor and chair of the computer science and electrical engineering department at UMBC, says the Cyber Scholars program is distinct within higher education.

“Many other programs only focus on imparting technology training in cybersecurity,” Joshi says. “Our program is a part of formal degree requirements in computer science, computer engineering and information systems.”

Like UMD, UMBC also has a living-learning component — one that Joshi says helps guard against isolation for minorities and women. Joshi also mentioned the cyber-practicum — where students come together each Friday morning to hear from industry speakers and government officials on topics that range from technical aspects of the field to professional development.

“They also conduct peer-led workshops in cybersecurity and work with faculty in research labs,” Joshi says. “They are encouraged to do internships in the industry multiple times and get security clearances in the process.

“As you can see, we have many ‘program elements’ that support our highly diverse student body over and above just classes and technical training in cybersecurity.”

Coursework also helps propel students into the industry. After students take an introductory course in cybersecurity, they have a range of electives that “cover the broad technical spectrum of cybersecurity,” Joshi says.

“These range from cryptography to network security to malware analysis to wireless security to hardware security to information assurance,” Joshi says. “Most of these courses mix instruction in the theory with hands-on projects. In some cases, classes are taught by adjuncts from the government and the industry that are experts in these areas.”

Cindy Greenwood, assistant director of the Cyber Scholars program, reports that all scholars who have graduated have entered full-time jobs in their field of study, “most with multiple offers.”

In the first four cohorts of the Cyber Scholars program, UMBC has had a total of 40 Scholars and 10 Associates.

“All but one of those students — or 97.5 percent — has either graduated in their intended major or is currently pursuing a computer science, computer engineering, or information systems degree at UMBC,” Greenwood says.

At UMD, students in the ACES program take cybersecurity seminar courses with titles such as “Beyond Technology, the Policy Implications of Cyberspace,” “Human Actors and Cyber Attacks,” and “Cyber Psychology.”

“We really want the students to become leaders in cybersecurity,” Cukier says.

“The goal is not for them to be good at coding or building a new firewall. It’s really for them to understand cybersecurity from multiple aspects.”