The number of U.S. public high school graduates is predicted to level off during the next few years. During the same time, the overall amount of high school graduates of color is expected to increase. With the rise in diversity, colleges and universities need to focus on how to not only enroll student of color, but to ensure their success. This goal doesn’t just impact the colleges and universities, it’s also a matter of economic competitiveness and sustainability. As for the institutions with dwindling enrollment, emphasis on diverse students is a matter of survival.

The Western Interstate Commission for Higher Education (WICHE) recently released its annual Knocking at the College Door report that forecasts high school graduate statistics. The most significant finding was that the total number of high school graduates will plateau for the majority of the following decade. This segment attained a record high of approximately 3.47 million in 2012-13 and is anticipated to experience brief growth between 2024-26, reaching an estimated 3.56 million. The plateau is attributed to White student population decline, countered by an increase in minority public high school grads, specifically Asian/Pacific Islanders and Hispanics. 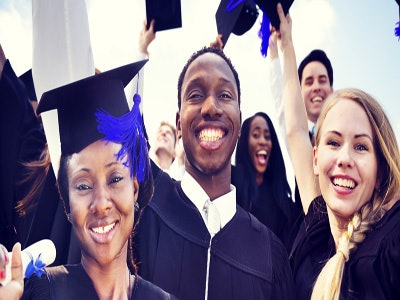 According to the new WICHE report, through 2025 the number of Hispanic high school graduates will grow by 50 percent, to roughly 920,000. The current postsecondary completion rate is 21 percent for Hispanics, compared to 45 percent for Whites. With the Hispanic population experiencing the most growth overall, something must be done to address the fact that Hispanic students have the lowest educational attainment rate. The rate of growth for Asian/Pacific Islander graduates is estimated to increase by 30 percent, from 185,000 in 2014 to 240,000 students in 2032.

As a whole, the Asian/Pacific Islander segment has a 61 percent postsecondary completion rate. However, college attainment varies within Asian subgroups, with some completion rates falling in the low teens. The Black student population is forecast to decline from 15 percent to 14 percent, decreasing by approximately 27,000 students over the next 15 years.

Both Black and Hispanic students have faced obstacles with respect to graduating on time and securing a position paying middle-class wages. It’s believed that one reason this occurs is due to students selecting majors that generally compensate at less than median wages. Education leaders must evaluate why diverse students are choosing majors that don’t pay off financially. This is where high school counseling would be beneficial, to effectively demonstrate the career trajectory and financial implications of pursuing various college majors.

Another influencing factor in lower college graduation rates among minorities is that many are first-generation college students who come from working-class homes. The world of postsecondary education and the professional jobs that follow are not familiar. It’s an overwhelming feeling to simultaneously feel like you aren’t sure what you are doing, but you must be the first in your family to accomplish a college degree. Many colleges and universities are addressing these unique first-generation issues by assigning specific counselors and programs to these students. That’s a trend that needs to continue, particularly as minority college attendance rates rise in the coming decade.

The rise in the minority population of high school graduates poses a challenge, too. The trends illustrate the necessity for more comprehensive college and career counseling during the high school years. It’s imperative to provide students with resources throughout their K-12 careers, in order to ensure their knowledge of workforce outcomes. Counseling prior to making the higher education shift is a method for establishing this connection. Many colleges are shifting to a portfolio process for acceptance, as opposed to just report cards and SAT/ACT scores. These portfolios are started in early high school and help guide students across the high school graduation stage.

Postsecondary institutions must also look for ways to increase opportunity and foster equality, with a major emphasis on appealing to student diversity. An increase in the number of minority college graduates and educated workers will have a positive impact on the U.S. economy and the university landscape must plan now to make it a reality. More students of color and from at-risk backgrounds are seeking higher education as a means to improve their own livelihoods and the end result will be a stronger, well-rounded U.S. economy.