Morehouse Students, Faculty Shut Out of Process of Ousting President

The decision of the Morehouse College Board of Trustees not to renew the contract of Morehouse President John Wilson in its meeting over the weekend was not unexpected, given grumblings about Wilson’s perceived heavy-handed tactics when it came to personnel matters. What was seemingly unexpected, however, was the exclusion of student and faculty trustees from the meeting at which the decision was made. 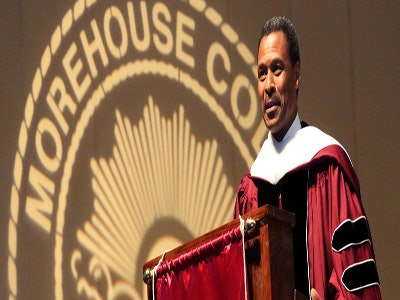 The decision to exclude student trustees from the meeting over the weekend was “blatant disrespect towards the student body,” says student trustee and Morehouse Student Government Association President Johnathan Hill.

As a result of the decision to bar student trustees from the meeting over the weekend, Hill and the two other Morehouse student trustees, Moses Washington and Johntavis Williams, have filed a lawsuit seeking to ultimately nullify the board’s actions over the weekend via a temporary restraining order against board chair Robert Davidson.

“Whether [Wilson’s] contract was to be renewed or not, we just feel like student voices should be in the mix,” Washington says.

“When no one else is on campus, the students are here. We pay more than $40,000 a year to attend this institution, so you must have the input of key stakeholders, including us, and the faculty trustees, if you want to make changes to this institution because it affects us primarily.”

Following a Morehouse Faculty Council meeting yesterday at which Wilson was present, Faculty Council Chair and Morehouse College Department of Sociology chair Derrick Bryan released a statement on behalf of the Morehouse faculty expressing dismay over the actions of the Board of Trustees over the weekend.

“We, the faculty of Morehouse College, strongly object to the decision by the Board of Trustees not to renew the contract of President John S. Wilson without explanation and without the inclusion of faculty and student trustees in the discussion and decision,” the statement reads. “The faculty also expresses concern regarding the timing of the Board’s decision. We demand an explanation and will investigate these decisions.”

Wilson acknowledged that not everybody was happy with the substantial changes made on the academic side of the house during his presidency, including changing academic leadership from a divisional dean structure to a more centralized model utilizing assistant and associate provosts.

“What we hear and what we know is that there is enormous faculty support for the current direction of Morehouse College.”

The board’s decision to part ways with Wilson adds to a substantial list of HBCUs looking for presidents, which includes Alabama State, Florida A&M, and Jackson State of late.

“I believe sustained leadership is important for HBCUs, however we don’t really have the data to know how these decisions impact the short or long term success of the institution,” said Howard University psychology professor Ivory Toldson in an e-mail. Toldson served as executive director of the White House Initiative on HBCUs, a post also held by Wilson.

“The nature of a president’s job is changing. We need to spend as much time assessing the processes by which HBCU leaders are selected as we do with commenting on the circumstances under which they are terminated.”

In an interview with Diverse, Wilson said the HBCU boards should, in general, be very selective when it comes to presidents and, give them the necessary time to implement change.

“There was a change of leadership more than five times at 17 HBCUs between 2000 and 2013. Last I checked a few months ago, there were 17 HBCUs looking for presidents.  … Now Morehouse may be 18,” Wilson says.

“It is not the case that good leaders are easy to find. They’re hard to find. So once you find someone who is being productive and has a productive team, the best thing to do is to back them. That tends not to happen in the HBCU world ….”

In an interview with Diverse, Wilson recounted a number of successes under his tenure at Morehouse, including having raised $69.8 million via private gifts, grants and contracts, a figure that is the most raised in any four-year period in Morehouse’s history. Wilson says that overall, under his tenure, enrollment has been stabilized, finances have been improved, and he also secured commencement addresses from President Barack Obama and Vice President Joe Biden.

“The Board of Trustees recognizes Dr. Wilson’s significant contributions to the College and its students, faculty and alumni,” said Davidson in a statement. “Dr. Wilson turned around Morehouse in a number of ways. During his tenure, Dr. Wilson improved student achievement across a wide range of metrics.”