WASHINGTON — In a contentious Senate confirmation hearing in which Democrats cast her as unqualified but Republicans and supporters portrayed her as a much-needed change agent, secretary of education nominee Betsy DeVos on Tuesday assailed the predominant higher education model as outdated and pushed for “new pathways of learning.”

“For too long a college degree has been pushed as the only avenue for a better life,” DeVos said. “The old and expensive brick-mortar-and-ivy model is not the only one that will lead to a prosperous future.” 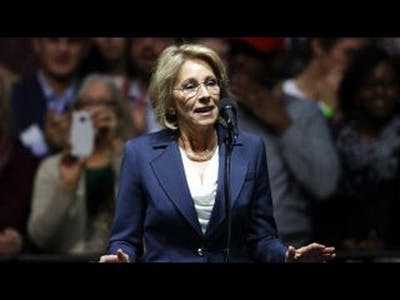 “Students should make informed choices about what type of education they want to pursue post high school and have access to high quality actions,” DeVos said. “President-elect Trump and I agree we need to support all post-secondary avenues including trade and vocational schools, and community colleges.”

DeVos’ remarks came amid an acrimonious three-and-a-half hour hearing in which Democrats lamented the lack of adequate time to question DeVos — a billionaire and wife of Richard Devos, an heir to the Amway fortune — about her extensive business dealings, her philosophy and her philanthropy. Democrats also questioned why the proceeding went forth without a letter from the Office of Government Ethics that addresses any potential conflicts of interest but Republicans said a vote slated for next week will not go forth unless the letter is submitted this week.

Some observers said the hearing revealed little about where DeVos stands on higher education.

“Due to the rushed nature of the questioning, DeVos’ responses on a variety of higher education topics were surface at best,” Cooper said. “Other important higher education issues, such as Pell grants, college affordability, and college outcomes were raised, but there was no opportunity for details or discussion.”

Neal McCluskey, director of the Center for Educational Freedom at the Cato Institute, an organization that identifies as libertarian, agreed.

“All we know is Betsy DeVos agrees that college costs are too high, but we know nothing about how the administration will deal with it,” McCluskey said.

One thing that became clear during Tuesday’s hearing is that Democrats could not pin her down to support any existing programs or policies ushered in under the Obama administration, or, for that matter, to enforce existing law or support longstanding programs.

For instance, when Sen. Elizabeth Warren, (D.-Mass.), asked DeVos if she would work to “ensure no career college receives federal funds unless they can prove they are actually preparing their students for gainful employment and not cheating them,” DeVos responded only that she would commit to “ensuring that institutions which receive federal funds are serving their students well.”

“We will certainly review that rule and see that is actually achieving what the intentions are,” DeVos responded.

That prompted an annoyed response from Warren.

“Swindlers and crooks are out there doing backflips when they hear an answer like this,” Warren continued. “If confirmed, you will be the cop on the beat, and if you can’t commit to use the tools already available to you in the Department of Education, then I don’t see how you can be Secretary of Education.”

Barmak Nassirian, director of federal relations and policy analysis at the American Association of State Colleges and Universities, raised concerns about how DeVos embraced accountability in general terms but declined to uphold gainful employment regulations.

“It was very disappointing to hear her express support for accountability in the abstract, and then walk it back by refusing to support GE,” Nassirian said.

When asked by former presidential candidate — Sen. Bernie Sanders, (D-Vt.)  — if she would work with him and others to make public colleges and universities free, DeVos said free college was “an interesting idea” that she looked forward to discussing but added the caveat: “There’s nothing that is truly free. Someone is going to pay for it.”

DeVos also hinted that federal TRIO programs will get a fresh look.

“I do think we can do a better job of preparing students, informing them before they enter college,” DeVos said.

DeVos said while she is aware that TRIO helps mentor students who might not otherwise go to college, she questioned whether there was “another more effective way to advance that or to replicate that or use that in a new way to help increase the participation of students that may not otherwise pursue higher education.”

Kimberly Jones, vice president for public policy and communications at the Council for Opportunity in Education — an organization that advocates for federal TRIO programs — defended the programs as “one of the best ways to leverage federal Pell Grants because they produce a steady stream of work-ready graduates.”

DeVos also drew ire from Sen. Tim Kaine (D-Va.), who tried to pin her down on whether schools that get federal funds should meet the requirements of the federal Individuals with Disabilities Education Act, or IDEA.

“I think they already are,” DeVos said.

“I’m asking you a ‘should’ question,” Kaine said.

“I think that is a matter that is best left to the states,” DeVos responded, prompting Kaine to ask whether parents of children with disabilities should just move around if they live in a state that is not good at enforcing IDEA.

DeVos would only say upholding IDEA was “worth discussion’ and that she would “review” it.

Republicans and supporters embraced DeVos as the likely education secretary, despite Democratic detractors who decried her lack of experience in public education.

Former U.S. Senator Joe Lieberman, who served as a board member for DeVos’ American Federation for Children, spoke on DeVos’ behalf and said the fact that DeVos does not hail from the education establishment is an asset, not a liability.

“Today I believe that’s one of the most important qualifications that you could have for this job,” Lieberman said. “We need a change agent, and an education reformer to be education secretary, a leader who has one big goal, which is to get every child in America, regardless of family income or zip code, a first class education, and that is the kind of education secretary Betsy DeVos can and will be.”

Sen. Lamar Alexander (R-Tenn.) — a former secretary of education under Geoge H.W. Bush and chair of the Senate HELP committee — said despite criticism of DeVos for using her wealth to influence policy to support vouchers and charter schools, that she is but one of a long list of charter school and voucher supporters that include former presidents — from George W. Bush to Barack Obama — as well as former secretaries of education, senators and a good deal of states.

He likened vouchers to the GI bill, Pell grants and student aid, which all follow students to the college of their choice.

“Why is such a great idea for college students such a bad idea for K-12 students?” Alexander asked.