Costs of College Meal Plans Getting Tougher to Swallow

In front of floor-to-ceiling windows through which they can admire the idyllic setting, and in other dining halls around the meticulously landscaped campus, they can have their pick of food all day, from make-your-own waffles and made-to-order omelets to fresh-baked pastries, Niman Ranch meats, daily artisan plates, local seafood, and a variety of ice creams. 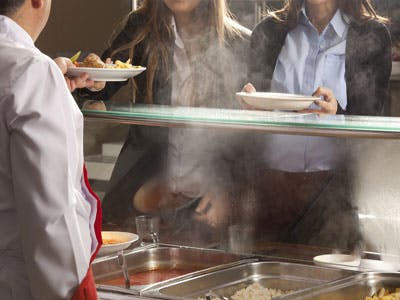 Students say the fare is good, and they like the feeling of community in their dining halls. However, they pay for it. The mandatory meal plan costs $7,442 per student, per year.

“Sometimes I look at the meal I’m eating and I’m, like, I have two eggs and toast. This is not worth $12,” said Mieke Bovbjerg, a 19-year-old sophomore from Pittsburgh. That’s what Bovbjerg figures she spends per meal, considering she skips a few over the course of the academic year.

An analysis of campus dining contracts from around the country shows that colleges are charging students far more for each meal than the typical American spends to eat at home, helping drive the rising cost of higher education.

The average college and university charges about $4,500, or $18.75 per day, for a three-meal-a-day dining contract that covers the eight months or so of a typical academic year, according to information the institutions provide to college guide Peterson’s.

That’s more than the average $3,989, or less than $11 a day, that the U.S. Bureau of Labor Statistics estimates a single person spends for food in a year, meaning undergraduates appear to be forking out 70 percent more per day on campus than they would likely pay to cook and eat on their own.

On many campuses, the food costs even more than that. According to the information colleges provided to Peterson’s, more than 20 charge the equivalent of at least $9 per meal, or twice what the average American spends on food. At Wellesley, the average comes to more than $10 per meal. (The college did not respond to questions about meal plan costs.)

And the disparity is getting bigger. The price of room and board has increased 28 percent in the last 10 years at public four-year universities, according to the College Board. That is faster than the cumulative rate of inflation during that time, which the Bureau of Labor Statistics puts at 20 percent.

This is at least in part because, with states cutting their higher education budgets and families chafing at continuing tuition hikes, universities and colleges can make money from their meal plans.

Federal figures show that private, nonprofit colleges and universities collectively took in $400 million more than they doled out for auxiliary services — the budget category that includes room and board, along with athletics, bookstores, parking, and other things not immediately related to instruction or research. Public universities made $6 billion more than they spent. That was in the 2013-14 academic year, the most recent figures available.

Colleges run their dining services divisions as self-supporting enterprises, and like businesses they are expected to turn at least a small profit, said Bob Shea, senior fellow for finance and campus management at the National Association of College and University Business Officers.

Notre Dame, for instance, considers its dining and other auxiliary services “a major contributor of revenue to the university’s academic mission.” In its strategic plan, it singles out its dining operations as “creating a culture of hospitality and service excellence for campus constituents and visitors while providing financial returns.”

Schools can further lower their costs and increase their profits by outsourcing food services. Nearly 40 percent of member institutions in the National Association of College and University Food Services, or NACUFS, now contract out all or part of their campus dining.

Companies including Sodexo, Aramark and Compass Group — which serve hospitals, jails, stadiums, and other institutions in addition to colleges and universities, and also operate in other countries — bring economies of scale that can make it cheaper to provide services.

While several institutions require in their contracts that these vendors price their meals fairly, there is no obligation to pass on savings to students.

In fact, part of what the companies earn goes back to the universities in the form of commissions, signing bonuses and other payments. Invitations for proposals made by colleges and universities to food-service contractors, not usually noticed by the public, show that most expect to make money from their students’ meal plans.

Youngstown State University, for example, in such a request, said it wanted “a reasonable financial return.” Florida A&M University was more specific; it picked the company that offered at least $18.5 million over 10 years in commissions, even though a lower bidder pledged more improvements to dining halls and kitchens.

In response to an invitation to bid on the contract, the food-service provider Chartwells promised Southeast Missouri State University, in writing, “the maximum financial return to the university.” In addition to $6.5 million in facility improvements and nearly $3 million a year in guaranteed commissions, the company offered a $500,000 signing bonus, cheaper food for prospective students who visited the campus for recruiting events, and 14 free meal passes for university employees per semester.

Many universities also have deals with beverage companies such as Coca-Cola, whose products they serve exclusively to their students, and from which they receive further commissions.

Like housing, bookstores, vending machines, and conference centers, dining halls help diversify a college’s revenue stream from a principal reliance on tuition, according to Shea.

For many students, however, more expensive meal plans mean more borrowing and tough decisions about whether to trade convenience for cheaper living off campus.

In some cases — especially as freshmen — they don’t have a choice.

Gatanna Andrade, a first-year student at the University of Tennessee at Knoxville, for example, is required to live on campus and to buy a $3,892-a-year dining plan, even though she is not a big fan of the food and the dining halls are so far from her dorm and her classes that she hardly ever eats in them.

University officials say it’s unfair to compare what they charge with what people pay to eat at home. Even though they can save on the cost of ingredients by buying in bulk, they say they generally serve restaurant-quality food prepared by professional chefs in clean, attractive facilities that come with personnel and maintenance costs.

In many parts of the country, they are competing for employees with the growing off-campus restaurant and hospitality industries, said Amy Beckstrom, president of NACUFS and executive director of housing and dining services at the University of Colorado Boulder.

Building an annual surplus into dining services budgets also creates a cushion from which institutions can draw when it’s time to upgrade their facilities, said McCuskey. Newer facilities and equipment can increase efficiencies, but require an upfront investment for which someone has to pay.

Some of the fault for high dining prices on campus lies with students — especially those less likely to worry about the price, including high-income, full-tuition-paying students universities and colleges are desperate to attract — who want high-quality food in lots of incarnations: vegan, vegetarian, gluten-free, sustainable, ethnic.

“This is the demand of some students, not others, and yet all students ultimately pay the price for this,” said Sara Goldrick-Rab, a professor of higher education policy and sociology at Temple University, who studies the cost of college.

Students such as Gatanna Andrade, back at the University of Tennessee at Knoxville.

“That money could definitely be going somewhere more productive,” Andrade said. “But at this point there’s not a lot I can do about it.”