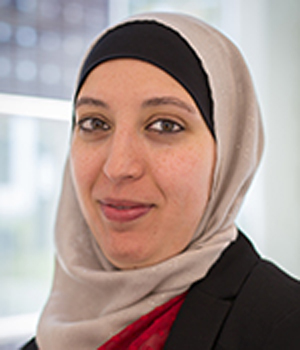 Though she spent a year as a manufacturer’s process analyst, going into teaching, she says, was intentional. Particularly, now, she revels in being an instructor on a campus where almost 90 percent of students are of color and help comprise the greatest percentage of low-income, first-generation students of any of the University of California system’s 10 outposts.

“I’m a role model for male students,” says Qattawi, who was among the first who joined Clemson University’s automotive engineering program. “And I encourage female students to speak up. I’ve noticed that, when students are working in teams, female students often let the males lead. But once you say to those young women, ‘Oh, you did a good job.’ … You watch them start to flourish.”

Witnessing such transformation, in turn, helps to shape Qattawi’s own teaching. She is steadily tweaking and refining, she says. That includes trying to reach “an average teaching speed” in classrooms dotted by students who prefer a slower pace of engagement or an accelerated one or something midstream.

“It can be very difficult to get to that right average speed,” says Qattawi, calling herself perhaps, preternaturally, fast moving.

Students play a role in professors’ professional development, neophytes especially. “I learn as much as they learn,” she says. “And it’s not just about the fundamentals of teaching, it’s about how to handle the students, how to guide the students. Every time I teach the same course, I learn more. It is a much more complicated process than I thought it would be when I first started.”

Her doctoral program was fabulous, but included no instruction on pedagogy, Qattawi says. To fill in the gaps, she attends UC Merced workshops on instructional techniques and reads much about teaching. She gauges student progress by their classroom attendance, homework assignments, ample quizzes, and letting them evaluate her methods mid-semester, too, not just at semester’s end.

“You have to monitor yourself and monitor the learning for your students all along the way,” she says. “You can have very happy students and students who bluntly tell you what went right or wrong. I take all that feedback into consideration.”

What also informs her teaching are her remembrances — where her English teacher, Mr. Fix-It dad, when she was 5, took her to the boys’ school where he taught while she sat in the front row. He was signifying that she could follow her preferred path and tear down walls.

“When I got to Clemson,” Qattawi says, “the engineering program was in a new building. … One of the staff told me I was the only female and that there were 160 male students. I said, ‘Oh, even in the U.S.’ …  Hopefully, from one generation to another, we will continue to see more change.”