Filling the shoes of longtime and oft-quoted education advocate Kati Haycock, CEO and founder of The Education Trust, was always going to be a tall order. The announcement that former U.S. Secretary of Education John King has been named Ed Trust president and CEO is winning plaudits from many.

King is “an extraordinary choice for the position of president. His commitment to serve the most vulnerable students in this country, and to close the achievement gap has long been his mark in education everywhere that he’s gone, and most recent in the Department of Education,” says Dr. Martha Kanter, executive director of the College Promise Campaign and senior fellow at the Steinhardt Institute for Higher Education Policy at New York University. Kanter also served as under secretary of education in the Obama administration. 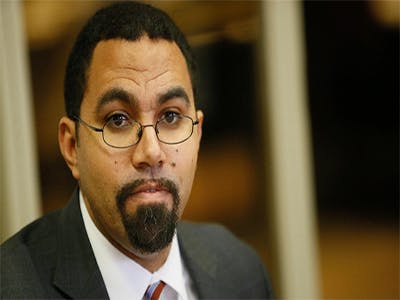 “He’s a terrific choice because he’s going to keep students first and foremost in the center of the policy conversations. And that’s what Kati Haycock was able to do. And we still have problems, and the communities have got to come together. And John is somebody who can bring people together. And that’s what’s needed to make policy and advocacy sustainable.” Kanter adds.

“I’m excited,” says Karin Chenoweth, Ed Trust writer-in-residence. King “brings such a wealth of experience from his background. He was the son of a teacher. A teacher. A principal. A school founder. (NY) State commissioner and U.S. secretary of education. That spans such a wide range of experience…he will be able to take Education Trust into the future.”

According to an Ed Trust release, King began his career in education as a high school social studies teacher in San Juan, Puerto Rico and Boston, Massachusetts. He then co-founded the Roxbury Preparatory Charter School in Boston, which won The Education Trust’s Dispelling the Myth Award. That school grew into a network of public charter schools, called Uncommon Schools, which he co-managed.

From 2011 to 2015, King served as the first African-American and first Puerto Rican commissioner of education in New York State, then was tapped by President Obama in 2015 to lead the U.S. Department of Education.

Dr. Derek Briggs, professor and chair of the Research and Evaluation Methodology program and the director of the Center for Assessment Design Research and Evaluation at the University of Colorado Boulder, calls King’s selection “great news for Ed Trust.” Briggs says he’s known King since his days as New York State commissioner of education and in New York, Briggs witnessed “somebody that was very open to different ideas and certainly pursued policies that he thought were in the best interests of the state and students.

“At times he got a lot of pushback. In New York, it’s almost impossible not to. …  What I think is more important is when you take a position, how do you respond when people voice disagreement? Do you listen? Do you seek evidence? In this day and age, somebody that responds to evidence is important. My interaction with him is that he’s always been that kind of a person.”

According to the release, King told the Ed Trust staff yesterday, “The Education Trust’s mission is my life’s mission. I lost my parents at a very young age. But in my New York City public schools, I was fortunate to have great teachers who made school engaging, challenging, and nurturing.

“If I had not had those teachers, I wouldn’t be alive today. They literally saved my life. At The Education Trust, I want to help more kids like me — kids for whom schools make all the difference — get the education they need and deserve.”

According to Ed Trust, King will begin in his new role on March 6, 2017 and Haycock will step down after a brief transition. For more information, visit The Education Trust on the web at www.EdTrust.org.