WASHINGTON — Newly minted U.S. Secretary of Education Betsy DeVos made her debut Wednesday  at the agency she now oversees with a call for unity, a bit of self-deprecating humor, and a thoughtful emphasis on diversity and inclusion.

“Diversity may be viewed as cliche, but I believe that getting to know, working with, befriending and including people who are different from ourselves is enriching and expanding,” DeVos told the scores of staffers assembled for her afternoon talk in an auditorium at the Lyndon Baines Johnson Education Building.

“And if we model it ourselves, how much easier will it be to encourage students to do the same?” 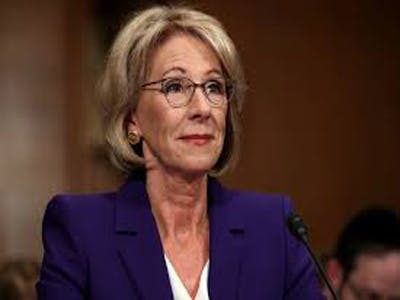 DeVos takes the reins at the Education Department after what she acknowledged was a rocky start.

“For me personally, this confirmation process and the drama it engendered has been a … bit of a bear,” DeVos said in a comedic nod to the jokes that followed her confirmation hearing when she said some schools might need firearms to protect students from grizzly bears in response to a question about whether guns had any place in schools.

But DeVos also sounded a tone of optimism that — despite the animosity that ensued from the election, as well as the continuing political battles that are playing out as  the administration of President Donald J. Trump seeks to implement new policies — the nation could come together for the greater good.

“Let’s acknowledge: We’ve just come through one of the most bruising, divisive elections in modern times,” DeVos said. “And that’s okay. Our republic is resilient. We as a people are resilient.

“The rhetoric and the words can get hot and heated, and the animosity often seems unending,” DeVos continued. “And that’s okay, too. People are passionate and moved by deeply held views. We are a pluralistic culture and we must celebrate our differences.

“But all of us here can help bring unity by personally committing to being more open to, and patient toward, views different than our own.”

DeVos described herself as a “door open” kind of person who “listens more than speaks.”

DeVos — a billionaire philanthropist who has been criticized for her investments into what she has referred to as the “education industry” — projected a persona that belied the portrayals that protesters have proffered of her as being bent upon plundering public education by promoting charter schools and vouchers.

“There is no greater achievement in the world than positively changing the life of a child by bending the arc or breaking the cycle through education,” DeVos said. “This is what motivates me. This is why education as a lifelong pursuit is my passion.”

She acknowledged stakeholders and constituents that ranged from “students who may be struggling, to hard-working teachers who feel stifled, special needs students and families to whom we owe our full support, and leaders and administrators seeking clarity and evidence-based solutions.”

It was clear, however, that critics won’t be easily convinced until they see what kind of policies DeVos actually pursues. Indeed, before DeVos arrived, protesters gathered outside the Education Department and chanted things such as “A, B, C, D, Betsy DeVos is not for me!”

Despite all her platitudes and positivity, DeVos revealed nothing substantial about her agenda — K-12, higher education or otherwise.

At the same time, however, she didn’t take any potshots at the Obama Administration like President Trump did during his inauguration speech.

She made an appeal for people to “put aside any preconceived notions.”

“Let’s recognize that while we may have disagreements, we can — and must — come together, find common ground and put the needs of our students first,” DeVos said. “And when we do disagree, let us set an example by being sincere and honest, passionate but civil, while never losing sight of our shared mission.”

DeVos challenged members of the department to “think big, be bold, and act to serve students.”

“And I will promise you this,” DeVos said. “Together, we will find new ways in which we can positively transform education.”