While the federal budget proposal released by the White House stresses national security and public safety, higher education leaders blasted the spending blueprint Thursday as one that will make college less accessible, less affordable and set back the nation’s workforce and research interests. 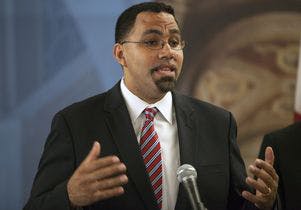 John B. King, Jr., is CEO and president of The Education Trust, and former U.S. Secretary of Education under President Barack Obama.

Among other things, stakeholders took the White House to task for seeking to “raid” surplus Pell grant funding for $3.9 billion, seeking to scrap a separate program that enables colleges and universities to target assistance toward their neediest students, and cutting back on federal college access programs — such as GEAR UP and TRIO — that they say provide crucial help to low-income students.

“If this proposal were enacted, all students, particularly students of color and low-income students, throughout the entire continuum of our education system would suffer, as would the nation’s businesses who desperately need a skilled workforce to be successful,” said John B. King, Jr., CEO and president of The Education Trust, and former U.S. Secretary of Education under President Barack Obama.

“College and community leaders should be outraged by these proposed cuts that will harm the very people President Trump promised to protect,” said Dr. Michelle Asha Cooper, president at the Institute for Higher Education Policy.

“Instead of raiding existing Pell Grant program funds, the Trump Administration should call upon Congress to enact smart and impactful investments including year-round Pell, indexing the Pell Grant to inflation, increasing the maximum award, and supporting the SEOG program,” Cooper said, using the acronym for the Supplemental Education Opportunity Grant program, which the budget targets for elimination.

There were no shortage of critics who made similar observations of President Donald Trump’s proposed budget — formally titled in the style of his campaign rhetoric as “America First: A Budget Blueprint to Make America Great Again” — who assailed the budget’s proposed increase to defense and security spending by $54 billion while at the same time proposing a $9.2 billion cut to spending at the US Department of Education — a 13 percent decrease.

“A budget that puts America first must make the safety of our people its number one priority— because without safety, there can be no prosperity,” President Trump said in the budget proposal. It also says it “protects support for Historically Black Colleges and Universities and Minority-Serving Institutions” by “maintaining $492 million in funding for programs that serve high percentages of minority students.”

But such platitudes on the purported need to “reprioritize Federal spending so that it advances the safety and security of the American people,” did little to deflect the criticism of Trump’s proposed education cuts.

“We are quite disappointed,” said Barmak Nassirian, director of federal relations and policy analysis at the American Association of State Colleges and Universities.

“This budget framework, if enacted, would undermine access and significantly weaken American higher education on every front,” Nassirian said.

Nassirian noted that the budget also “drastically cuts investments in research.” The proposed budget, for instance, seeks to reduce National Institutes of Health’s spending by $5.8 billion to $25.9 billion.

“These cuts are untenable and could not be absorbed without dramatically reducing access to college for many students, increasing the already alarming educational debt bubble, and undermining quality in American higher education,” Nassirian said.

The proposed budget seeks to “cancel” $3.9 billion from surplus funding for Pell Grants.

While some say it’s unclear what is meant by the verbiage “cancel,” Ben Miller, senior director for postsecondary education at the left-leaning Center for American Progress, described it as a “cut” to Pell that is “robbing hard earned savings built up over years to go toward basically nothing.”

“While Congress would be prudent to not touch the surplus at all, to take part of it and put no additional money to student aid will do nothing to improve affordability,” Miller said. “And calling that cut a ‘safeguard’ to keep Pell sustainable is a slap in the face to students,” Miller said, citing a passage from the proposed budget.

Justin Draeger, president and CEO of the National Association of Student Financial Aid Administrators, or NASFAA, said the proposed budget would “close the door for countless students around the country who rely on federal student aid programs to pay for college.”

“Using budgeting tactics that take valuable financial resources away from low- and middle-income students not only hinders their pursuit of a college education, it delays the economic growth of the country,” Draeger said.

Draeger  took the White House to task for its proposal to eliminate the Supplemental Educational Opportunity Grant (SEOG) Program — which provided grants to some 1.5 million students in 2013-2014.

The White House says SEOG is “less well targeted” than the Pell grant program and that getting rid of it would “reduce complexity” and ultimately save $732 million.

Erin Timmons, director of communications for NAFSAA, said the SEOG program provides grant assistance to students who show “exceptional financial need.” The average award amount was $598 and just under 70 percent of grant recipients came from families whose income was less than $30,000, Timmons said.

“Schools have awarding discretion within certain parameters, which allows them to target the funds to the neediest students based on individual circumstances,” Timmons explained. She said the awards are made up of 75 percent federal funds and 25 percent qualified nonfederal funds, “so without FSEOG, schools would be forced to find other means of support for their neediest students.”

The White House’s proposed budget seeks to reduce Federal Work-Study “significantly and reforms the poorly-targeted allocation to ensure funds go to undergraduate students who would benefit most.”

It does not spell out how Federal Work-Study would be reformed but others, such as the Center for Analysis of Postsecondary Education and Employment, have been pointing out as of late that students who are most likely to benefit from the program have the least access to it.

With GEAR UP — an acronym that stands for Gaining Early Awareness and Readiness for Undergraduate Programs — the Trump administration would only fund GEAR UP “continuation awards” until a pending “rigorous evaluation” of a portion of the program is complete.

Ranjit Sidhu, president and CEO of the National Council for Community and Education Partnerships, or NCCEP, an advocacy organization for the GEAR UP program, said he was unclear on what evaluation was being referenced. He also said that the proposed cuts to GEAR UP would “represent a dramatic and unnecessary narrowing of the American Dream for families everywhere.”

“That’s a 32 percent differential,” Sidhu said. “So if (the cost of GEAR UP) is $505 per year per student, which is what we currently spend, that’s impact.”

The White House budget calls for $808 million for the Federal TRIO Programs and $219 million for GEAR UP, “resulting in savings of $193 million.”

It says funding for TRIO programs is “reduced in areas that have limited evidence on the overall effectiveness in improving student outcomes.”

Despite the White House’s assertion that there is “limited evidence” on the impact of TRIO, Kimberly A Jones, vice president for public policy and communications at the Council for Opportunity in Education, an organization that advocates for TRIO programs, says the council is “confident that there is strong evidence for the impact of each of the TRIO programs and we continue to work with congressional supporters of the TRIO programs – from both sides of the aisle – to expand and improve these critical college access and retention services for low-income, first-generation students and students with disabilities.”

U.S. Secretary of Education Betsy DeVos said the proposed budget “keeps with President Trump’s promise to focus the U.S. Department of Education on its mission to serve students.”

DeVos also said the budget achieves “streamlining and simplifying funding for college and continuing to help make college education more affordable,” although her statement did not explain what she meant.

DeVos stressed the budget’s focus on evidence of effectiveness.

“Taxpayers deserve to know their dollars are being spent efficiently and effectively,” DeVos said. “This budget is the first step in investing in education programs that work.”

Terry W. Hartle, senior vice president for government and public affairs at the American Council on Education, the main coordinating body for the nation’s colleges and universities, said the Trump administration’s budget faces a complex political battle and is far from a done deal.

“This administration likes big, bold pronouncements, and this certainly qualifies,” Hartle said of President Trump’s proposed budget. “But translating these ideas into policy is likely to be very challenging, because many of the ideas included in the budget run contrary to what have historically been strong bipartisan priorities.”

Hartle cited the proposed $5.8 billion cut to NIH as an example.

“It’s a safe bet there are not too many members of Congress who say we’re spending too much money on cancer research,” Hartle said. “This is going to be a very politically challenging budget for the administration, and I suspect there are gonna be a lot of twists and turns in the road ahead.”