WASHINGTON — In order to reduce disparities and make college more accessible, policymakers and higher education leaders should initiate a national discussion to establish a free and universal K-14 system.

That was one of the key arguments made Wednesday at a higher education forum meant to highlight ways to increase postsecondary attainment and give students a better shot at securing one of the growing number of jobs that require education beyond high school. 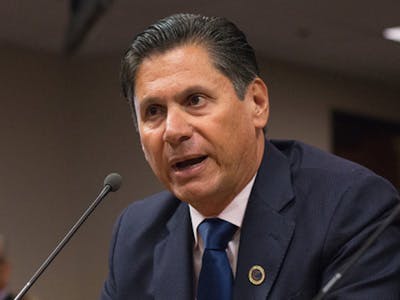 Eloy Oakley is chancellor of the California Community Colleges.

“We have to reorganize ourselves around a different set of credentials — and finance those credentials — in order to allow people to get into the workforce,” said Eloy Oakley, chancellor of the California Community Colleges. “It’s well beyond the 12 years of high school now.”

“It really is time for a national conversation about this,” said Ben Cannon, executive director at the Oregon Higher Education Coordinating Commission.

Cannon said that, while the Oregon Promise — a state grant that covers most tuition at any Oregon community college for recent high school graduates and GED recipients — is reliant on federal dollars, there’s still not a “holistic conversation about how to take those federal resources, how to take those state resources and optimize them for community college access and success.”

“Ideally we would be doing this in a true partnership model in conversation with the federal government,” Cannon said.

David Wright, chief policy officer for the Tennessee Higher Education Commission, said that, while he supports state-federal partnerships, one of the main drivers of promise programs — such as the Tennessee Promise — is local and state knowledge about what works best for participants.

“One of the elements that really makes the promise program go is the local and state knowledge of the student, that nuance that we’re able to put in our own spins,” Wright said, in reference to the community service and mentorship components of the Tennessee Promise.

“If the scaffolding, if the infrastructure gets too big, you might lose some of that local innovation, so that needs to always be allowed for,” Wright said.

Not everyone at Wednesday’s forum — themed “Higher Education at a Crossroads” and hosted at the Newseum by The Atlantic — agreed wholeheartedly with the push for a K-14 system.

Among the critics was Sheila Bair, president at Washington College, who questioned the impetus behind free community college in light of shortcomings she said exist at the secondary level.

Peter McPherson, president of the Association of Public and Land-Grant Universities, said his member institutions would welcome the additional financial resources associated with making college free, but added, “I think we need to be held accountable for how we spend what money we get, and we live in a world that’s really tight.”

Oakley said community colleges should get more recognition as the means to the jobs that President Donald Trump has said he wants to add to the economy.

“We’d like to see a recognition that community colleges are a place to invest to get people to the jobs that the president wants to create,” Oakley said. “We can talk about job creation all day, but unless there’s a workforce with skills to enter those jobs, then there’s no point.”

Oakley also said there needs to be greater attention on how to finance students to complete community college, including year-round Pell Grants.

“We want them to get through more quickly, take as many units as possible,” Oakley said. “In order to make that happen, we need to have the financing available to do that.”