Retreat Provides Opportunity to Tune In to Black Males

For all of the disheartening statistics that we hear about Black male underachievement at the collegiate level, still not enough research trains a spotlight on the individual narratives of Black male college students, particularly those who enroll at predominantly White institutions.

Even as many college and university administrators pledge each year to diversify their student populations, the challenges that beset Black males remain daunting and should be a growing concern for all of us who care deeply about the future of higher education. 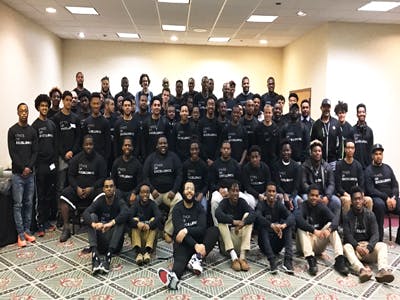 Students from across the country attend the National Black Male Retreat organized by the Todd Anthony Bell National Resource Center at The Ohio State University.

Several years ago, President Obama ignited a national conversation about the plight of Black males with his My Brother’s Keepers initiative, but the longevity of those efforts remain unclear, particularly in the wake of Donald J. Trump’s ascension to the White House.

Administrators who really want to understand what Black male college students are thinking and experiencing should actually spend some time talking to those experts who engage with these students on a regular.

Dr. Derrick Brooms, an associate professor at the University of Louisville, has made a significant contribution to the field with the recent publication of his book Being Black, Being Male on Campus: Understanding and Confronting Black Male Collegiate Experiences.

Brooms interviewed a diverse group of 40 Black males attending two separate historically White institutions with academic majors in everything from mechanical engineering to Black studies. The results are informative.

“These were a diverse group of guys, but they all have the same kinds of wants and desires,” Brooms said of his subjects. “They all wanted to be successful academically and to be the best individuals that they can be. And yet, they often feel isolated on their campus and feel like no one cares about them.”

Grappling with students’ perception of what some scholars have called a “sense of belonging,” is essential, say experts, if we are somehow going to bridge the gap and improve the collegiate experience for thousands of Black male college students who feel unsupported.

In this regard, The Ohio State University may be leading the way.

The Todd Anthony Bell National Resource Center on the African American Male at OSU provides a rare opportunity for Black male college students to convene each year at a secluded lodge in the woods of Ohio.

“The National Black Male Retreat is one of the many prominent meetings coordinated by the Bell National Resource Center; however, it is the only one primarily focused on improving life outcomes for Black male college students,” says Dr. James L. Moore III, EHE Distinguished Professor of Urban Education and Executive Director of the Bell Center. “My staff and I look forward to this event every year because we are afforded the unique opportunity to showcase The Ohio State University and interact and engage young people across the United States and beyond.”

It’s a powerful gathering, for sure. Young men are encouraged to be vulnerable. By the end of the weekend, complete strangers are now friends and leave the retreat determined to excel and to help lend a hand to a struggling Black male student coming behind them.

Now in its 12th year, the National Black Male Retreat embodies much of what is missing from the national discourse on Black males. Not enough of our so-called “experts” on Black males are listening to what young Black males have to say.

Providing a safe space for these diverse men to engage in conversations about self-awareness, unity, academic motivation, leadership, and manhood is critical.

Yet, despite this diversity, their Black maleness provides an opportunity to engage in serious dialogue about what it means to be treated as “other” when they roam about their campuses on a daily basis.

“We all have experienced the same kind of phenomenon on our campuses,” said Kenneth Cole, 23, a University of Wisconsin senior, who participated in the retreat this past weekend.

“This retreat is very integral,” said Cole, a native of Los Angeles who is majoring in sociology and legal studies with a certificate in criminal justice. “I know that often on our campus, mental health and wellness can take a toll. It’s good to have a place to go to where brothers and relax and be themselves and be stimulated without the same kinds of pressure.”

R’mon Harvell, a sophomore at Berea College in Kentucky, agrees. There are so few Black males on his college campus — as students, staff or professors — that he couldn’t wait to fellowship with other Black men.

Seeing so many Black Ph.D. mentors at the weekend gathering has convinced Harvell that he wants to go on to graduate school.

“It is reassuring to see so many African-American males who have succeeded,” said Harvell, who is a physical activities specialist major with a minor in sports management.

Tai Cornute, program coordinator at OSU’s Bell Center, says that the interest in the retreat continues to grow.

And that’s a good thing.

“The reach is getting wider, and the number of students is getting bigger,” said Cornute, who organizes the yearly gathering. “I can’t imagine a better turnout.”

Jamal Eric Watson is the executive editor of Diverse: Issues In Higher Education. He can be reached at jwatson1@diverseeducation.com. You can follow him on Twitter @jamalericwatson.