For Dr. Leonard Moore, a history professor and associate vice president of academic diversity initiatives at the University of Texas at Austin, no college tour for prospective students would be complete without a look inside a classroom.

A classroom where class is in session, that is. 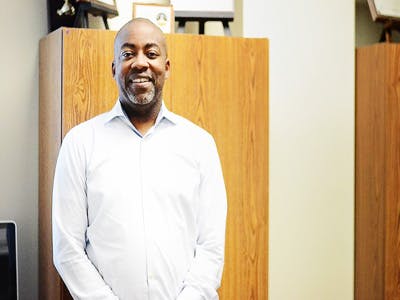 “I never understood college tours that occur on a Saturday where you’re just looking at buildings,” Moore said. “I’m big on putting students in the classroom. I think it’s powerful when kids and their parents are actually inside a college classroom.”

So back in the fall of 2016 — with the nation in the throes of one of the most contentious elections in history and student protests roiling campuses nationwide — Moore worked with admission leaders at UT Austin to give prospective students and their families a unique look at the kind of spirited discussions students were likely to have on campus if they enrolled.

More specifically, Moore and the admission office teamed up to allow students and their families to visit Moore’s class, “Race in the Age of Obama.”

“This particular course is not only one of, if not the most popular undergraduate courses on campus, but it also has one of the most diverse enrollments, including students from non-minority groups with varying political beliefs,” explained Ka’rin Thornburg, associate director of admissions at UT Austin and chair of the Inclusion, Access, and Success Committee for the National Association for College Admission Counseling, or NACAC.

“Given the election this fall, as one could imagine, class discussions were quite passionate,” Thornburg said.

One particular visit to Moore’s class followed an incident in October in which a group known as the Young Conservatives of Texas sparked a protest by holding an “affirmative action bake sale” in which people from different ethnic groups were allowed to pay different prices for cookies “to illustrate this disastrous policy that demeans minorities” at UT Austin.

“Dr. Moore incorporated this incident into his discussion,” Thornburg said. “Our prospective students and families visiting the class that day told the admission counselors how much they appreciated the visit — that it was a ‘lively’ but healthy discussion and that it was reassuring to know this kind of discourse was encouraged and facilitated.”

Moore said it takes bravery on the part of admission officers to allow such a class visit “because when the students come, we don’t sugarcoat anything.”

But the class visits also pay off in a variety of ways, Moore said.

“It demystifies the college experience,” Moore said, adding that it enables first-generation college students and underrepresented minorities to visualize themselves on campus.

“When you bring kids from the schools and put them in a college class, they realize it’s not hard,” Moore said. “They really can do this stuff.”

“The admissions office has told me if they can get the parents to a visit on campus and to class, that the yield on those students is significantly high,” he said.

The course visit at UT Austin is remarkable for a number of reasons — not the least of which the school happens to be ground zero in the nation’s debate about the merits of using race-conscious affirmative action in admissions because of the Fisher v. University of Texas U.S. Supreme Court case.

But the class visit is also the type of thing that experts say colleges and universities should do more of to give prospective students a more authentic experience as opposed to just presenting them with brochures filled with pictures of happy-looking students.

Experts also say now — amid the spirited discussions and debates about race, privilege and inequality on campus — is a good time for admission and enrollment professionals to collaborate to develop new ways to engage students around issues of diversity and inclusion.

“These are certainly shifting and volatile times on campus, with issues regarding diversity and inclusion front and center,” said Jennifer Desjarlais, a consultant in the education practice of the executive search firm Witt/Kieffer, as well as a co-leader of the firm’s enrollment management practice.

“However, change can spell opportunity,” Desjarlais said. “For admissions and enrollment professionals and leaders, it is a chance to review and reconsider standard approaches, practices, and policies — in discussion with the president, colleagues in leadership roles across different departments, campus representatives, and especially students — then realign them according to institutional priorities.

“Institutions are looking for leaders and staff who embrace current challenges,” Desjarlais said.

At Pomona College, an admissions administrator said the admissions office has begun to focus on giving students a clearer sense of what campus life entails.

“We’ve actually shifted our program significantly to, how do we make sure that students get an accurate portrayal of what this college is going to be like when they come, so they don’t feel like we lied to them about the experience,” explained Ashley Pallie, associate dean of admissions at Pomona College.

“That’s an active conversation,” Pallie said. “We have to talk to our current students and say, ‘Hey, you can’t be protesting the night before and then show up on a panel and say everything is good because you want to make sure there’s representation of you on this campus.”

Instead, current students should be encouraged to tell prospective students “what it’s like to be here.”

“Tell them in a hopeful way, like you would still want to be at this place, but it takes work,” Pallie said.

At the same time, Pallie said it’s important to support students once they are enrolled on campus, not just focus on getting them to enroll.

With regard to such, Pallie pointed to a “cohort” program in which students from underrepresented groups and who are studying math and science enter the college as a group.

The cohorts share a faculty mentor and take the same courses together during the first year.

“And that’s been particularly powerful,” Pallie said. “It’s not a program where we say like, ‘Oh, these student need additional help.’ It’s not like there’s something wrong with them.

“It’s like, ‘No, there’s something about being able to be around people who are like you who you feel comfortable with.’”

If there are no cohort programs or similar initiatives on campus for students from underrepresented backgrounds, admissions officers should not shy away from creating one.

That’s what Quinton McArthur, associate director of admissions and director of diversity and targeted outreach at Massachusetts Institute of Technology, did several years ago when he helped develop √mathroots — a two-week mathematical “talent accelerator” summer program for “high-potential” high school students from underrepresented backgrounds. Some but not all of the program participants have gone on to MIT.

“Essentially it’s an opportunity to introduce high-achieving Black and Latino students to competition math because one of the areas that there is significant underrepresentation at the high school level is in this competition math community,” McArthur said.

“There’s a pipeline of students here in America who are plugged into this opportunity and taking advantage of it, and the vast majority of those students are our Caucasian and Asian young brothers and sisters, and that’s great, that’s fantastic that they’re involved,” he said of competition math in general.

“But we’re just trying to open up the doors and trying to identify more Black and Latino students who would enjoy and benefit from this experience.”

Desjarlais said admissions officers can play a unique role in having an impact on issues of diversity and inclusion on campus.

“Enrollment management and admission officers have a unique perspective on many facets of an institution and are working more directly with their presidents, heads of student affairs, chief financial officers, and many others,” Desjarlais said. “They also have a clear picture of what’s happening off campus as well.

“They are students of and experts on changing demographics and diversifying communities, and can help their institutions change with society,” Desjarlais said.

“Admission and enrollment leaders help their institutions to see beyond themselves.”

A version of this story originally appeared in The Journal of College Admission Number 235/Spring 2017. Jamaal Abdul-Alim can be reached at jabdul-alim@diverseeducation.com or follow him on Twitter @dcwriter360.