Here’s a word of caution.

When a politician uses the word “free,” have your hand on your wallet and one foot out the door.

Because, free — aka, gratis, cost you nothing, nada — doesn’t always mean free, especially when it comes to college. 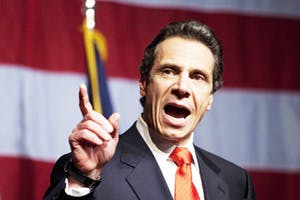 It’s not like the fine print on an airline ticket that essentially gives up many of your rights. Still, no one will drag you through the halls of academia, unless you’re protesting a right-wing provocateur.

So buyer beware, there’s a caveat worth a capital-C here. The fine print for Cuomo’s Excelsior Scholarship program reveals a free-tuition plan that definitely comes with strings attached.

Not if you’re poor and really need help.

Chances are, if you’re a student already receiving financial aid, the Excelsior plan actually gives you less money than you might expect. Excelsior is the “Hamburger Helper” of scholarship plans that will be added to any existing financial package. You may be already up to your allowable cap.

The biggest beneficiaries stand to be those from middle-class families making closer to the annual income limit of $100,000, rising to $125,000 in 2019. That’s not rich by any means. But these are the folks often short-shifted in aid packages. Consider the teacher/retail worker family combo that often don’t get what they need. For them, it’s Excelsior to the rescue.

For others, it may not be the boon they expect.

Who are the others? How about the child of a single parent working retail. The child’s gifted. The mother makes $40,000 a year. The child may get other benefits from existing programs. To the degree they already get benefits, Excelsior won’t help them at all.

But consider this last minute add to the plan, the big string.

If you leave the program within four years of graduating, any subsidies received become loans, and suddenly free is no longer free.

At first, it sounds reasonable. Stay and be a tax payer, living and working in New York. Or else.

But what if a job is available in California? Or if one wishes to follow love, or whatever, to wherever?

Where’s the advantage when the loan has fewer protections than the federal student loans the student would have used in the first place?

There are ways to make college free. You simply open the doors and give subsidies in funds so institutions can apply them as needed in a system where public schools go from K-12 to K-16.

But that would be considered too idealistic and way too radical a concept. Like Medicare-for-all.

Instead, of that easy solution, as is typical in public policy, we have to go from steak to sausage by codifying it the Cuomo way, adding some filler, and some ground-in catches.

And then we end up with something that looks and sounds better than it really is, and practically Orwellian.

Emil Guillermo is a journalist and commentator who writes for the civil rights organization, AALDEF at http://www.aaldef.org/blog.