Everyone likes a comeback story, and Sweet Briar College’s is particularly heartwarming. Yet the story is not over, even as the college prepares to begin a new chapter in its 116-year history with the arrival of its 12th president, Dr. Meredith Woo.

Woo comes to Sweet Briar by way of London, where she was the director of the International Higher Education Support Program at the Open Society Foundation from 2015 to 2017. Prior to that, she was the dean of the College and Graduate School of Arts and Sciences at the University of Virginia (UVA) from 2008 to 2014. 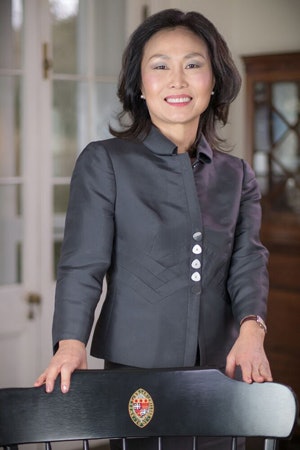 Given her relative proximity to Sweet Briar during her years at UVA — the two schools are located about an hour apart in the hills of rural Virginia — Woo knew of the institution and was surprised when news broke that the school might close.

“I was thunderstruck when there was the near-closure experience,” Woo says. I very deeply admired the way that the alumnae and other stakeholders in the college conducted themselves to save the college.”

Woo grew up in Seoul, South Korea, and moved to Japan when she was 14. She came to the United States to attend Bowdoin College and earned a master’s in international a­ airs affairs and a doctorate in political science from Columbia University.

Woo notes that, although South Korea’s economy today is one of the most competitive in the world, it was not so at the close of the Korean War. After the conflict ended, South Korea transformed from a developing nation to a developed one within a generation — a metamorphosis brought about in part by widespread enrollment in higher education. The end result of that investment in education was that the country “compacted into 50 years something like four centuries of economic advancement in the West,” Woo says.

As Woo was growing up, her parents hosted relatives who came to the capital from the provinces to pursue postsecondary degrees. One aunt studied music education; an uncle studied engineering; and another uncle had found his calling in Germanic literature.

“I’ve seen the incredible impact that higher education in Seoul had on people and their opportunities, and how it transformed them as human beings,” Woo says. “I think that in my mind, choosing higher ed wasn’t a career choice, but was instead something that I thought was fundamentally critical.”

As she prepares to step into her new role as president on May 15, Woo will arrive at a college that has made a remarkable recovery in a short time but still has challenges to overcome.

Many were astounded when Sweet Briar’s then-president abruptly announced in March 2015 that the college would close in the fall after sailing smoothly along for more than a century. Under the terms of the closure, current students would not be allowed to matriculate, and faculty were advised to seek positions elsewhere.

According to reports, the board of trustees believed that, as an all-women’s college, the institution would not be able to survive an increasingly competitive higher education landscape and that it was only a matter of time before the college would be unable to sustain itself financially. To stave o­ff what the board believed would be inevitable disaster down the road, they decided to preemptively close up shop.

Outsiders were puzzled. At the time, the college had an endowment of approximately $85 million, a sprawling campus renowned for its beauty, an outstanding faculty and a remarkably passionate and committed alumnae base.

As it turns out, out of all of Sweet Briar’s resources, it was the human element that proved to be most essential to keeping the college’s doors open. Deciding that they would not acquiesce to the board’s decision, alumnae — with support from faculty and current students — initiated a legal battle and an aggressive fundraising campaign to save the college.

“We have really redefined how colleges raise funds,” Teresa Tomlinson, chair of Sweet Briar’s board of directors and mayor of Columbus, Georgia, says. “I think the story of Sweet Briar shows that a lot of institutions are leaving resources on the bench.”

In the end, the decision came right down to the wire. The judge did not hand down a settlement decision until mid-June of 2015, by which point, many faculty members had accepted jobs elsewhere and students had scattered to the winds.

Phillip C. Stone, who was chosen by the courts to take on leadership of the college in the immediate aftermath of the legal battle, says that little could have prepared him for the experience of arriving on campus in early July 2015. All the faculty and sta­ff had been dismissed, and the campus was largely deserted. Stone’s first steps were to persuade faculty to return, assess how many students might be coming back in the fall and sort out other logistical details.

“[Sweet Briar’s former leadership] had written to the appropriate agencies — like the Department of Education; the accrediting association SACS; our athletic conferences; all those consortia and conferences — to say that we were closing, so there was an immediate need to call them quickly and say, ‘No, no, we’re not closing,’” Stone says.

As the former chair of Sweet Briar’s accrediting agency, the Southern Association of Colleges and Schools (SACS), Stone knew of Sweet Briar and never suspected that there would be an attempt to close it. Stone, a native Virginian, is credited with turning around the fortunes of Bridgewater College, a private school in the Shenandoah Valley, during his 10-year tenure as president there.

He says that Sweet Briar embodies many strengths.

“As a person who deeply believes in liberal arts education and wishes we had more of it, not less, I was devoted to trying to save Sweet Briar,” he says. “And I believe in small residential colleges, so this was exactly the kind of thing I fought hard for [ever] since I was in higher education.”

A­fter two years of battling to put Sweet Briar on level footing, Stone says that he is ready to go back into retirement. He and his wife have a home in Germany, which he would like to have more time to visit, and he will devote time to the Lincoln Society of Virginia, an organization he founded to commemorate President Abraham Lincoln’s historic connections to the Shenandoah Valley.

But he is confident that he is leaving the college in good hands with Woo. “For any number of reasons, I think she is going to be a great president,” he says.

Woo’s leadership credentials are impressive. As dean at UVA, Woo oversaw 11,000 undergraduate students, 1,600 graduate students and 800 full-time faculty. In her work for the Open Society Foundation, Woo traveled the world promoting higher education for refugees in the Middle East, South Asia and Africa. She also created and supported liberal arts colleges in the former Soviet bloc, including the embattled Central European University in Hungary.

Woo is taking leadership of Sweet Briar with a clear-eyed view of what lies ahead. “The challenges are particularly severe because the way that the school closure was announced happened in perhaps the most unfortunate way possible,” she notes.

To be financially sustainable, the college needs an enrollment of approximately 800 students, which means bringing in 200 new students each year. Last fall, the school fell short of that mark, with 160 new students, bringing the current enrollment to 329 students, excluding students who are currently studying abroad.

Nevertheless, many point out that this is a remarkable achievement for an institution that began the fall 2015 term with 25 new students in the class of 2019.

“In terms of how well we are doing, I’m looking at the baseline on which one started two years ago,” Woo says. “The baseline was nothing. The baseline was from scratch. I think it’s quite amazing how within two years they’ve gotten to where they are.”

As Sweet Briar works to get back to equilibrium, there is also the question of Sweet Briar’s identity as a women’s college to resolve — an identity that has radically changed since the 1960s and 1970s, when women’s colleges were the primary providers of higher education to women, Woo says.

“When I talk to students at Sweet Briar, there are of course students who came to the school because it’s a women’s college, but there are many who chose to come not because they were thinking about whether they want to go to co-ed or single sex schools, but because they liked what they saw,” Woo says.

Today, the majority of students attending colleges nationwide are female. So the mission of women’s colleges is no longer to provide access to education to a disenfranchised group, but rather to define themselves by the quality of education that they provide.

Tomlinson, who chaired the presidential search committee, says that when the committee was looking for Stone’s replacement they knew they wanted someone who would not be afraid of innovation. She believes that they have found that person in Woo.

“A lot of higher education institutions like the status quo,” Tomlinson says. “If they want change, they want pretty modest, comfortable change. I’m not trying to suggest recklessness. Certainly nobody is interested in that. But we are interested in remaking women’s education for today’s world.”

That was what the war to win Sweet Briar back from its former leadership was all about, Tomlinson adds.

“The prior leadership didn’t think that women’s education was relevant in the world today,” she says. “Meredith does, and she also has some very strong opinions about how you can remake women’s education, liberal arts education, in this new era and make it a very valuable commodity.’