How time flies. Watching Cynthia Diaz at this year’s Centro Guerrero convocation at the University of Arizona brought back memories of when I first saw her. I did not actually meet her at the time. I first saw her on an “I miss my mom” poster when she was 15 and fighting in Phoenix to bring her mother back from Mexico as she had been inhumanely deported (whisked away from her home under false pretenses at the crack of dawn) by the migra that year. 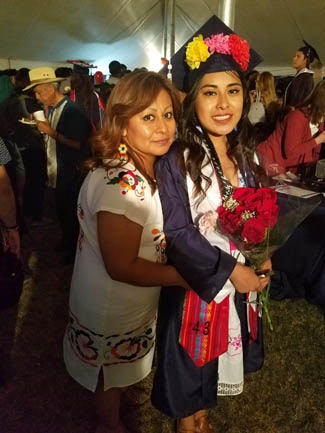 Maria Rodriguez celebrates with her daughter Cynthia Diaz at graduation.

The next time I saw her was at UA. She told me that a mutual friend had sent her my way. This was the fall of 2013. At the time, she still looked the same age as the young girl in the poster.

I had lunch with her the other day to celebrate her graduation. We were reminiscing about that first year. However, I should go back two years before that to better contextualize the significance of this convocation and Cynthia’s graduation.

It was the 2011 convocation and it was the only year that the Raza Studies faculty were unable able to attend. By coincidence, the 2011 Chicano convocation took place one day after the anti-Ethnic Studies HB 2281 legislation had been signed (will never be recognized as a law) by Gov. Jan Brewer. That’s why we were unable to attend. Middle and high school students held an unprecedented walkout and protest that day at TUSD headquarters.

It erupted because the inspiration for that legislation, then state schools’ superintendent, Tom Horne, had decided to come to Tucson to gloat over this development, home of TUSD’s Raza Studies, the target of that legislation. Most of my colleagues were also part of that action, which went from there to the state building, with two of us (out of 15) getting arrested in the process of a student-led building takeover and sit-in.

I recall that, because as the faculty advisor for the student organization MEChA, one of the great memories I have of Cynthia at the UA, is that after one of the MEChA meetings, we were both going to a meeting regarding Operation Streamline. However, while on the way, we received a phone call regarding two workers who had been arrested in South Tucson and were being turned over to the migra. By the time we arrived, there were a couple dozen people and more were arriving fast. At that point, the decision was made to surround and prevent the immigration vehicle from leaving, the one with the two workers in it. Without hesitation, Cynthia became part of the first group to encircle the vehicle. Because I previously had been arrested, I hesitated, but after witnessing Cynthia’s decisiveness, I followed suit.

That night was amazing. Several hundred people ended up showing up and blocked the several dozen police and immigration vehicles present. Several more people were arrested, plus a dozen people were maced at this spontaneous 3-hour rebellion. I walked away that day in awe of Cynthia’s fearlessness.

That’s the Cynthia that I came to know, a once-in-a lifetime student and a human rights activist, consistently putting her body on the line for her beliefs. And at the same time, while she had come from Phoenix, many young Tucson students had for years, also exhibited that same fearlessness. She was of that same mold.

Part of Cynthia’s story is that beyond waging a media campaign of several years, she went to Washington, D.C., where she fasted in front of the White House to get her mom released. And she did so successfully.

All that took place just in her first year at UA, and her struggle is what shaped her to become the great student leader and respected human rights activist that she has become. After graduation, she has several options. One of them is possibly enrolling at the teachers college in Ayotzinapa, Guerrero, the school where 43 students were disappeared and presumably killed in 2015.

Speaking to her, I thought about convocations: “I want to thank…” In Cynthia’s case, of course, she thanked and thanks her mother, who today is herself a respected human rights activist. Incidentally, her case was resolved affirmatively this December. But this year, it is Cynthia herself who should be thanked. She also went on to become one of the student leaders who organized the highly successful MEChA national conference at the UA in 2016, a huge honor for any college campus.

Here, I have only scratched at her human rights work. But this is what makes me think about convocations. There are actually many heroic students like her: a life story or life stories reduced to a few written sentences. That’s not necessarily bad news. There was a time when graduations for students of color, LGBT and immigrant students, involved only a handful of students… I’m remembering the 1st Raza graduation at UCLA in 1973. While such convocations are now huge, perhaps in the future, each student can have their story honored by being recorded and stored and made available on a campus website?

I asked Cynthia if she did have some words for other graduates, what would they be? She responded: “Take your knowledge and apply it. This is the meaning of ‘education with a responsibility.’”

Actually, if one googles that, one will invariably find Cynthia’s photograph underneath that idea of education with responsibility. Her footprints also tell us as much.