The Department of Education announced Friday that it would offer a contract to a single servicer to administer federal student loans. Currently, ED contracts with four different servicers to manage its $1.2 trillion student loan portfolio. 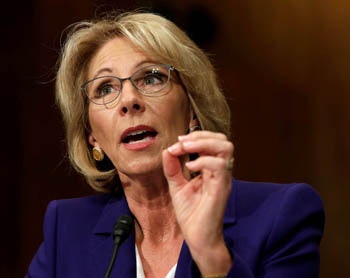 ED released an amended contract solicitation for that future provider on Friday afternoon. “The amendment ensures high quality customer service, maintains all meaningful borrower protections, increases oversight and provides significant savings to tax payers,” James Manning, acting under secretary of education, said in a call with the press on Friday.

In April, ED Secretary Betsy DeVos rescinded Obama-era memos pertaining to the contract solicitation that were designed to curtail borrower defaults. Borrowers defaulting on students loans has become a serious issue in recent years. More than 40 percent of borrowers from the main student loan program were either not making payments or were behind on payments in 2016 — a group that owes a cumulative total of $200 billion.

DeVos’ move garnered pushback from many quarters and prompted a coalition of 21 attorneys general to sign a letter questioning ED’s decision. “At a time when the need for common-sense federal loan servicing reforms is undeniable, the Department’s decision to roll back essential protections imperils millions of student loan borrowers and families,” the AGs wrote.

Under the terms of the amended contract solicitation, the loan servicer will no longer be required to provide information in Spanish or online calculators to help borrowers determine their pre-payment amounts. In addition, requirements around contacting borrowers to rectify income driven repayment plans and the frequency of contact with delinquent borrowers have been removed.

“Some of the things that are being stripped out here are definitely ways to save money in the system,” Colleen Campbell, associate director for postsecondary education at the Center for American Progress, said on Friday. “The question becomes then what’s the tradeoff between saving money and making things efficient and easy for borrowers. If we’re saving money by not providing things that will ultimately save students money, then I don’t think we’re doing a good job as a system in terms of protecting students who are borrowing federal money.”

DeVos defended the decision to pull back the memos in a statement on Friday afternoon. “In order to ensure the best outcome for federal student loan borrowers, it was necessary to rescind the previous guidance to free the Department to craft a solution that was more responsive to the needs of both customers and taxpayers,” she said.

According to DeVos, the changes will save taxpayers more than $130 million over the next five years. Manning reiterated on Friday that undoing the memos was a necessary step in creating the streamlined, less costly amended contract solicitation.

“Only by rescinding these memos has the Department been able to implement an amendment that achieves the goal of protecting borrowers at a lower cost to taxpayers,” Manning said.

The Consumer Financial Protection Bureau, which joined the Department of the Treasury and ED in streamlining the way student loans were administered during the Obama administration, declined to comment on the new amended contract solicitation.