This summer, Bloomsburg University of Pennsylvania will roll out a program designed to encourage more students from the foster care system to attend college. The Anchor Program will be available to foster youth attending high schools in five counties surrounding Bloomsburg, which is located in rural central Pennsylvania. 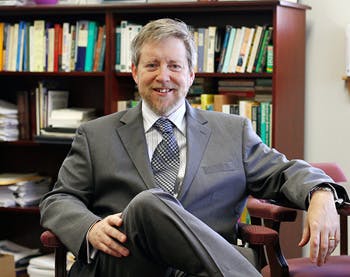 Dr. James Brown is dean of the College of Liberal Arts at Bloomsburg University.

Alumni of the foster care system have a small chance at enrolling in and completing college, statistically speaking. According to the best available estimates, approximately 14 percent of all youth who go through the foster system will ever complete a college degree. Other studies put that number as low as 3 percent.

The reasons for this disparity are many and varied, but often come down to the simple fact that many foster youth face an uphill battle when it comes to college enrollment. Once they turn 18, they “age out” of the system in many states, although some states have instituted policies that allow them to remain engaged with the foster care system for a few more years.

As a result, they lose the supports they had through high school. Going forward, they lack the sort of financial and emotional supports during college that other students might receive from their families. Some states, such as California, offer scholarships for students who have experienced the foster care system, but such supports are not evenly distributed across the country.

Through participating in the Anchor Program, Bloomsburg officials hope that local foster youth will begin to see college as an option. The programming will involve a stay at the college over the summer, in which programming, housing, and meals will be provided to the students. Over the winter, Anchor Program participants will stay in touch with mentors at Bloomsburg.

“We want to simulate the college experience for a week to get them interested in what Bloomsburg has to offer, to think about what college life entails, and to start to see themselves as potential college students,” said Rona Anderson, assistant to the Dean of the College of Liberal Arts at Bloomsburg.

Officials at the college began considering ways to serve foster youth in surrounding counties earlier this year, after the beginning of the university’s first semester with the Second Chance Pell program, which just wrapped up this spring.

Second Chance Pell is a Department of Education pilot program that provides Pell grant dollars to 12,000 prisoners to attend classes provided by local institutions of higher learning. Colleges and universities, such as Bloomsburg, are currently offering on-site instruction at correctional facilities or online classes to prisoners who are close to finishing out their sentences.

The program is intended to reduce recidivism rates, which are quite high in the United States. According to a 2016 study from the United States Sentencing Commission, nearly half of federal offenders were rearrested within eight years of being released.

Once Second Chance Pell was underway at Bloomsburg, the university began thinking of other ways to improve quality of life in local communities, according to Dr. James Brown, dean of the College of Liberal Arts.

“We really started thinking about where we as a public university can do the most good serving our community – not just educating our students but actually helping make our communities safer and more prosperous,” Brown said.

“Some of them have even gotten involved in the planning process,” Anderson said. “So we’re very fortunate to have an informed development of the program on many levels – from the county, to students coming out of foster care — such that we can really develop a program that will be enticing to youth currently in the system.”

If the students who participate in the Anchor Program later choose to attend Bloomsburg, they will have the option of living on campus year-round during summer and winter break. That means they would not have to worry about finding a place to stay while their peers go home to their families.

“We want them to be successful, but we’re really going to measure the success of this program by the life success of these students, however they choose to define it,” Brown said.