Education Champion Out to Conquer Disparity

After the bitter presidential election of 2016, then-U.S. Secretary of Education John B. King Jr. says he found himself in search of a position where he could help young students who face difficult circumstances like he did growing up as an orphaned child in Brooklyn.

“For me the goal was, ‘Where can I find a place where I can continue to work to expand educational opportunity for kids like me, kids for whom school is the difference in their lives,’” King told Diverse in a recent interview in his Washington office. 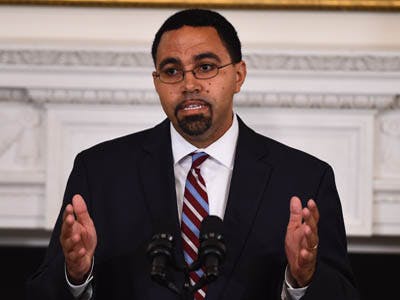 King found such a place at the Education Trust, a District of Columbia-based nonprofit begun in the 1990s to tackle issues of educational disparity for students from low-income families and students of color. The organization hired him as its second president earlier this year.

“It’s just a perfect match between the mission of the organization and the things I care about,” King said. “I also feel like this is a moment when we need strong voices on behalf of equity in our society.”

“We certainly have strong voices that I think are trying to undermine equity in our society,” he added, in reference to recent efforts by the Trump administration to reduce federal financial aid for college students, among other things.

“I want to be part of a movement to insist that we have equality of opportunity,” King said.

“John, first and foremost, shares the same passion that I do and, frankly, that everybody at Ed Trust does about the organization’s mission, which from the get-go is focused on increasing the education of low-income kids and kids of color,” Haycock explained. “This is his life story. This is his life’s passion. And so, more than anything else, that’s what’s number one.”

King also has had a wealth of educational policy experience that will serve him well in the position, Haycock added.

“He’s had so many different vantage points, as a classroom teacher, school principal, charter management organization head, state leader and national leader,” she said. “He gets more than most people do. He’s sort of a born movement builder.”

King gets praise even from his critics, such as Frederick Hess, resident scholar and director of education policy studies at the American Enterprise Institute, a conservative think tank, who says King “brings great passion and commitment to his work in education.”

“I questioned some of the decisions he made as secretary and how he approached his role, but I never doubted his desire to do the right thing and always had the highest regard for him as a person,” said Hess, who has accused King of being intent on “trampling” on federal education law by trying to get school districts and states to spend roughly the same amounts of money — teachers’ salaries included — in schools irrespective of whether they were Title I schools or not.

King — who ultimately abandoned the unpopular plan during his final days as education secretary — spoke with Diverse in his new office digs at the Education Trust, located in a seventh-floor suite in downtown D.C.

His bookcase is lined with photographs that include himself, his wife and two daughters standing alongside President Barack Obama in the Oval Office; a series of awards, such as the Eugene M. Lang Lifetime Achievement Award from the “I Have A Dream” Foundation; and books with titles that range from “Emancipating Lincoln” and “The New Jim Crow” to “Representing the Race: The Creation of the Civil Rights Lawyer.”

For King, a 2007 graduate of Yale Law School, talk of getting rid of the U.S. Department of Education — an idea that has gained some attention in Congress and in policy circles and has even been expressed by King’s successor, Betsy DeVos — is wrongheaded and would undermine protections for vulnerable groups.

“There’s this whole conversation throughout American history about states’ rights versus the federal role, and from my perspective, our history has been that the federal government has a critical role to play to make sure that the most vulnerable are protected.”

King noted that the department is charged with making sure that districts serve students with disabilities, English learners, low-income students and students of color as well as protecting LGBTQ students.

For King, diversity in higher education and in the workplace are enduring goals. He believes affirmative action as the means to diversity still has a place in society.

“From my experience, the rationale that is most compelling to me is a diversity rationale, and I don’t think that’s time-limited,” King says. “There’s an emerging body of evidence — both in an education context and a business context — that diverse classrooms and teams produce better outcomes.

“Similarly for business, diverse teams make better decisions on average,” King said. “Diverse teams provide real advantages in terms of business outcomes. And so I would say employers should always be thinking about how they will ensure diversity.”

Recently, King has been watching with dismay as the administration of President Donald J. Trump and his secretary of education — Betsy DeVos — undo many of the policy initiatives that King and his predecessor, Arne Duncan, put in place under the Obama administration. It has not been an easy thing for King to stomach.

The new administration has also postponed enforcement of the gainful employment regulation meant to hold for-profit colleges more accountable for the career outcomes of their graduates.

“That’s gonna have dire consequences for students that will disproportionately affect low-income students and students of color,” King predicted.

“Part of what I think we’re seeing is folks putting profits ahead of students, and so we work very hard to try to make sure that higher ed institutions serve students well, that there are real consequences when bad actor institutions take advantage of students, and the signals seem to be that they’re going to put the interests of those bad actor, for-profit institutions, some of the (loan) servicers that have engaged in misconduct, they’re going to put their interests ahead of the student interests.”

King said the Trump administration’s decision to revoke federal guidelines that give transgender students the right to use public restrooms that match their identity was “wrong and cruel.”

Although he no longer has a role in implementing federal policy or control of federal purse strings, King remains focused on being influential in the realm of education policy.

“Our job I think is to try to call out practices that are working, try to push states to adopt those practices and make sure that folks don’t sort of assume that because students are low-income or students of color that students can’t make progress, and that’s as true in K-12 as it is in higher ed,” King said.

“That was the point of our Black Student Success Report, to say that there are real differences in institutional outcomes because of institutional behaviors,” King said in reference to a March 2017 report from the Education Trust that identified the top- and bottom-performing institutions of higher education for Black students.

Though King is no longer in federal government, he is still in political mode.

For instance, when asked about a report that the Education Department released at the tail-end of the Obama administration that found School Improvement Grants awarded during the Obama administration had little to no effect on student learning — something Republicans and conservatives have seized on as ammunition in their arguments against federal investments in education — King questioned the methodology of the study.

“It’s hard to generalize a program that was administered very differently in 50 states and then administered differently district to district,” King says. “I think the better question to ask would be where are the places that used School Improvement Grants effectively, and where are the places that didn’t, and what are the differences between them?”

He also credited the Obama administration with cutting nearly in half the number of “dropout factories,” saying “that, too, is a product in part of the focus the administration put on improving performance at the lowest performing schools.”

Hess, of AEI, said King has a balancing act to perform and should “avoid the temptation to use his perch at the Ed Trust to debate the Obama legacy or critique the Trump administration.”

“At the Education Trust, he takes the helm of an organization that has been an influential and proudly nonpartisan voice,” Hess said. “I think those two things — its influence and nonpartisanship — go together.

“That kind of leadership is especially important today, at a time where broader divides are now evident in education.”

But King shows no signs of letting up on the Trump administration.

In a recent press release about the Trump administration’s proposed education budget — which seeks to slash federal student aid and downsize the Education Department by $9.2 billion — King put out a statement calling the budget “an assault on the American Dream.”

“This shortsighted and cruel proposal would make the climb to success much steeper for all our young people, especially students of color and students from low-income families,” King’s statement said.

“Instead of investing in the future, the proposal underfunds or eliminates many vital supports that give people the opportunities and tools to better their lives.”