WASHINGTON — The U.S. Department of Education drew both scorn and praise Monday at a public hearing on its plans to revamp two Obama-era rules meant to protect students from shady schools that leave them saddled with debt and no viable way to pay it off. 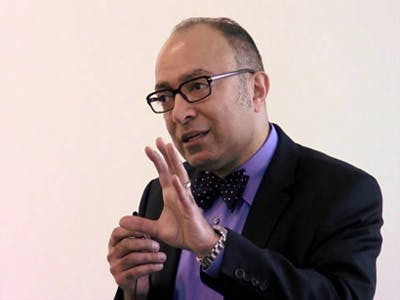 Barmak Nassirian is director of federal policy for the American Association of State Colleges and Universities.

“We condemn the department’s decision to delay both rules together,” Joanna Darcus, an attorney at the National Consumer Law Center, stated at the hearing. “These rules provided critical protections to students and student loan borrowers who are ensnared by deceptive practices and false promises.”

Some advocates took aim at the for-profit colleges’ use of the word “pause,” which was a common refrain at Monday’s hearing on the department’s decision to postpone enforcement of the gainful employment and borrower defense rules.

“Students, veterans, and taxpayers have waited far too long already for these critical protections from unmanageable student debt, sudden school closures, and waste, fraud, and abuse in higher education,” said Jennifer Wang, director of the D.C. office for The Institute for College Access & Success, or TICAS. “They cannot afford a ‘pause’ in the Education Department’s progress against fraud and waste.”

And they called for the gainful employment and borrower defense rules to either be applied across the board to all colleges and universities or for the rules to be scrapped altogether.

“I think most of the speakers who have been speaking on behalf of borrowers have been conflating some behavior at institutions with outcomes,” said Marc Jerome, president of Monroe College, a career college in The Bronx.

Jerome — who identified himself as a member of the 2013 gainful employment negotiated rule-making committee — said the Education Department should stay focused on the data going forward. He said the “silence is deafening” when it comes to the issue of why gainful employment metrics aren’t applied to all sectors of higher education.

“When you look at data across all of higher education, outcomes for low-income students — whether its graduation rates, or student debt or earnings — are generally abysmal,” Jerome said. “And what’s happened is the focus on one particular subset of colleges has caused both the entire journalistic community and some of the regulatory community to forget that the department has responsibility for protecting all students.

“If the rules were applied across all sectors, there would be thousands of program closures and many institutional closures,” Jerome said.

Under the Department of Education’s gainful employment regulation — which applies to most for-profit programs and certificate programs at private non-profit and public institutions — a program is considered to lead to “gainful employment” if the estimated annual loan payment of a typical graduate is less than 20 percent of his or her discretionary income or 8 percent of his or her total earnings. Programs that exceed these levels could lose their ability to participate in taxpayer-funded federal student aid programs, according to the Education Department.

Under the Borrower Defense rule, student borrowers could be eligible for repayment forgiveness of the federal student loans they took out if they used the money to attend a school that misled the student or engaged in other misconduct in violation of certain state laws, according to the department.

U.S. Secretary of Education Betsy DeVos last month delayed enforcement of the gainful employment rule, citing a pending court case on the matter. She also delayed the borrower defense rule, which would have taken effect July 1, calling it a “muddled process that’s unfair to students and schools, and puts taxpayers on the hook for significant costs.”

Advocates at Monday’s hearing noted how the borrower defense rule would have protected students from signing “forced arbitration” agreements or waiving their rights to join class action lawsuits against institutions they believe defrauded them.

Some speakers said both the gainful employment and borrower defense rules should be allowed to stand as they are for the time being, not only for the benefit of student borrowers but for the for-profit college sector itself.

“There is ample evidence that in partially addressing the most toxic programs and the worst practices within that sector, these rules were gradually restoring a measure of consumer confidence in the sector, which will now suffer an additional two years of uncertainty and lack of public trust as the new regulatory process unfolds,” said Barmak Nassirian, director of federal policy for the American Association of State Colleges and Universities, or AASCU. He said the new rules would “take time to develop” and would be unlikely to go into effect until July 2019.

Some proprietary college representatives say the gainful employment rule unfairly punishes them for the actions of their students.

Cosmetology schools should not be subject to the gainful employment rule in its current form, according to

Gary Ratner, owner of the Ratner Companies, which operates 1000 salons and owns three cosmetology schools in Florida and Virginia. “If cosmetology schools are included, it is my belief that the department should do a better job of addressing the unique realities of the cosmetology business,” Ratner said, noting that many cosmetologists work in smaller chains or independent salons and are paid in cash.

“And those who are paid in cash are known to underreport their income,” Rather said. “That’s a reality. It’s not right but it is also not fair to cosmetology schools to be held accountable for the underreported income of their graduates.”

“Veterans are often singled out and targeted for deceptive, fraudulent and predatory college recruiting practices,” said John Kamin, assistant director of the veterans employment and education division of The American Legion, a veterans association.

He said the Department of Education has a duty to protect America’s service members and veterans from “programs that leave them deep in debt with worthless degrees that do not lead to gainful employment.” Institutional disclosure requirements under the gainful employment rule would help achieve that end, he said. Kamin also argued for veterans to be represented on any new negotiated rule-making committees established by the Department of Education.

William Hubbard, vice president of government affairs for Student Veterans of America, said veterans “express anger when they discover that the government knew a career education program had a bad record but allowed them to waste valuable GI benefits at such a school.”

He also dismissed the notion that the previous rule-making led to a “muddled process” — a description that he said “deserves open scorn for its sheer ignorance.”