College is about to become less affordable for low-income students. Protection of civil rights on campus is about to be scaled back. For-profit colleges are about to rob students blind and raid the federal trough.

As the administration of President Donald J. Trump reaches the six-month mark, some critical observers say those looming scenarios have all become closer to reality under the leadership of Trump’s education secretary, Betsy DeVos. 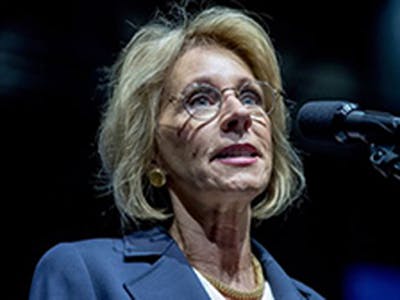 “In the context of affordability, access, and quality, this administration has taken a backward step,” said Tariq Habash, policy associate at The Century Foundation, a nonpartisan think tank that “seeks to foster opportunity, reduce inequality, and promote security at home and abroad,” according to its website.

“Without question, the outlook for students and student loan borrowers has grown even more dire since Donald Trump took office,” agreed Charlotte Hancock, program director at Higher Ed, Not Debt, a campaign housed at the left-leaning Center for American Progress, a policy institute based in Washington, D.C.

And there’s no shortage of criticism that has been levied against the U.S. Department of Education’s Office of Civil Rights, which is currently being led by attorney Candice Jackson. Among other things, critics lament a recent memo from Jackson that seemed to suggest that the office no longer take a comprehensive look at civil rights violations when investigating a single civil rights complaint.

“Although the law remains unchanged, and the obligations of this Department of Education are the same as the obligations of the previous administration, the actions and rhetoric of Secretary Betsy DeVos and Acting Assistant Secretary Candice Jackson continue to suggest an abdication of their responsibilities as public servants in a civil rights agency,” said Liz King, director of education policy at The Leadership Conference on Civil and Human Rights.

King said the Office of Civil Rights has historically had a “measurably positive affect on the lives of students and families.”

“The Trump administration’s determination to reverse course and undermine the very infrastructure of civil rights enforcement is immoral and unjustifiable,” King said. “If allowed to proceed, the actions of this Office for Civil Rights will have long-lasting devastating effects.” Education Department officials have said the perceived narrower approach to civil rights investigations is meant to enable the department to handle more cases more efficiently.

Much of the criticism levied at DeVos has been directed at issues of access and affordability for low-income students.

He was referring to a guidance the department sent in March that rescinds a 2015 Obama administration guidance that stated debt collectors could not charge collection costs to a defaulted borrower who enters into a repayment agreement.

Indeed, the White House’s proposed budget for fiscal 2018 seeks to trim spending at the Education Department by $9 billion — a 13 percent reduction below the fiscal 2017 level. The White House proposal also seeks to take $4 billion from the surplus Pell grant fund.

Many of the cuts are to programs that help students pay for college, such as federal work-study and the federal Supplemental Educational Opportunity Grant. The department has said the SEOG grants are a “less well-targeted” way to help students than Pell grants, and that the work-study program should be reformed and limited to undergraduates who benefit most from the program. This is an assessment with which even critics of cuts to the program tend to agree.

Although Congress has proposed a budget with less severe cuts than the Trump White House, the White House education budget still sends a troubling message about its priorities, advocates say.

Dr. Tiffany Jones, director of the higher education team at The Education Trust, said while under the Obama administration there was a big focus on improving post-secondary educational outcomes,that focus has dissipated under Secretary DeVos and President Trump. The Education Trust is a research and advocacy organization that focuses on equity for low-income students and students of color,

“Where we thought we’d be fighting to improve those programs, in some ways we’re fighting to keep them,” Jones said, speaking in reference to various programs that the Trump administration has proposed to cut or eliminate.

“We continue to worry about the future of student loan borrowers, as Secretary DeVos considers handing the job of servicing federal loans to one company — a task now held by several companies, threatened with a monopoly,” said Hancock, of Higher Ed, Not Debt.

One of the most worrisome issues is DeVos’ decision to delay enforcement of the gainful employment and borrower defense rules as her department seeks to rewrite the rules.  The gainful employment rule sought to hold for-profit colleges and non-degree programs accountable for poor outcomes. The colleges and programs faced the loss of access to federal student aid if too many students graduated with too much debt and not enough income to pay it off.

“All these actions send a clear signal that the current administration is not interested in making college affordable,” Habash said.

Robert Shireman, senior fellow at The Century Foundation and a former deputy undersecretary in the Department of Education during the early years of President Barack Obama, expressed similar concerns. Shireman is considered the architect of the Obama administration’s gainful employment (GE) rule.

“Colleges have taken steps to eliminate or improve bad programs because of the GE rule,” Shireman said. “If the rule is scrapped or weakened, those improvements will be reversed and many for-profit colleges, in particular, will return to their old ways.”

Not everyone shares the view that DeVos has set things back for higher education. And some say it’s too early to say one way or another.

“There have been no policy changes of import yet,” said Frederick M. Hess, resident scholar and director of education policy studies at the conservative American Enterprise Institute.

“It’s still in the early months of the administration,” Hess said. “So I’d say that nothing of significance has yet changed.”

Regarding the Education Department’s plans to redo the gainful employment and borrower defense rules, Hess said both measures involved trade-offs.

“How much responsibility for certain loans should fall on taxpayers rather than students?” Hess said of the borrower defense rule. “Or how aggressively should Washington try to control access to certain postsecondary institutions,” he said of the gainful employment rule.

“The Obama administration had its views, which some of us regarded as insufficiently attentive to taxpayer concerns and overly confident that the government can responsibly and effectively regulate higher education,” Hess said.

“Now, the Trump administration is modifying those policies,” Hess continued. “Reasonable people will hold different views on all this. But it’s hard for me to square the vitriolic attacks on Trump’s policies with what is actually being proposed.”

“It is too soon to judge results,” agreed Steve Gunderson, president and CEO of Career Colleges and Universities, or CECU, the main lobbying group for the for-profit college industry.

“I strongly commend the Department for recognizing the current regulations were driven by an ideological agenda rather than a goal of creating public policy that really works,” Gunderson said. “My strong hope is the Department will step back, learn how the current rules do not work in the real world, and then constructively work to create sound public policy.”

“Obviously the very purpose of negotiated rule-making is to try and achieve consensus among different views,” Gunderson said.

But other experts say the gainful employment rule has already been proven as effective.

For instance, in a recent op-ed for The New York Times, Kevin Carey, director of the education policy program at New America, said the proof is in the fact that out of more than 500 programs that the Department of Education under President Obama identified as failing, about 300 of them have already been shut down by the colleges themselves.

Ben Miller, senior director for postsecondary education at the Center for American Progress, has suggested that — sooner or later — DeVos will need to “flip from reflexively trying to undo Obama-era actions to a proactive agenda.”

“At her confirmation hearing, DeVos mentioned the need to find solutions around accountability, student debt, and a host of issues,” Miller stated in a recent “midpoint report card” on DeVos. “Hitting the undo button repeatedly is only going to take her so far.”