While Congress was drumming up support last Friday for the American Hope Act — a bill to protect and end the threat to DACA (Deferred Action for Childhood Arrivals, aka DACA, or the Dream Act) — I was in Philadelphia meeting Cheska Mae Perez.

Perez isn’t a Latino name. She’s 19, a Filipino immigrant, whose example speaks to the power of DACA. 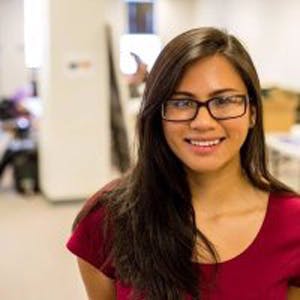 We were both among the six finalists at the Asian American Journalists Association’s first Story Slam, and her story caught my attention.

Perez is undocumented and not afraid to talk about it publicly.

“There’s nothing to hide,” said Perez, who came here with her parents on a legal visa that was not renewed when her family experienced a job loss. Understanding that has helped her overcome any fear or guilt about her status. Or any hesitation to talk about it. “There’s nothing to be guilty about,” Perez said. “It was not my fault. It was no one’s fault. We were stuck in a situation that became our reality. And that’s a lot of people’s reality as well.”

The silver lining in her situation? Perez will be starting college in August on a full ride at Franklin and Marshall College in Pennsylvania, where tuition is more than $60,000 a year.

But it’s only because she was a DACA recipient that she was eligible for a new partnership the school had with the Golden Door Scholars program.

Started by Red Ventures CEO Ric Elias in 2013, it began by giving scholarships to 11 DACA recipients in its first year.

This year, the incoming class of scholarship winners has grown to 66 recipients with Perez one of the lucky ones — DACA recipients all.

Overall, nearly 800,000 people have received DACA benefits and it’s not even everyone who is eligible to apply.

Fear keeps many people from coming forward, admitting they are here illegally and going through a required background check.

And now with Texas setting September 5 as a deadline before it proceeds with its legal challenge to DACA, there may be more reason to fear.

But not for Perez.

She remains hopeful and is actually encouraging more undocumented students to come forward.

“There are more resources available to you as a student if you’re DACA,” she said.

She’s her own best example.

In her research leading up to college, Perez found many other bureaucratic barriers to undocumented students, such as the inconsistent ways schools’ treat their applications. Some required her to file as an international student, where she would have to pay full tuition. Others allowed her to file a normal resident application.

But that wasn’t the biggest problem.

“I deferred college for two years because it took me two years to find resources,” Perez said. “I was admitted to many schools, but I didn’t enroll because of a lack of financial aid.”

Through it she found the Golden Door scholarships for herself, and it was at that program’s recent summit in South Carolina that she was able to meet with other scholars from past years, as well as mentors from Red Ventures who are committed to the success of the scholars.

Now just before her freshman year begins, Perez is planning to make the search program that helped her available to others.

“It was originally just for my younger sibling,” Perez said. “But I want to help my community, too.”

She sees it as a way of “giving back.” Stay tuned for its release.

It’s one undocumented student’s tale, but another example that the DREAMERS of DACA are for real.

“We are contributing members of society,” Perez said.

As for the AAJA story slam?

Perez didn’t finish among the top three for a cash prize, but she didn’t mind. She’s already won the biggest prize of her life so far, that full ride scholarship. And she’s still working on an amazing first chapter of her larger story, as she enters the golden doors of higher ed.

As the political arena starts heating up over DACA, anyone with doubts need only look at our undocumented resources like Perez.

Emil Guillermo is an award-winning journalist and commentator. He writes for the Asian American Legal Defense and Education Fund blog at http://www.aaldef.org/blog