Caylin Newton made his college football debut Saturday, leading Howard University to one of the biggest upsets in the sport’s history, 43-40 over UNLV. He ran for 190 yards and two touchdowns, along with passing for another 140 yards with a TD and interception. 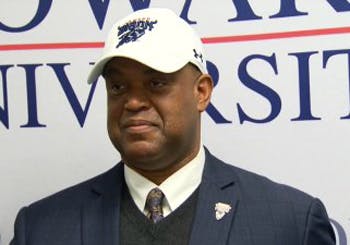 “He made a name for himself,” Howard coach Mike London said of his quarterback, younger brother of National Football League superstar Cam Newton. “Caylin did a good job of running the offense and made some fantastic runs, often with guys hanging on him.”

The Bison, a Football Championship Subdivision (FCS) school, were a 45-point underdog to the Rebels, a member of the NCAA’s top-tier Football Bowl Subdivision. According to Pregame.com, which supplies odds to The Associated Press, a $100 bet on Howard to win outright would have paid $55,000.

The previous largest upset was in 2007 when Stanford defeated USC as a 39-point underdog. That win also featured another first-year coach in Jim Harbaugh.

“We’re all ruled by the psychology of results. In terms of culture, perception and being competitive this is huge,” London told the AP in a phone interview. “To go on the road, cross country and play these guys toe to toe with their allotment of 80-plus scholarship guys and with my 57 plus is big.”

The pairing of London and Howard couldn’t come at a better time since both are looking for redemption. The Bison — who were picked ninth out of 11 teams in the preseason Mid-Eastern Athletic Conference (MEAC) poll, were 3-19 the past two seasons. They also have had only one winning season in 11 years (2012) and haven’t posted back-to-back winning seasons since 1998. Going into Saturday’s game in Las Vegas, they had lost by an average of 38 points in their past seven games against FCS teams.

They went 8-5 in 2011, including wins at Miami and Florida State, but couldn’t reach those same levels. London, who was the Atlantic Coast Conference Coach of the Year in 2011, was as assistant at Maryland last year before taking over at Howard.

“There have been a lot of people telling the program what they can’t do for a long time. We have been trying to instill a culture of all things being possible,” London said. “We were leading at halftime and the guys were resolute and committed to the game plan.”

Howard led 21-9 with less than six minutes remaining in the second quarter before UNLV scored 24 straight points. The Bison would eventually rally and take the lead for good on Caylin Newton’s 4-yard run with 7:34 remaining.

Running back Anthony Philyaw, who is the preseason Offensive Player of the Year in the MEAC, rushed for 71 yards and a pair of touchdowns.

The Bison don’t have much time to celebrate. They got back into Washington less than 12 hours after beating the Rebels and have to go on the road again next Saturday, this time to Kent State.

London said he had been up for 48 hours straight and was hoping the full magnitude of the win would set in after some sleep.

“To see guys looks in the locker room after the win really was overwhelming. Now we have to get back to work and fix some things,” he said. “We’ll put in the time to craft a game plan for Kent State after we get acclimated to being back on East coast time. We don’t have classes on Monday so that will be good.”