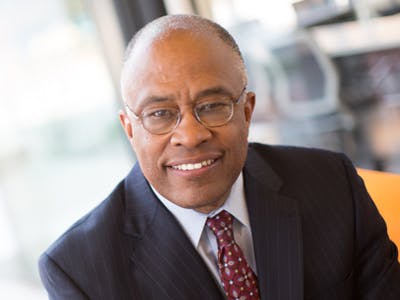 By Monday afternoon, dozens of students walked out of classes in scheduled protests, and a campus-wide petition asking for DeVos’ invitation to be rescinded reached nearly 3,000 signatures.

“This decision was not made in any way by the faculty, student government, or the student body as a whole,” the online petition says. “This is unacceptable. This is not what UB students want. The overwhelming majority of UB students and alumni, as well as the Baltimore community in general are appalled at this decision.”

Mariame Dangnokho, UB’s Student Government Association president, expressed agreement with the online petition stating that students should be involved in the decision process for selecting a commencement speaker. “The SGA stands in support of our students in asking that Secretary DeVos’s invitation is rescinded,” the statement said. “We demand that the graduating class of 2017, and those thereafter, have a voice in who is selected as their Commencement speaker.”

Keanuu Smith-Brown, vice president of the SGA, and other students said they felt that the education secretary’s stance on education-related issues contradicts the students’ and the university’s beliefs and values. “We have to stand up to that, not back down to it,” Smith-Brown said.

Some students participated in a “class walkout” and others took to social media sites such as Twitter to express their grievances and began using the hashtag, “#NeverBetsy.” A second protest, a rally at Gordon Plaza, attracted students who said DeVos’ support of school choice, and other controversial education policies, made her an unfit candidate for a commencement speaker.

Among those who do not want the education secretary to speak is Maryland Democratic gubernatorial candidates Alec Ross, and former NAACP president Ben Jealous. Both candidates spoke out against DeVos’ selection as graduation speaker at the rally.

“I fully support universities bringing controversial lightning rods to campus — pretty much any day except for commencement,” Jealous told The Washington Post. “On a day like that they should have a speaker that affirms those students’ values, their vision for their lives — not someone who seems antagonistic to the very idea of public education itself.”

However, UB president Schmoke, a former Baltimore mayor, defended his decision to invite the education secretary citing the university’s commitment to free speech and because he felt that students should “hear from people with a wide range of views on topics that affect universities.”

The university president went on to add that, “the university stands for debate on controversial issues. I do feel that having the U.S. Secretary of Education on our campus is something that’s very important for the university, and in the long run, I believe that students will recognize that whether they agree with her position on issues or not.”

Fall commencement is scheduled for Monday, Dec. 18 and many students say that their graduation speaker should reflect and embrace the variety of achievements and aspirations of the student body and the best ideals of the institution.

It is unclear if Schmoke will give in and rescind the invitation, but as of late, DeVos has accepted the invitation and will give the commencement speech to be held at the Modell Performing Arts Centery at the Lyric.

Earlier this year, students at Bethune-Cookman University (B-CU), a historically Black university in Florida, expressed similar sentiments about their president’s decision to invite DeVos to speak at the institution’s Spring 2017 commencement ceremony.

Dr. Edison O. Jackson, the former president of B-CU, received criticism from alumni, students, and activists for his decision to invite the secretary, but defended his stance — like President Schmoke — by acknowledging that “it does not benefit our students to suppress voices that we disagree with or to limit students to only those perspectives that are broadly sanctioned by a specific community.”

During the B-CU commencement ceremony, DeVos’ speech was met with turned backs and jeers from some students, and some students walked out during the speech.

DeVos may face similar treatment again as a survey disseminated Friday by UB’s SGA revealed that more than 80 percent of respondents did not want DeVos to speak at the commencement ceremony.