Haddon Helps Rutgers-Camden Bring Out the Best Across the Board

Sporting a red Rutgers pin, Phoebe A. Haddon exudes an aura of staunch leadership and certainty about her institution’s transformational role in the lives of students. She is the first African-American woman to lead the Camden campus of the state university. 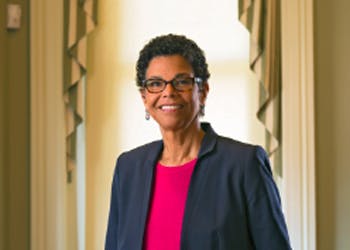 Under her leadership, students, faculty and staff are completing more than 432,000 hours of community service in the surrounding Camden area. Many first-generation and low-income students are conducting extensive research with faculty and going abroad for the first time, and many students are paying less for a world-renowned education.

Rutgers University President Robert Barchi describes Haddon as a “brilliant scholar and gifted administrator,” and from 2012 to 2015, she was named as one of the “25 Most Influential People in Legal Education” by the National Jurist.

Before assuming her role as chancellor in July 2014, Haddon served as dean of the University of Maryland Francis King Carey School of Law. During her tenure, the institution benefitted from new academic resources, a climate of intellectual vigor and a $30 million gift.

Haddon was also a distinguished faculty member and scholar of constitutional and tort law at the Temple University Beasley School of Law for more than 25 years. Here, she met another female faculty member who encouraged her to attend HERS, a women’s leadership institute that trains women to become leaders in higher education.

She was also inspired by her maternal aunt, whose testimony as a school board chair was used in the Keyes v. Denver Public Schools Supreme Court decision for desegregation in Denver. “She was an educator,” Haddon shares about her aunt. “She was not a lawyer. But she used the law in a way that was reflective of what I aspired to do.”

Students at Rutgers–Camden look to Haddon as a mentor, advocate and model for excellence who is not partial to “any single demographic,” says SGA President Tooba Hussain. Students say she is approachable, with a unique professional and personal touch.

“She is also one of the best listeners I have ever met,” says Michael Van Stine, a graduate student senator on the SGA and a member of the Rutgers–Camden Board of Directors. “I think that is so important in a leader. She was only a few days in to her appointment, and she had already met with most department chairs … became a board member of the LEAP Academy in Camden, figured out ‘who was who,’ large and small, on campus and set a new, highly enthusiastic tone that was widely embraced by all.”

Hussain, a Pakistani-American Muslim woman, was initially hesitant about attending law school but says the chancellor “obliterated that concern” by reassuring her about the need for more diversity in the field of law and advocacy.

Chancellor Haddon says students cannot imagine themselves in positions of success if they do not have individuals who look like them or have experiences like them in faculty and mentoring positions.

Rutgers–Camden’s Committee on Institutional Equity and Diversity (CIED) is the faculty-driven council that helps the chancellor achieve diversity within the faculty. Recruitment involves casting “a wide net” for the best scholars across the board, she says, which means that the university gets quality and a diverse group of candidates. She adds, “And if you don’t get it the first time, you try again.”

“I can earnestly say that Chancellor Haddon has contributed immensely to making attending Rutgers–Camden nothing short of a privilege, in the sense that I am pushed every single day to reach my utmost potential, while nonetheless being encouraged to hold fast to my identity and principles, thus affirming the fact that diversity is and should be viewed as a strength, not a weakness,” Hussain says, adding, “Chancellor Haddon has made this ideal a reality for the students of Rutgers–Camden.”

Through increased financial support, Rutgers–Camden has allowed students to become more active on campus and in the Camden community. About 30 percent of enrolled undergraduate students are involved in extracurricular activities. Students also partner with faculty to conduct original research in multiple disciplines or complete internships.

During her tenure, the university implemented an access focused opportunity called ‘Bridging the Gap’ in 2015, which expands affordability and access to the institution for many underprivileged students. The program reduces low-income students’ tuition costs after federal Pell grants and state aid are applied to their financial accounts.

Students are “doing their schoolwork, and they’re also participating in other organizations because this frees them from the need to work multiple jobs in order to support themselves,” Haddon explains. Even students whose families are in the highest income bracket — $110,000 and above — can receive institutional assistance, bringing access to education to all students.

“Growth [for the university] was very important, and growth through an access focused vehicle was just perfect to me in order to create the opportunities, particularly for people of color and first-generation students,” Haddon says. Bridging the Gap also helped the institution understand why even students who do receive support “feel strapped” because of concerns of long-term debt.

As the overall Rutgers University system made efforts to keep the cost of attendance down, Rutgers–Camden specifically focused on students’ needs for more support, Haddon says. Now, the institution also uses data-driven ways to find out if a student is having trouble early on and may need an intervention through advising or faculty mentoring.

With regard to increasing opportunities for students, Haddon says, “What I really love about this place is that it is essentially first-generation, and it has enabled people who could not have imagined themselves in these particular roles to do well and do good, both in terms of civic engagement but also themselves, to enhance their own ability to grow.”

Many students are also getting the chance to study abroad for the first time, with options to enroll in courses in 11 countries. The South Africa programs are popular and the school has sent students there for more than 20 years. Traveling opportunities give Rutgers–Camden students a global awareness outside their South Jersey “microcosm,” which they can then use to enhance their academic and career goals.

Haddon places an “explicit focus” on Rutgers–Camden becoming a part of the city’s revitalization efforts, through the building of new campus and community facilities and students’ civic engagement, allowing the institution to establish itself as a community anchor with the ability to problem-solve.

Students at the university work with more than 200 community partners in the Camden and South Jersey area on service and research projects. Almost 80 percent of students participated in community service initiatives during the last academic year, and the school estimates that it positively impacted more than 11,839 Camden residents during the 2015-2016 academic year.

Some of the civic engagement initiatives run by Rutgers–Camden include the Center for the Arts, the Street Law Project, the Small Business Development Center and the Child and Family Advocacy Clinic. Partnerships also exist between the university and local organizations like Project H.O.P.E., Get Healthy Camden and New Jersey Farmers Against Hunger. Because of President Trump’s immigration crackdown, undocumented community members look to the Immigrant Justice Clinic at Rutgers–Camden’s law school for assistance. The clinic receives numerous calls, even though it is not the most well-known organization helping support immigrants, according to professor and director of the program, Joanne Gottesman.

“We want to impart on our students that you have a role to play … that everyone needs to be civically engaged in order to create good places, be they large cities or smaller cities that are struggling,” Haddon says. “But particularly when you’re part of a city, you must partner with the city.”

A new nursing and science building is slated to open next to City Hall in September, and the school is working to build a new corridor between the Rutgers–Camden campus and Cooper University Hospital, the largest health care provider in South Jersey. Keeping economic development in mind, the institution hopes the research corridor will draw more students, more foot traffic and more retail opportunities into the city.

In June, Camden Mayor Dana Redd, a graduate of Rutgers– Camden, joined Haddon for the opening of the university’s new Welcome Center. She applauded the university’s efforts to not only provide a space for prospective students and their families, but also for new visitors to the city of Camden.

“We salute Rutgers–Camden for helping to lead the charge for transforming an urban center into a wonderful shining anchor in the state of New Jersey,” Redd said at the opening ceremony. “We look forward to incredible partnerships in the years to come.”

Plans for a new school of business and workforce development center are under way, and the school completed renovations on the Writer’s House and Alumni House, says Van Stine, the board of directors member.

In only three years, Chancellor Haddon has balanced Rutgers–Camden being a part of the Rutgers University system with the fact that it is in Camden, which has historically been a troubled city, says Dr. Andrew Shankman, associate professor of history and a faculty council member. “She listened very carefully to our needs … [making] access the central part of her agenda in all kinds of ways,” he says.